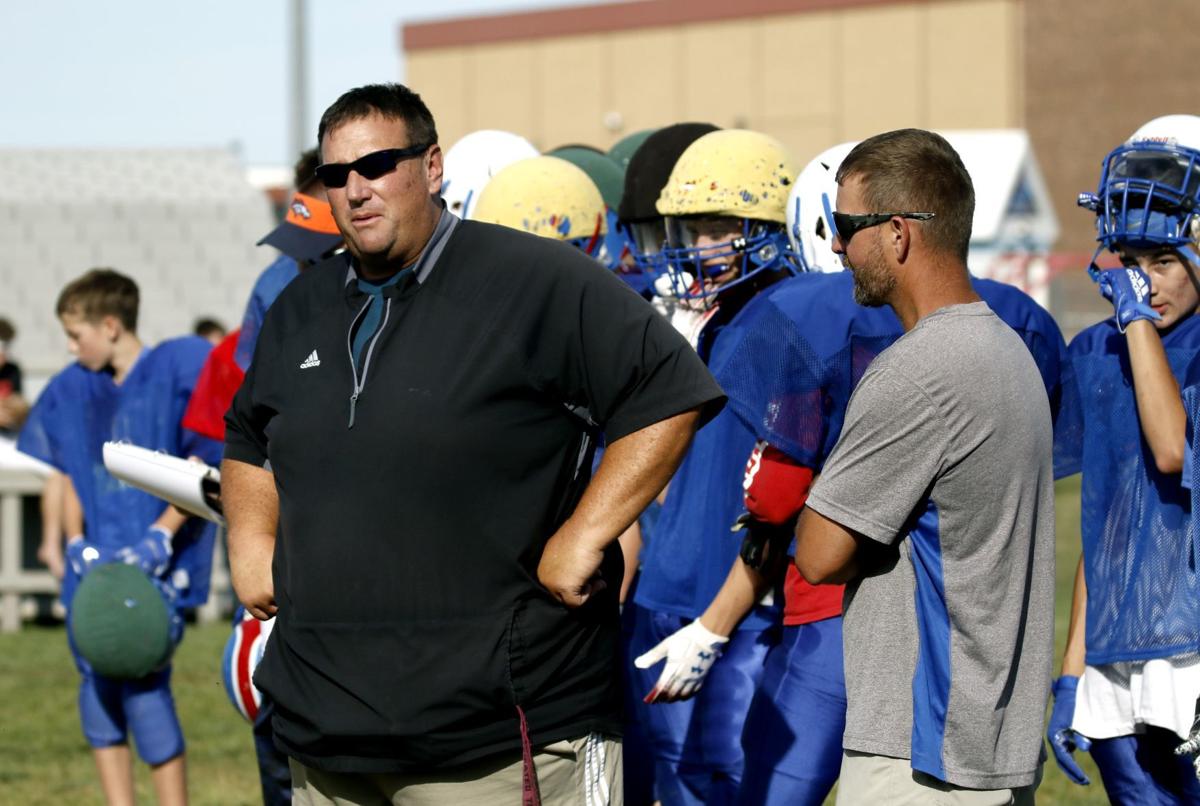 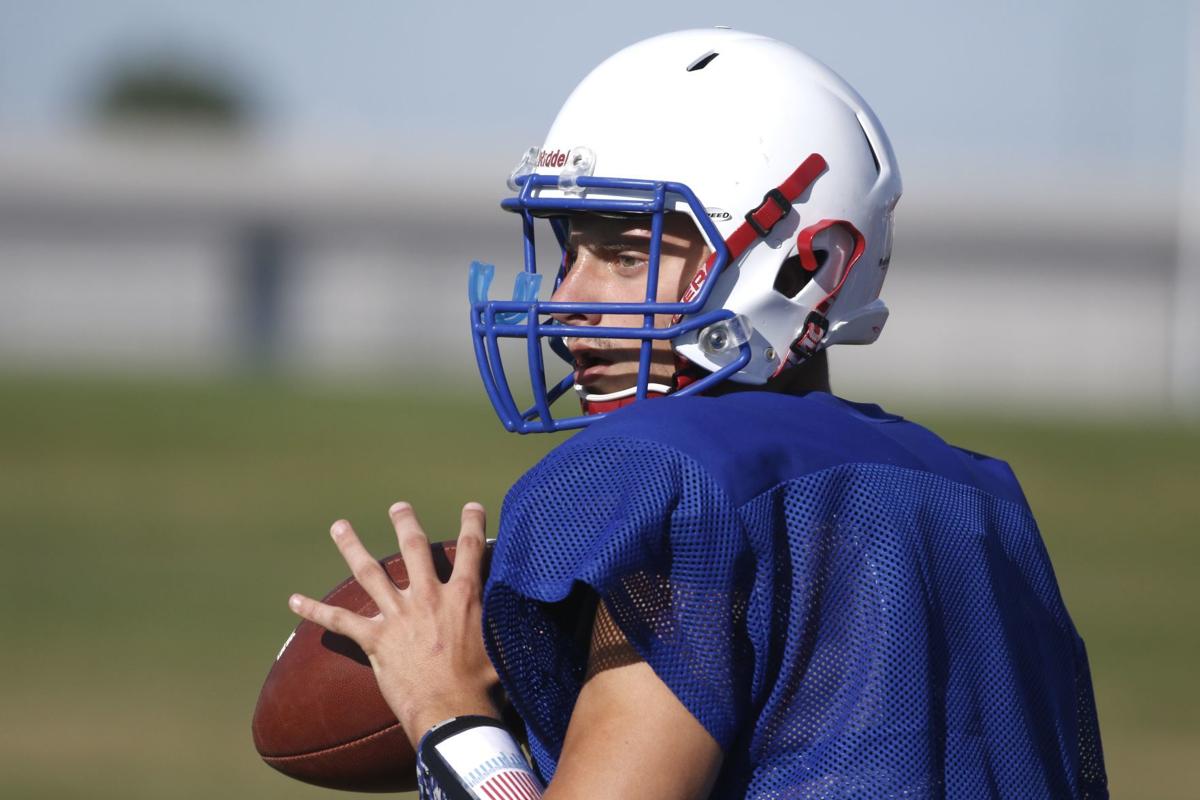 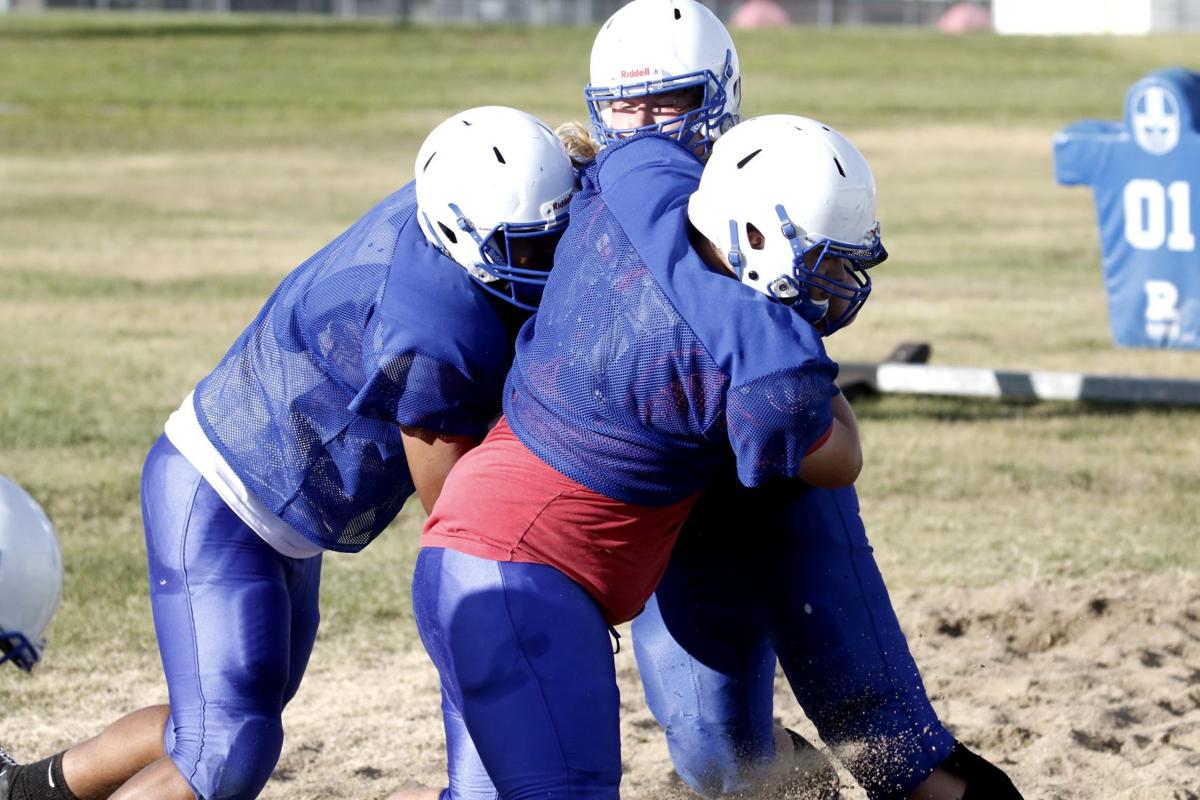 Douglas linemen work on a drill in the sand Wednesday during practice. 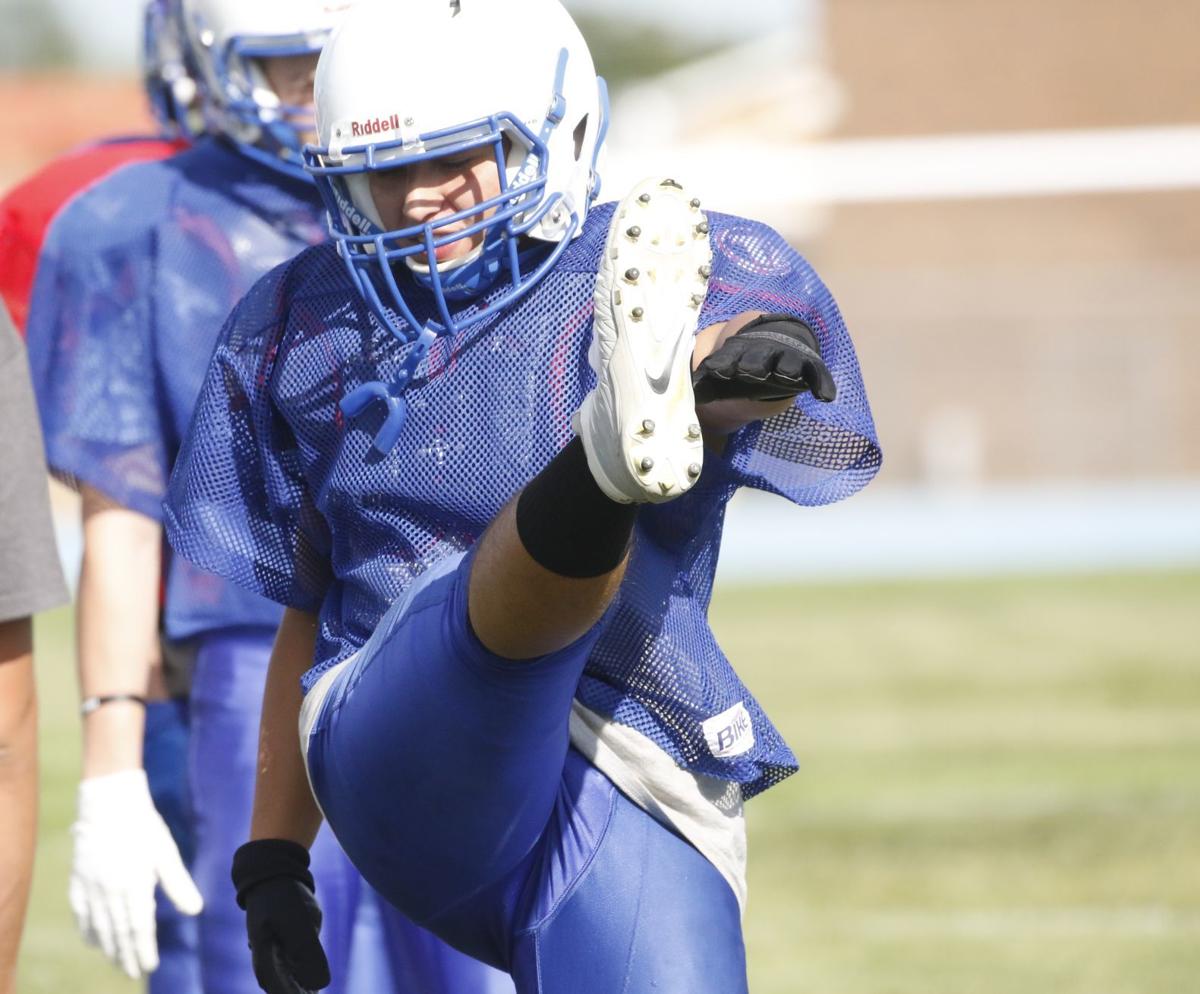 Dan Maciejzak grew up a football player at Douglas High School, Chadron State College and in indoor leagues as both a player and a coach.

He loves football. More importantly, he loves his players, past and present, and what they stand for growing up in military families, just like he did,

In his eighth year as the Douglas Patriots head football coach, Maciejzak isn't going to forget their sacrifices, and he hopes his current players don't either.

This season the Patriots are honoring the military by wearing stickers of the Air Force, Army, Navy, Air Force, National Guard and Marines on the back of their helmets.

Many past players and students keep in touch with Maciejzak, and recently some of those conversations centered around, "Yeah coach, I wished I would have played football (in college) or I miss football."

Maciejzak had a simple response to those conversations.

"I said, 'What you are doing is more important than playing college football.' It started me thinking as a coach, 'Am I always passing on the right message to my kids?'"

He found the military stickers and decided that every player is going to wear a different one.

"I want my guys to understand that there are bigger things than just playing college football. Defending our country, to me, is the biggest honor you can do," he said Wednesday before the Patriots practiced for their season opener Saturday at Mitchell.

"I wanted my guys (in the military), who have played here at Douglas, to know that we don't think of them as second best as a lifestyle, compared to my son (Jared), who is playing college football (at Chadron State)."

The Patriots usually get out on the practice field at about 4 p.m. At 5 p.m., when applicable, they stop practice, face Ellsworth Air Force Base, take their helmets off and stand at attention to the National Anthem that plays over loud speakers.

When it is over, they get back to work.

As a youngster, Maciejzak remembers his father pulling the automobile over on the base, getting out of the car and doing the same thing.

"Around here everybody understands how close to home it really is. A lot of these kids' parents are gone overseas or doing different things," he said. "When you talk to different kids, football to them is kind of a mechanism to family. We're not like some of the towns and communities in the state of South Dakota. It is a tool for us to build a bond. It is a tool for them to be able to appreciate what is going on, and to be proud of their parents and be honored for what their parents do."

Douglas senior running back/linebacker Jaiden Walton, whose mother is in the National Guard, appreciates what they do.

Daniel Gleason, a senior linebacker/running back, also comes from a military family, as his father is retired Air Force.

"Not everybody wants to play football for us, but they go and serve our country," Gleason said.

On the football field, the current Patriots are about persevering as well, as a very young team last season failed to win a game.

Still a young team with 26 juniors and just five seniors, Maciejzak believes things are beginning to turn around. Last season there were only about 30 players on the roster. This season, he said they are pushing 60.

"Our kids did take their lumps last year and we did as a coaching staff," he said. "I think the difference for our kids is they took it to heart. We had thirty-some kids in our summer program, and that is working out, training and football camp. I think it has paid big dividends for us. I'm not saying we are going to go out and win a state championship, but last year we fought and took some beatings. This year we're going to fight and hopefully pass out some beatings."

Offensively at quarterback for the Patriots will likely be junior Anthony Ramsey, a transfer from Tennessee. At tailback, another transfer, Tyler Clark, from New Jersey, will be the starter, with Payton DeWitt, Walton and Gleason seeing action.

"We have a group of tailbacks that I feel confident with again," Maciejzak said.

Up front, Maciejzak said they are young but could be the biggest line he has had since returning as coach, averaging 6-foot-3 and about 265-270 pounds.

"They are a bunch of good kids who have stepped up and become a group and family this summer. They put the time in so they can be a good offensive line," he said.

Defensively, he said that assistant coach Nate Batteen has the team flying around again.

"Coach Batteen did a good job of installing some new stuff and getting our kids to swarm to the ball, doing some great things fundamentally," he said. "I think it is some of the things we missed last year being so young."

Walton said their struggles last season got the players in check for this season.

"Last season a lot of kids were going into it thinking that it would be a breeze," Walton said. "It was an eye-opener and made kids work hard in the off-season. Now we're working 10 times harder."

While Maciejzak looks for marked improvement from his squad, he also knows that nothing is easy in the Class AA ranks. In fact, he said it is the toughest schedule that he has had as a coach.

"We have to stay healthy, we can't lose kids. Playing Pierre, Yankton and Brookings, they are all bigger than us and very good football teams," he said. "We play all AA's except St. Thomas More, and they have AA talent, and Belle Fourche (Class A), which isn't a slouch either."

Gleason said the key for the Patriots this season is to continue to work hard in the weight room, on the field and watching film.

"We're going to come back. It is not going to be like last year,' Gleason said. "That is in the past, and we've gotten past that. It's all about this year."

Douglas linemen work on a drill in the sand Wednesday during practice. 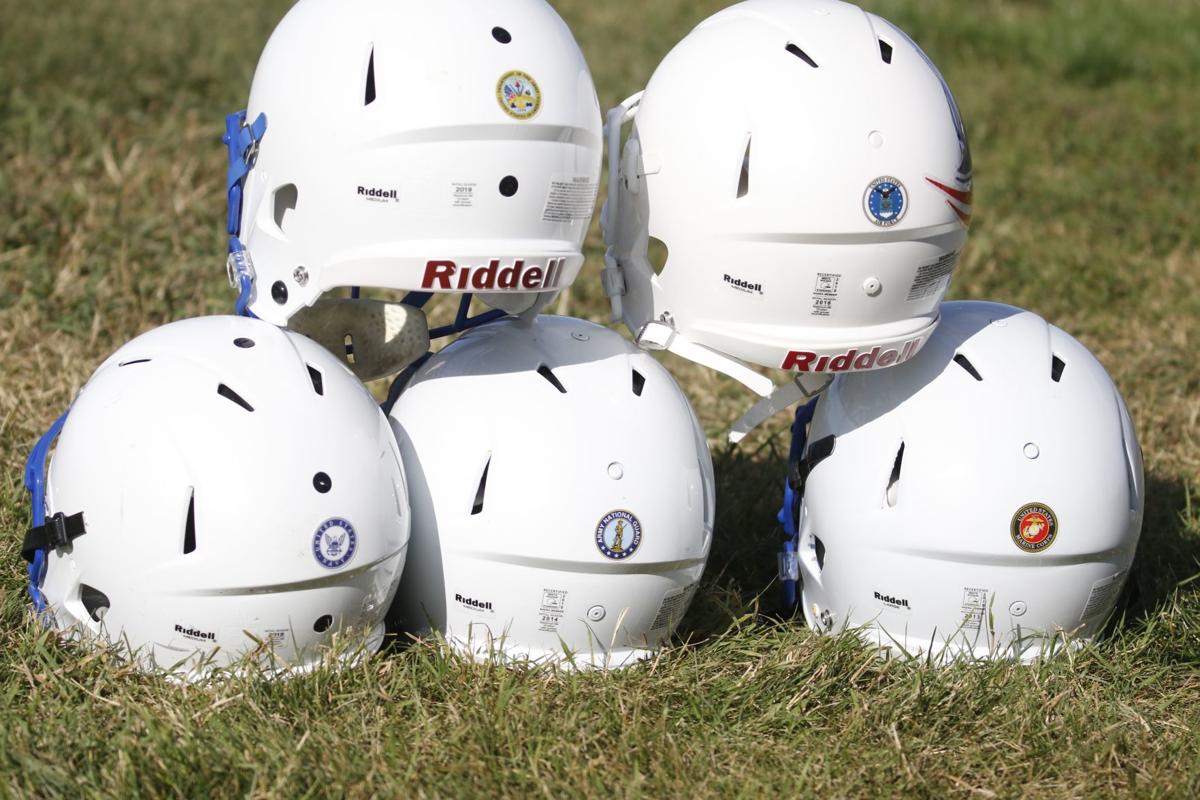 The Douglas Patriots football team is wearing military stickers in honor of the former players who have served or are serving in the military today. The stickers honor the Air Force, National Guard, Army, Navy and Marines.