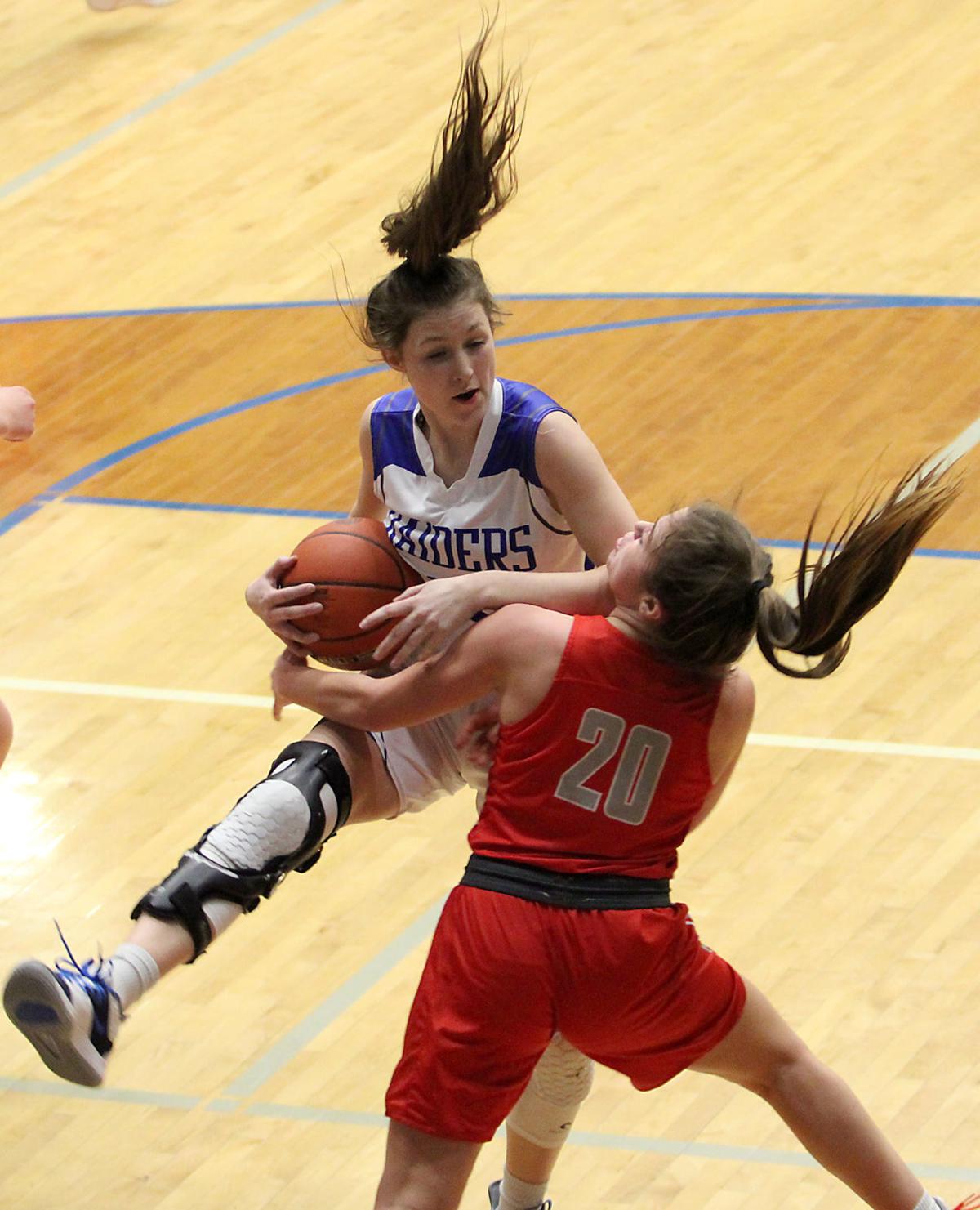 Grace Martin from Rapid City Stevens wins possession of a rebound from Central's Morgan Sullivan Thursday night at Carold Heier Gymnasium. The Raiders held on for a 29-26 win. 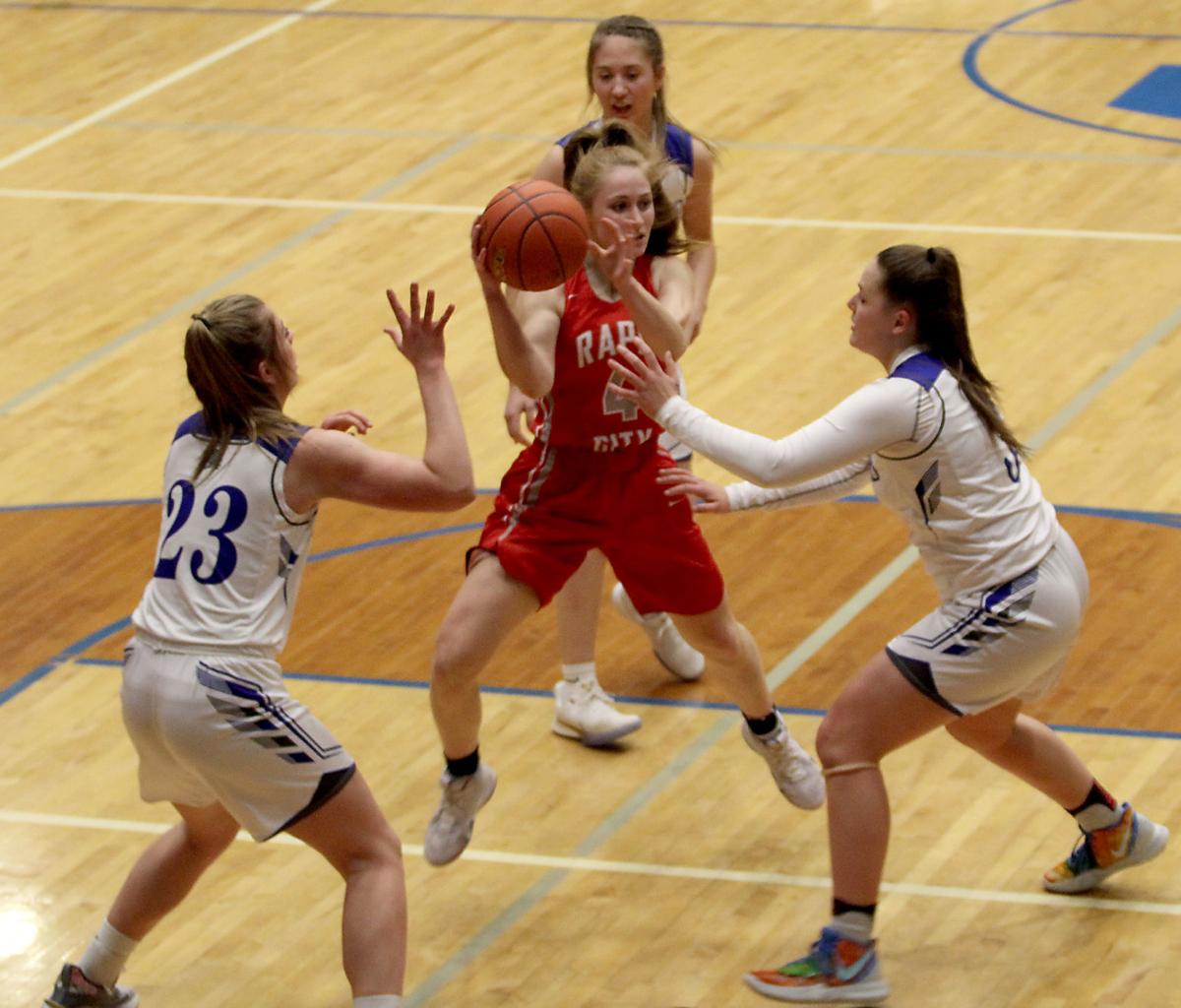 It was a grind for the Rapid City Stevens and Rapid City Central girls' basketball teams Thursday night at Carold Heier Gymnasium. A slow grind.

It was also Cobblers-Raiders, where anything can happen.

The third-ranked Raiders, who went into Thursday night averaging 62 points per outing, somehow held off and rallied late to edge their arch rivals, 29-26 in a defensive battle that basically went down to the final seconds.

Credit Central and head coach Kraig Blomme for slowing down the pace and packing it in defensively when Stevens struggled from the outside.

The strategy nearly enabled the 6-9 Cobblers to pull off the upset.

"I told the girls that if the game ended up in the 60s, we would have no chance of winning the ballgame," Blomme said. "If we're able to keep it down to the 40s or below, I thought we would have a chance to win. The girls played great defense and I'm proud of the way we played."

The Raiders moved to 14-1 on the season but had to win a game like they had never won this season.

"We just got done saying in the locker room that it goes down as a win, whether it is pretty, whether you played your best," Swartz said. "In the end, we pulled it off. In the end we did it in different ways and we had to do it slow, we had to try to execute some things. It will be a good game to learn from."

Neither team shot much over 20 percent from the field from the start, with the Cobblers leading 7-4 at the end of the first quarter. The game tied at 14-14 at halftime and it was 23-16 in favor of Stevens going into the final eight minutes of regulation.

The Raiders opened the fourth with the first basket, but didn't score again until 43 seconds remaining after the Cobblers had run off 10 straight for their first lead since early, highlighted by two straight steals and layups by Emma Avery and Jordon Heckert.

"I could really feel the momentum turning," Blomme said. "We just ran out a little bit of time and had some unfortunate things happen down the stretch."

Stevens sophomore Jada McNabb, who hadn't previously connected from the field, got her first and biggest basket on a putback to put the Raiders back out in front 27-26.

Central was called for an offensive foul with 25 seconds remaining, only to see the Raiders turn the ball back over with 12 seconds left.

But Central's leading scorer, Heckert, couldn't connect with 5.6 seconds remaining and Stevens sophomore Jaden Matkins got the rebound. Central was called for an intentional foul and Grace Martin hit 1-of-2 free throws. Stevens retained possession under the Central basket and the Cobblers nearly got the steal, but fouled with .4 seconds.

Stevens sophomore Bailee Sobczak hit 1-of-2 free throws to make it a three-point game, missing the rim on the second attempt that allowed the Cobblers  one more chance. Heckert caught the inbounds pass at midcourt and appeared to get the shot off, but it was well short and off the mark.

"We definitely shouldn't let them score 10 in a row," Matkins said. "But I think at the end, we pulled together and said, 'We have to be smart here, make good decisions and passes, and don't do anything crazy."

The Cobblers slowed the game down as much as possible with the shot clock, often not getting into their offense until under 20 seconds remaining. It took away a few Stevens possessions and opportunities to score.

"There were several possessions where it was close in the second and third quarter where we did want to take 10 to 15 seconds off of the shot clock before we got into what we were going to do, to try to shorten the game," Blomme said. "If we would have shot a little better in the first half when we had a lot of good, open shots, it might have been a different story in the end."

Swartz said they have to be able to play that half-court game, and he credited Central for changing the style.

"We teach our kids to attack the zone inside-out, and tonight for some reason, we did it the opposite," Swartz said. "We tried to go outside-in, and when you are not hitting outside, everything is packed in and we couldn't finish on their bigs."

In the end, though, Swartz said his team battled and got the win.

"You look at our roster and some of the kids who get a lot of minutes, it's their first Raider-Cobbler game too," he said. "I'm not making excuses, but it is a big deal to them. I'm proud of them to battle and win in a way that has not been done before."

There were no double-figure scorers in the game — Heckert led Central with nine points, while Matkins scored seven for the Raiders.

"It was really close the whole time. We need to be a little smarter in a couple areas, but I think other than that, we worked really hard," Matkins said. "We just have to keep working and fix some things."

Swartz is looking forward to the rematch at Howard Naasz Gymnasium.

"This is what basketball is all about ... rivalry games," he said. "I'm from a small town and I was telling the girls, this is what it is like almost every night in a small town, because you are rivals with everyone. I'm glad they get to experience this. It's pretty fun for them."

"It was a good, close ballgame, and we'll see what happens again in a couple of weeks," Blomme said.

Grace Martin from Rapid City Stevens wins possession of a rebound from Central's Morgan Sullivan Thursday night at Carold Heier Gymnasium. The Raiders held on for a 29-26 win.