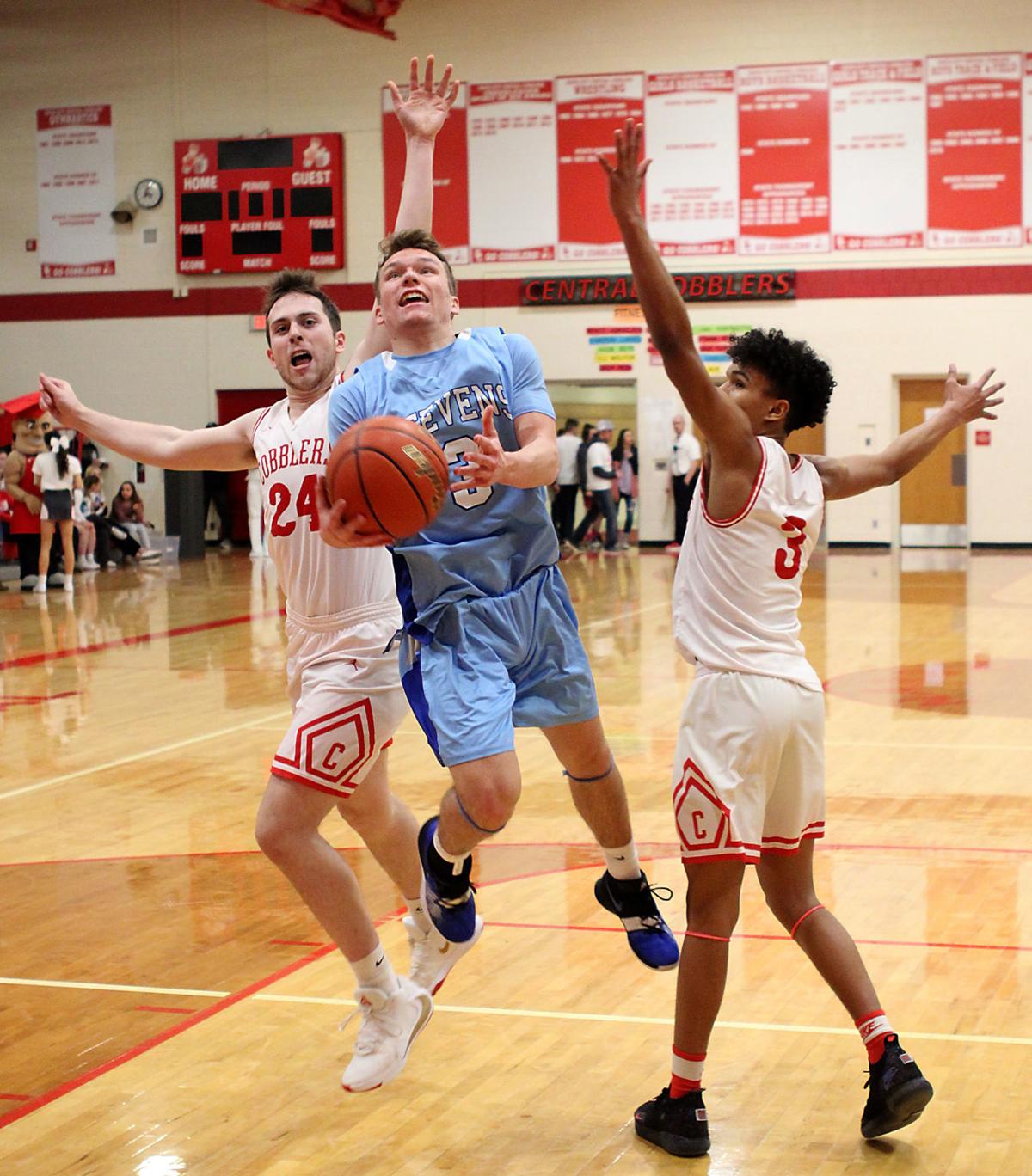 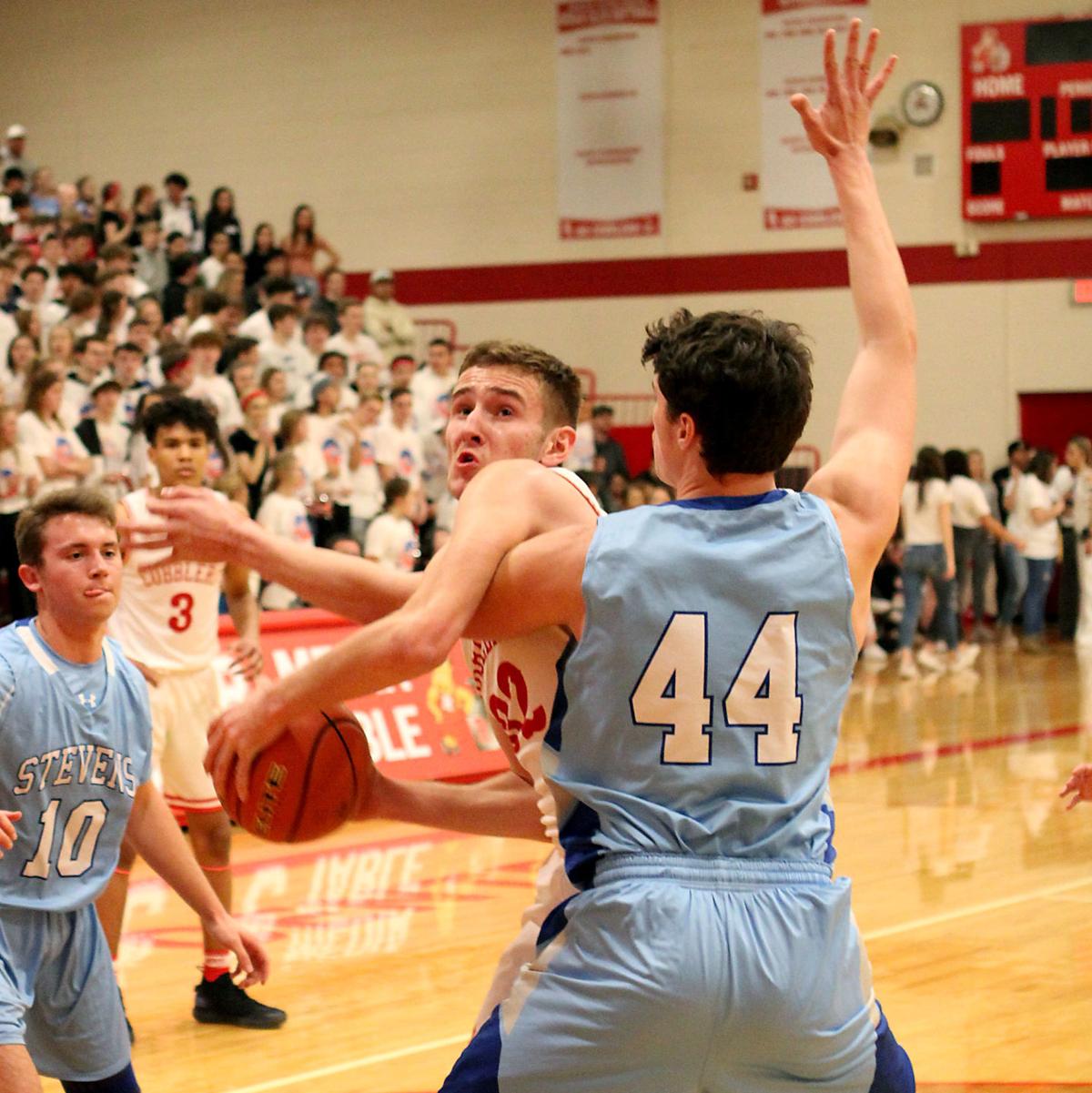 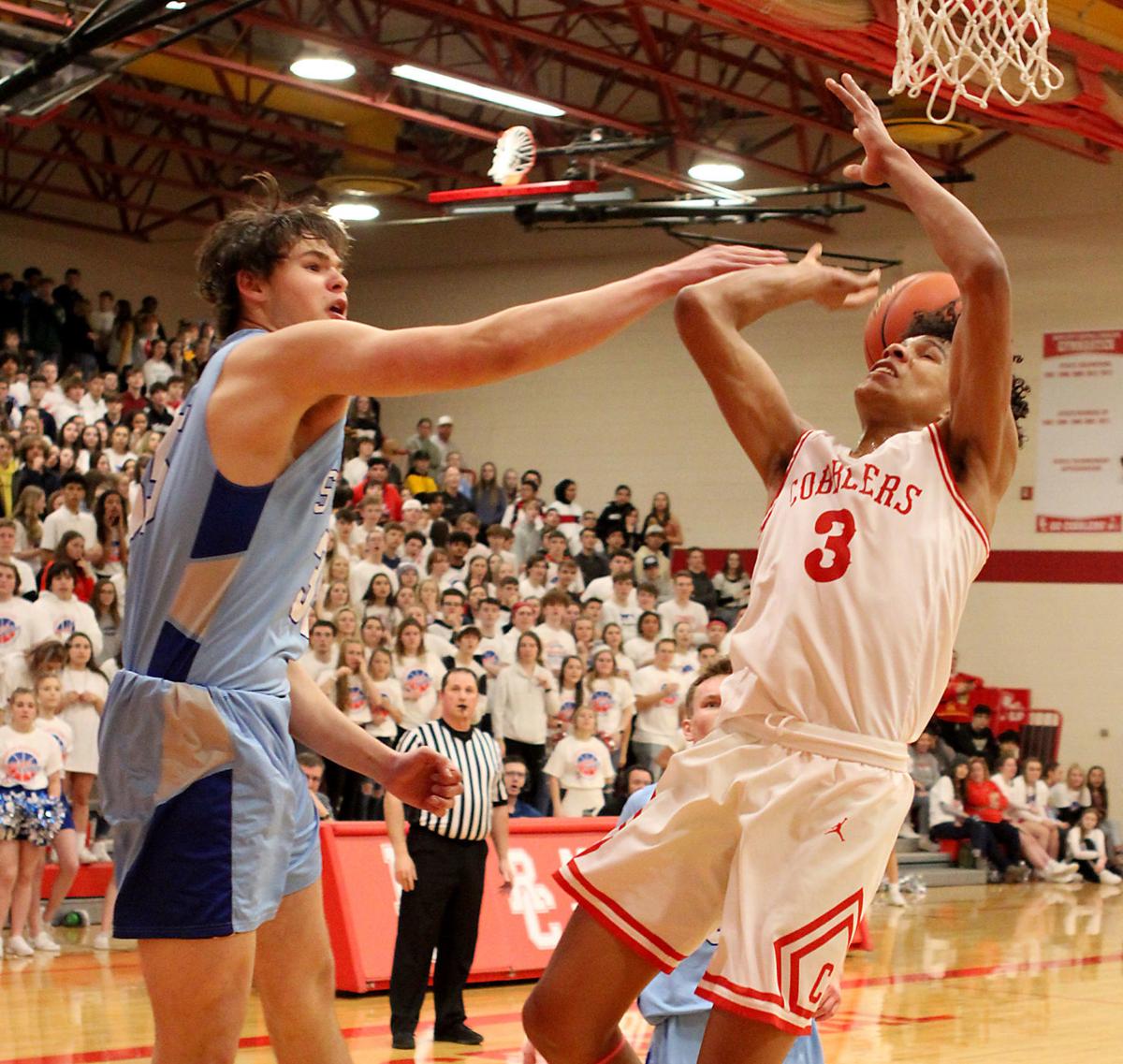 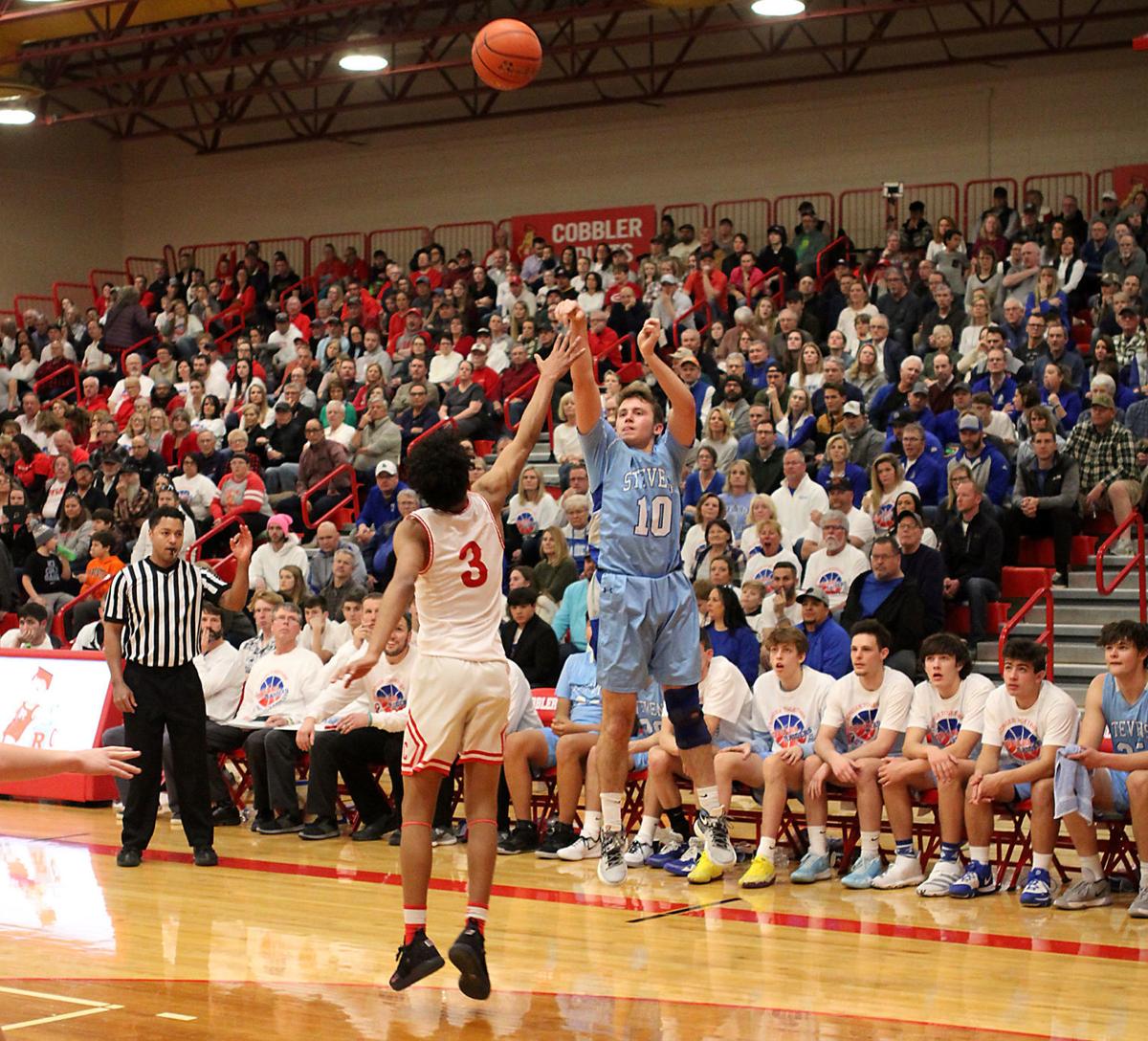 Rapid City Stevens senior Blake Weaver knocks down a 3-pointer in front of his own bench and a packed house Thursday night at Rapid City Central. 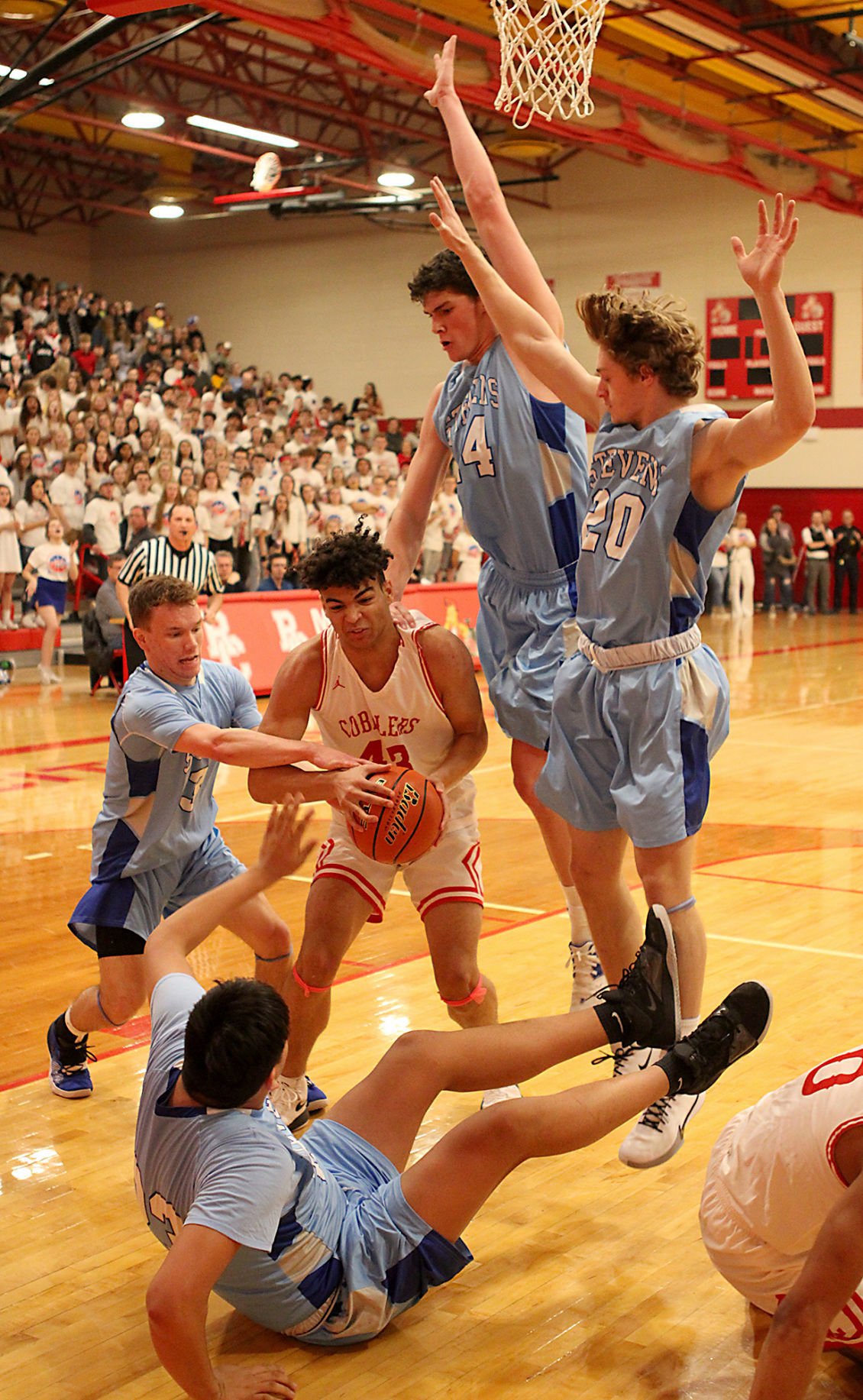 Vigoren went and so did the Raiders, running past rival Rapid City Central in the in the second half for a 70-54 win Thursday night at a packed Naasz Gymnasium.

Vigoren scored a game-high 25 points as the Raiders took control in the final eight minutes to earn the regular-season sweep and win their fourth straight game, handing the Cobblers their seventh straight defeat.

There were three ties and five lead changes in the first quarter alone, with the Raiders scoring late to take a 21-15 lead at the end of the first quarter. Stevens led 35-30 at the halftime break and 53-47 going into the fourth.

Central opened the fourth with the first basket to pull within four, but the Raiders used a 14-3 run to take control down the stretch.

Stevens coach Chris Stoebner said they finally got some stops, and that led to fastbreak opportunities.

"We also got some defensive rebounds, holding them to one shot, and then we were able to get out and make some easy ones at the other end," he said as the Raiders moved to 12-6 on the season.

Often the smallest player out on the court (5-foot-9), Vigoren made a living driving to the basket or stepping back and hitting 3-pointers.

It's basically his game of stop me if you can.

"Coach was just telling me to attack the hoop, and if they don't stop me, go all of the way," he said, scoring 12 points in the first half and 13 in the second — 11 in the third quarter. "If they do stop me, find the open shooter."

Central coach TJ Hay said they wanted to take away Vigoren's left hand, but they didn't do it; they didn't execute as to how they could have.

"We have kids who are quick enough to guard him, and tonight we didn't," he said. "We'd get our weight going up over our toes and he goes by you. You just can't do that, and he did a nice job finding guys when we rotated over to help. I'm just disappointed with our defensive effort."

Vigoren was 9-of-15 from the field, hitting 3-of-7 3-pointers. He also grabbed a game-high nine rebounds — four offensively and five on defense.

There was a stretch this season when the Raiders were struggling with their rebounding, and Stoebner said he told Vigoren to start crashing the boards.

"I said, 'Go get some offensive rebounds, go get putbacks or those types of things, maybe it will give you some confidence when you struggle from the outside,'" he said. "He's done that, and now he is playing with as much confidence as he has played in his career. And it rubs off on the whole team."

Central junior Micah Swallow almost matched Vigoren early with 10 first-half points. His basket tied the game at 12-12 before Stevens senior Colton Hartford and Central junior Julian Swallow traded 3-pointers. But the Raiders closed with six straight points and never trailed again, although Central hung in there until the final quarter.

The Raiders, behind Vigoren, built a 12-point lead in the third only to see the Cobblers get four points from senior Trey Brandhagen off the bench late to make it a six-point game at the end of three.

Micah Swallow's basket to open the fourth cut the lead to 53-49, but Vigoren answered and senior Blake Weaver hit five straight points to make it an 11-point cushion again.

Bridger Nesbit rattled home a 3-pointer with 4:48 to play to push the lead to 65-52 and Central never recovered.

"Once again it starts with defense, and then we get to push out and run," Vigoren said.

Stoebner said both teams were making plays for the first three quarters but the Raiders made more plays in the fourth.

"When they would throw a punch, we would come back with a counter punch," he said. "I told them before the game that was what we had to do ... counter them and counter them, and eventually we would get some stops, and we did."

Stoebner said the Raiders did a good job of executing their offense, hitting 53% from the field (25-of-47) and nailing 9-of-17 3-pointers.

"We tried running sets, and towards the end we just said, 'Let them play,'" he said. "They really handled the pressure down the stretch and converted some big-time plays."

Senior Mason Steele finished with 13 points and Weaver 12 points for the Raiders.

Hay said that they can't have one or two guys play decent against a good team, but have to have all five guys on the floor contribute.

"I've told them before, we don't need to do anything extraordinary, we just need to play," he said. "They made some runs at opportune times and we didn't. We miss a layup and they turn around and get a layup. It turns into a four-point swing, and the next thing you now you are down six, down nine. They hit a couple of 3s and the next thing it is double digits."

Stevens hosts Sturgis next Thursday and is at Spearfish March 2, looking to finish strong before postseason play.

"We're playing really well, it's been fun," Vigoren said. "We're clicking again and we have six more wins to go and get that state 'Ship; that's what we're in for."

The Cobblers, 8-10, need to get going soon as they close with Spearfish Thursday and are at Sturgis March 2.

Hay said they are going to take a couple days off and get back after it next week. He said it has to start Monday.

"We have two games left, but our third game coming up (postseason) is the game that matters," he said. "We have to get some stuff going down the tracks in the right direction."

Everything has come full circle for Rapid City native and St. Thomas More graduate Ciara Duffy, as she was named the inaugural Becky Hammon Mi…

The NCAA Division I Council voted Monday to approve an extra year of eligibility for all spring sport athletes who had their seasons canceled because of COVID-19, but the generosity will come with a caveat for seniors:

Rapid City Stevens senior Blake Weaver knocks down a 3-pointer in front of his own bench and a packed house Thursday night at Rapid City Central.