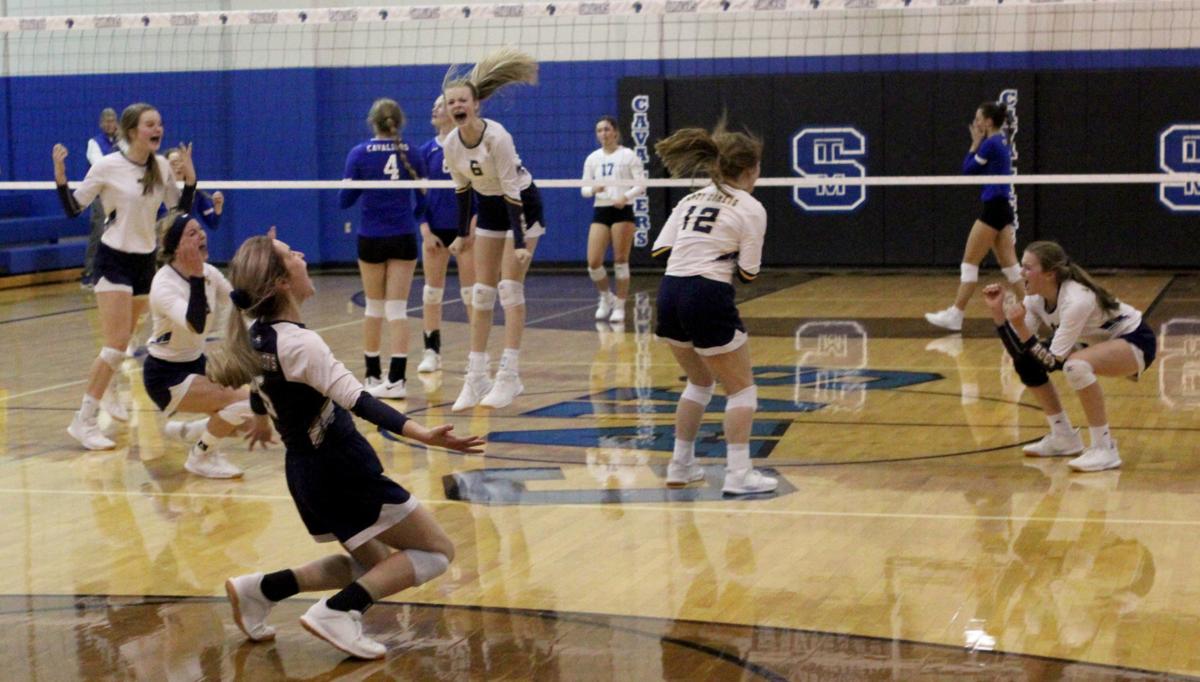 The Rapid City Christian Comets celebrate an upset victory over St. Thomas More Thursday night. The victory qualifies the Comets for the SoDak 16. 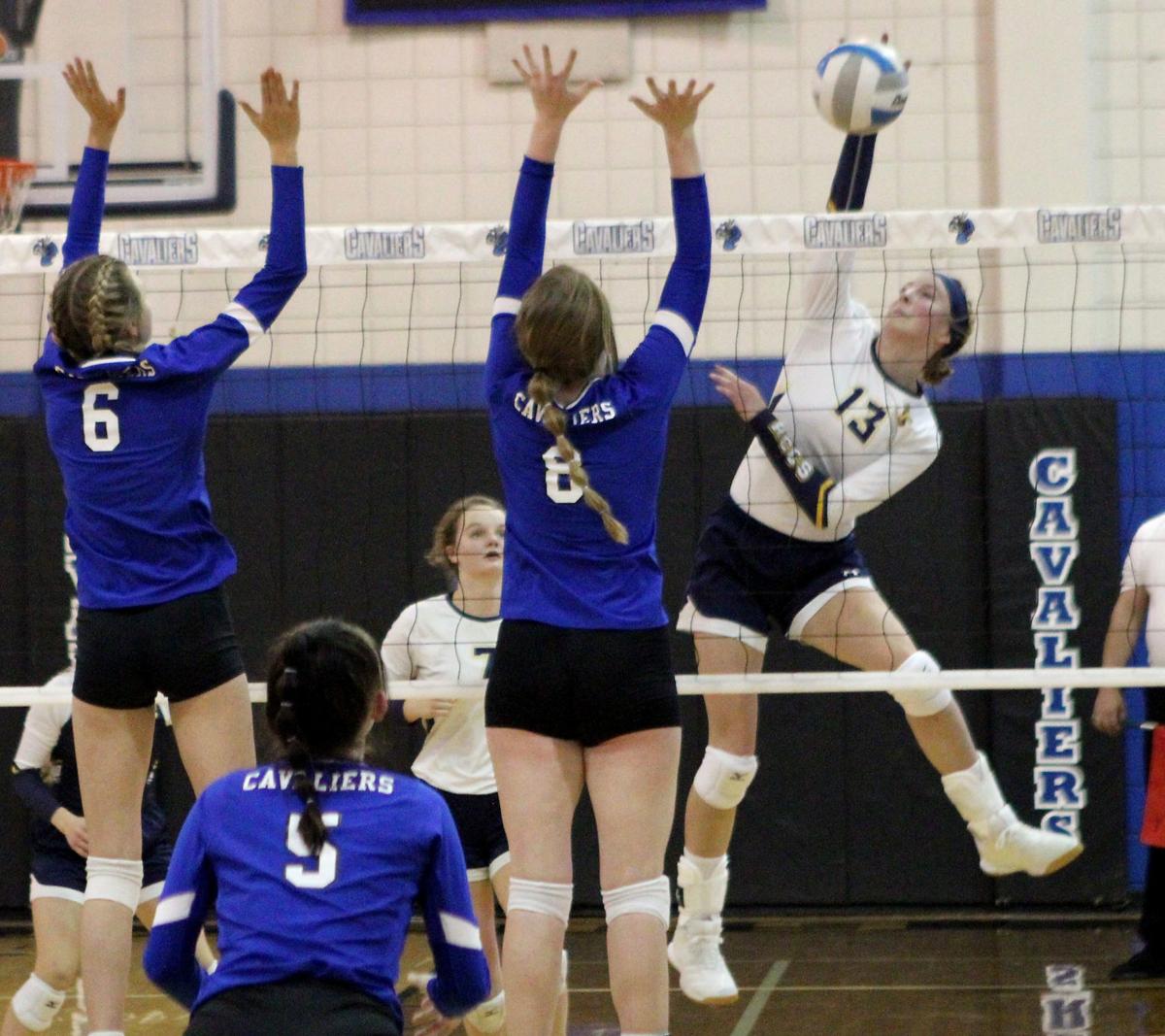 Rapid City Christian's Tori Allstiel drives a kill down the line past the block of St. Thomas More's Reese Ross and Sarah Matthes. 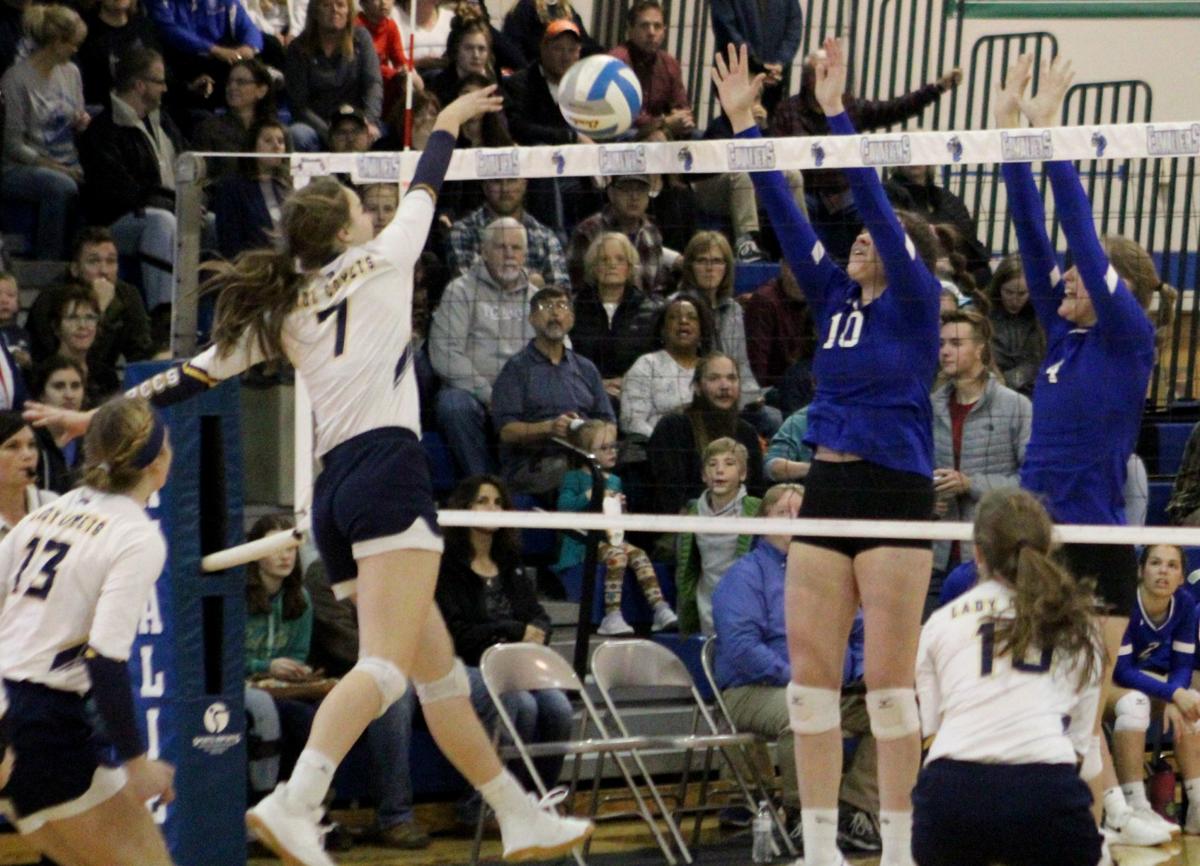 Rapid City Christian's Olivia Kieffer spikes a ball down the line for a kill Thursday night in the Comets' 3-1 win over St. Thomas More.

A year and one day ago, Rapid City Christian upset favored St. Thomas More in an epic five-set contest (15-13 in fifth set) to earn the Lady Comets a first ever trip to the State Class A volleyball tournament.

In Thursday’s Region 8A qualifier, Rapid City Christian (28-6) again played the underdog role to perfection knocking off a Cavalier squad that defeated the Lady Comets in three sets in a regular season meeting and doing so convincingly 25-8, 25-23, 17-25, 25-22.

Rapid City Christian quickly established the game tempo in the opening set unleashing a barrage of hard serves resulting in numerous aces (9 in the first set) and difficult digs by the Cavalier back row that consistently prevented St. Thomas More from moving into attack mode.

Junior Tori Altstiel started the impressive display with three of her nine aces on the night as the Lady Comet’s jumped out to a 4-0 lead. The Cavaliers were never able to claw back into the set as Rebecca Morgan, Emma Shultz and Riley Freeland contributed two aces apiece allowing Christian to cruise to the easy 25-8 first set win.

“That was something that we wanted to do tonight,” Altstiel said above the tumult of excited players and fans. “Come out strong and serve hard and get the momentum on our side early. And by doing that, we gained a lot of confidence and were able to play off of that.”

Despite the first set blowout, St. Thomas More rallied in the second as the two teams battled through numerous lead changes with the largest lead a four-point run by the Cavaliers at 16-all to grab a 20-16 advantage behind a couple of Lady Comet attack errors and an ace by the Cavalier standout Haleigh Timmer.

Undaunted, Rapid City Christian captured nine of the last 12 points to squeak out the set win at 25-23. Another three-point service run by Altstiel and a couple of kills, including a back row attack by freshman Olivia Kieffer— the team leader in kills with 13 in the match — closed out the set.

“I think we did intimidate them a little early with our serving and we were able to dominate points because of that,” Freeland said. “That was probably the biggest difference from the first match we played with them. We got off to a quick start and were able to gain confidence from that.”

In desperation mode and in need of a mojo boost early in the third set, the Cavaliers got just that jumping out to a 8-1 advantage via kills by Timmer —the game leader with 16 — Ciara Benson (11) and Mairin Duffy.

Nonetheless, the set didn’t come easily as the Lady Comets closed to within 15-12 before Benson helped close out the set for the Cavaliers with a couple of spikes and two service aces in the final service game.

Rapid City Christian quickly regained the momentum in the fourth set  capitalizing on five aces in building an 8-2 advantage before the Cavaliers responded behind a couple of Grace Brechtel aces and two Timmer big hits to draw even at 10-all.

The final points of the match featured a back-and-forth duel between the Cavalier’s Timmer and the Lady Comet’s freshman sensation Kieffer, who in addition to left side kills at the net added a couple of backrow spike winners as well.

“That has been a big focus for us, too,” Olivia Kieffer said. “You are not just a hitter on the front row, there are always six hitters on the court and we put a lot of time in being able to do things from the back, too."

Lady luck seemed to favor Christian as well. With the score tied at 20-all, a Altstiel serve resulted in an ace when a dig took a crazy bounce off the ceiling and her next serve caught the top of the net and dropped over for a winner.

A Kieffer blast down the line from her favored left-side outside hitter position set up match point and a Cavalier attack error closed out the match.

“I was really proud of us coming out strong with our serve us tonight. We’ve been working on that and knew it could be big for us,” Coach Elizabeth Kieffer said. “That and being more mentally prepared. I knew it would be a tough game. Scott Benson is a great coach and always has great athletes. We made some adjustments with our lineup since our first match with that, being more mentally prepared, and I think that showed tonight.

"Also, we’ve had a lot of adversity over the last month. Every time we turned around someone was out with a sprained ankle or an emergency of some kind. We haven’t had a full lineup for the last month, so we are so thankful to have had all of our players out on the court for this game.”

For St. Thomas More that closed out the season at 31-6, it was simply another case of coming up just a little bit short.

“They really served well, and actually they did everything well tonight and had us off-balance and, on our heels, the entire night,” Cavalier coach Scott Benson said. “Tori Altstiel is the one that stood out for me. The way she served was phenomenal. We couldn’t do anything with it and couldn’t get into our system and again when it’s one and go home it’s the team that steps up and they stepped up tonight.”

Skylar Sullivan led the Cavaliers in digs with 12 and Sarah Matthes had a game high 35 set assists.

With the win, Rapid City Christian, the No. 6 seed, will meet Madison (No. 11) in Class A SoDak16 action next Tuesday night at a site yet to be determined, with the winner advancing to the Class A State volleyball tournament in Rapid City (Nov. 21-23).

The Rapid City Christian Comets celebrate an upset victory over St. Thomas More Thursday night. The victory qualifies the Comets for the SoDak 16.

Rapid City Christian's Tori Allstiel drives a kill down the line past the block of St. Thomas More's Reese Ross and Sarah Matthes.

Rapid City Christian's Olivia Kieffer spikes a ball down the line for a kill Thursday night in the Comets' 3-1 win over St. Thomas More.