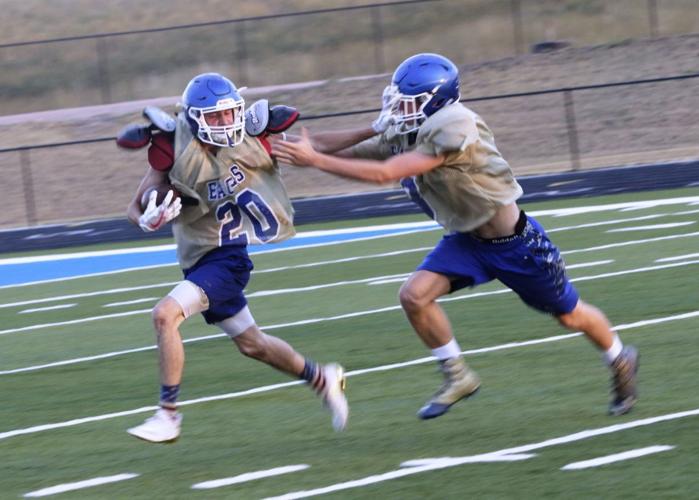 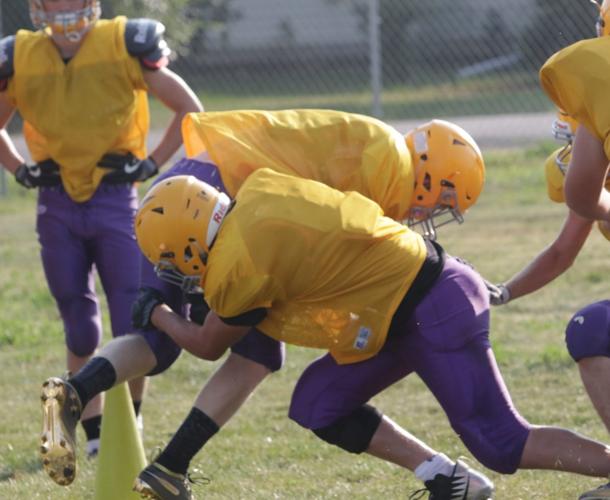 New Underwood linebacker Owen Perry makes a tackle during a drill Tuesday at the Tigers' practice. 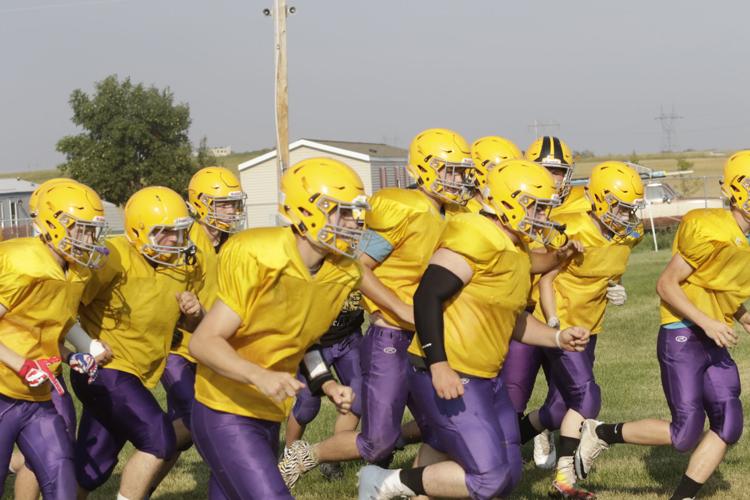 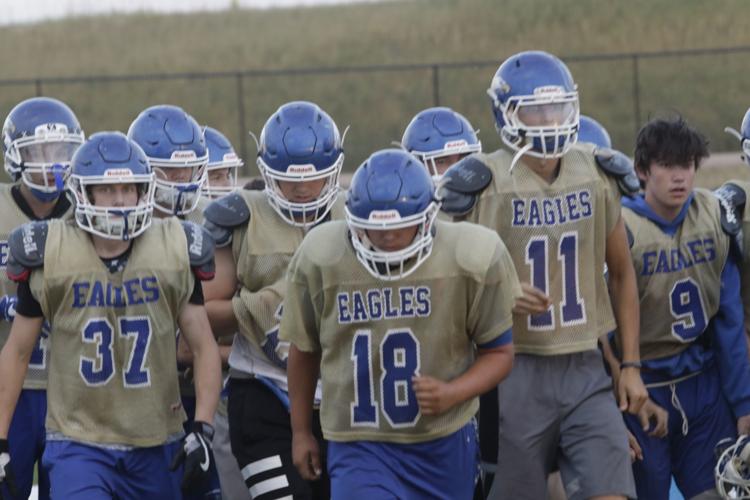 Less than 34 miles separate Wall and New Underwood, and Friday night both football teams open the 2018 season against each other.

The Eagles finished a perfect regular season last year with a 50-0 loss to Castlewood in the first round of the Class 9B playoffs, while New Underwood opens with a new coach.

Both Wall coach Lex Heathershaw and first-year New Underwood coach Brady Carmichael agreed that the biggest part of the first game is shaking off the rust of the summer and seeing how good their players are when they're hitting other players, not their own team.

"I think the key is going to be execution," Carmichael said. "In the first week everyone is coming off summer, knocking off rust, so whoever works their plan the best an executes will probably come out on top."

The plan for Wall is to repeat the formula it had last season when it went 8-0 in the regular season. The Eagles lose only three players from last season, and Heathershaw said his group has been itching to get on the field.

"The first day that we got full pads, you could tell that the guys were ready to go," he said. "We’re excited, everyone is excited. We had a good year last year, we lost three guys who we’ll have to replace because they played both ways but a lot of teams are losing more than three, so we feel very confident that we can have another successful season."

Heathershaw also admitted that facing a new coach is always tough when taking on an opponent, especially in the first game of the season.

Many of the assistants on the staff have been in the program for New Underwood, so Heathershaw said he's hoping to see some of the same things he saw last year from the Tigers.

"That’s always tough, when a team gets a new coach. We don’t expect too much different out of them, but it’s always tough because you don’t have film on them," he said. "You hopefully train your guys to do what we do, and control things on our end. Hopefully, the rest takes care of itself."

Carmichael said he has a group that is hard working, and he is excited to get them on the field so the hard work in the offseason can be put to use.

"I like this group of kids. They’re fairly balanced in age, everyone seems to be on the same page and was in the system last year so we’re hoping we can come out and execute," he said. "It’s nothing flashy, everyone is on the same page, they've bought into what we’re trying to accomplish is our biggest strength."

The game, which will be at Wall and start at 7 p.m., will be decided by the Eagles' tempo, according to Heathershaw. He wants his offense to dictate how the clock moves, and thinks if it can do that his team will be okay.

"Hopefully we can control the tempo of the game. We’ll look to get the run game going, and hopefully we can just keep with that," he said. "We’re very confident in our passing game too so I think you’ll see both things from us on Friday night. We’ve got a lot of guys in good positions and we feel like we have athletic guys across the board so every guy has to do his job and we’ll be alright."

Carmichael is in his first season as a head coach while Heathershaw is in his second. Both teams have been playing each other for a long time, and Carmichael said he trusts that they'll be familiar with what Wall will try to do.

"We know they’re going to be a tough team and we’re trying to plan accordingly," he said. "We know them pretty well, they’re always adjusting like everyone else is so all you can do is go back and look at some of the things you did last year and prepare with the information that you had before."

Both coaches said their players are itching to play a game under the lights for the first time in months.

Heathershaw said every home game is special, and he's happy that the Eagles start the season in familiar confines. He also admitted getting his team to peak emotionally at the right time is difficult, but he's hopeful that his team will come out composed but excited.

"Playing on this field is always something our guys get excited about, everybody does in the state," he said. "This facility is one of the greatest to play on, especially on the western side of the state in our opinion so we want to contain that energy and have it ready for game time."

Deshaun Watson returns from ban with some support, many boos

Deshaun Watson signed autographs for Texans and Browns fans and posed for selfies before his first game in 700 days in a familiar place. Once the game started, it was overwhelming boos for Watson.

Of the seven stadiums Qatar built for the World Cup, one will disappear after the tournament.

Tiger Woods doesn't 'have much left in this leg' to compete

NASSAU, Bahamas (AP) — Tiger Woods painted an uncertain picture about how much golf he can play, saying Tuesday that “I don't have much left in this leg.”

US beats Iran, advances to round of 16 at World Cup

Christian Pulisic scored and the United States advanced to the knockout round of the World Cup with a 1-0 win over Iran.

DENVER — A contract for a new Colorado football coach — who’s expected to be NFL icon Deion Sanders — is now officially up for discussion by the Board of Regents on Sunday morning. The board announced Saturday that it has scheduled a special meeting for 10 a.m. Sunday to discuss, according to the public agenda, a “Personnel matter at CU-Boulder — athletics.” The announcement confirms that the ...

Mac Engel: TCU loss is on a coach for taking the ball away from a QB who should win the Heisman

ARLINGTON, Texas — TCU head coach Sonny Dykes had the hottest, meanest, fastest, nastiest running quarterback in all of college football, and rather than use him to gain a few inches he had Max Duggan hand the ball off. Twice. As such, No. 3 TCU lost to the No. 10 Kansas State Wildcats, 31-28 in overtime in the Big 12 championship game on Saturday at AT&T Stadium. The result left Duggan in ...

SAN DIEGO (AP) — Moments after Fred McGriff was elected to the Baseball Hall of Fame, almost two decades after his final game, he got the question.

Thunder confident in youth to step up as new season nears

“We hope that people will just say, ‘next guy up’,” head coach Richard Novak said.

These college conference rivals have played against each other for more than 100 years. Can you pair them up?

People can't get over Jude Bellingham’s performance against Senegal

People can't get over Jude Bellingham’s performance against Senegal

New Underwood linebacker Owen Perry makes a tackle during a drill Tuesday at the Tigers' practice.