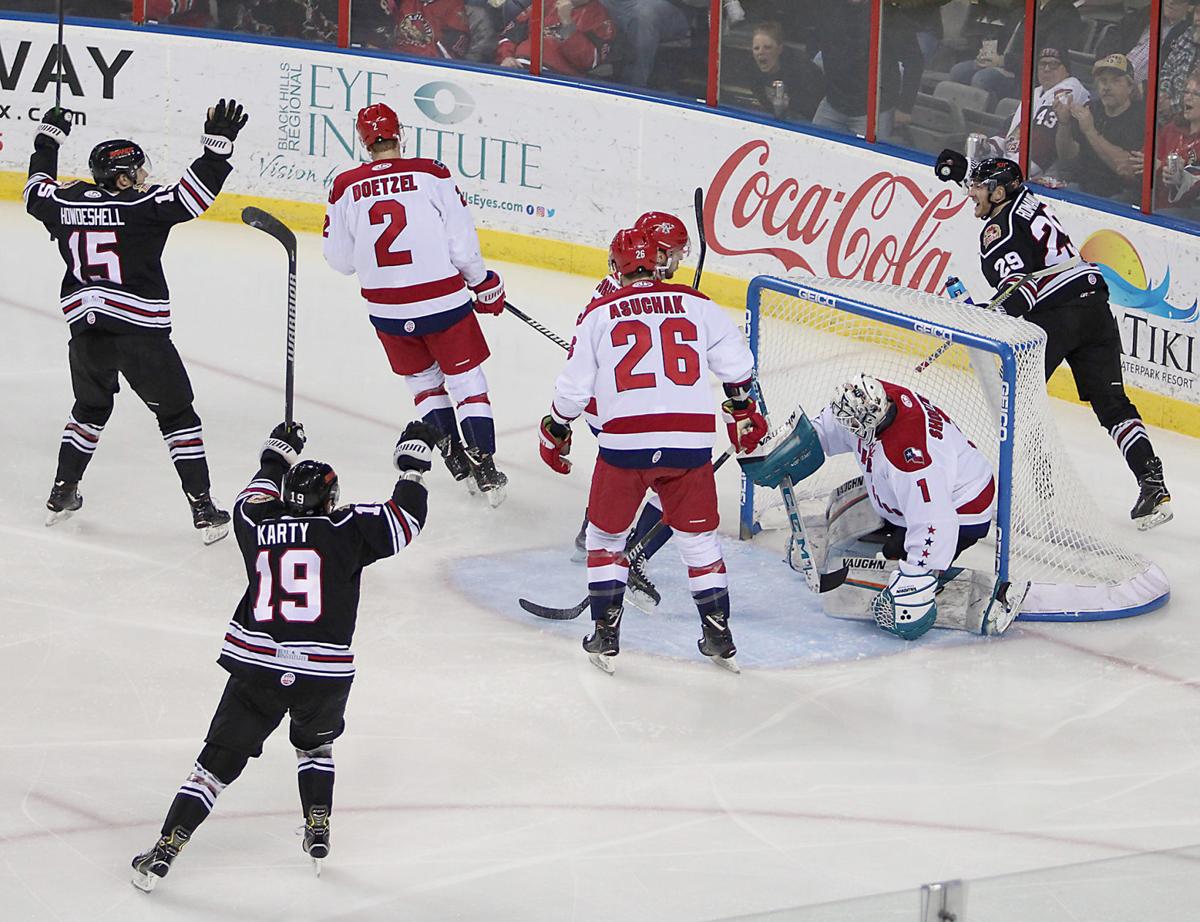 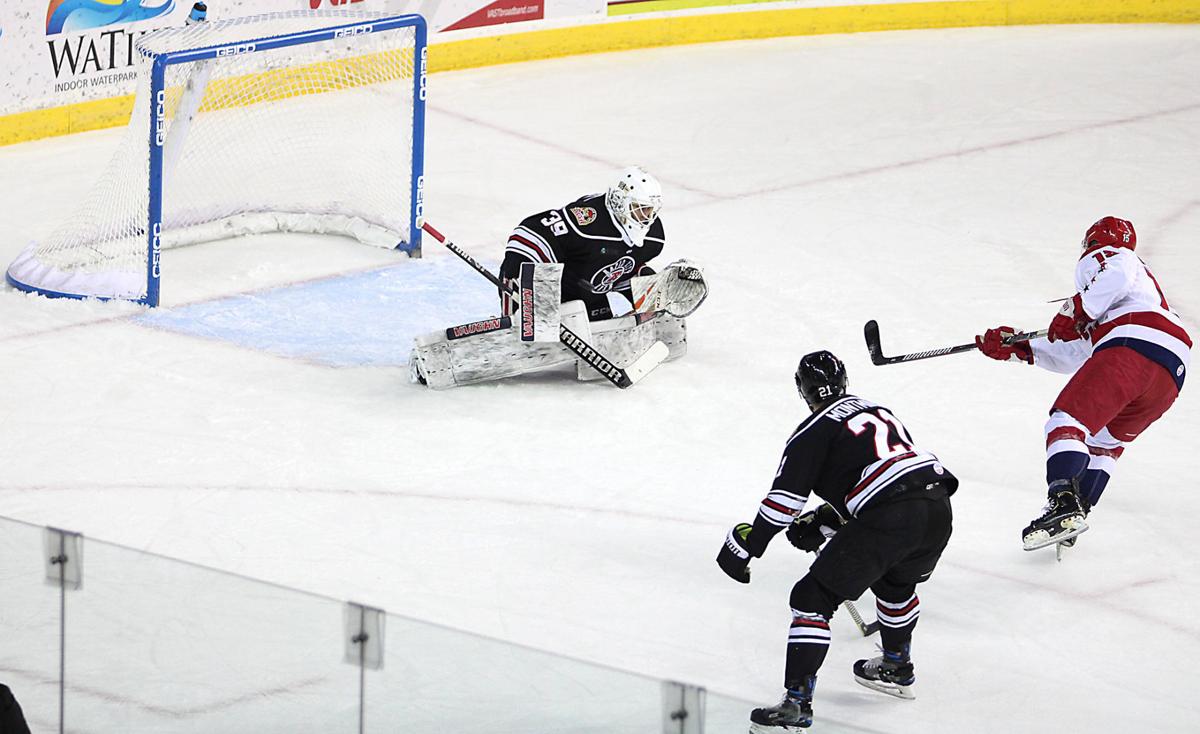 Rapid City Rush goalie Gordon Defiel makes a save during the 3-2 win over Allen Saturday night at the Rushmore Plaza Ice Arena. Allen is leading the division but the Rush won the series with Allen to improve their playoff chances.

Rapid City forward Peter Quenneville fires a shot during the Rush's 3-2 win over Allen Saturday night. Quenneville scored the second goal for the Rush who won the series with division-leading Allen.

Should the Rapid City Rush earn a spot in the ECHL playoffs, the Saturday night 3-2 win over the league leading Allen Americans will stand out as one of the signature efforts toward propelling them into the team’s first playoff appearance since the 2014-15 season.

Trailing early after surrendering two first period power-play goals, the Rush rallied to draw even in the second period and then brought the large crowd on hand to celebrate First Responders Night to its feet when Darian Romanko scored the game winner with 2:20 remaining in the final period.

The game winner, a wrister of a loose puck in the low slot, was Romanko’s second goal of the night and fifth of the season in his 20th game in a Rush uniform. And undoubtedly his two biggest to date, both of which came by crashing the net and poking in loose pucks.

“My first goal was off on an entry. Karty has the puck on the wall and I was driving the middle and he passed it to me and I tipped it and it bounced off the goalie’s pad and I whacked it in,” said a very happy Romanko. “And on the second, I won the face-off and we had a bump play going and we executed well and got down the ice and Paulsen shot it and it was deflected and their guy tried to flip it out and I gloved it down and put it in the net.”

A rash of penalties — along with numerous scuffles including a duke-out by Brennan Saulnier with an Allen opponent three inches taller and 40 pounds heavier — created plenty of power-play opportunities. The Rush tallied their first power-play goal of the series off a Saulnier rush. Taking the puck end-to-end, Saulnier skated behind the net and threw the puck in front to where Peter Quenneville wristed in the tying goal, his team-leading 22nd goal of the season.

The excitement level that peaked following Romanko’s game-winner remained at peak level in the final minutes as a Rush penalty with 1:35 remaining, and a pulled goalie on the other end, forced Rapid City to withstand a six-on-four Allen attack until the clock ticked off the final seconds.

The Rush penalty kill unit, the fifth best in the ECHL, came up big in the final period, redeeming itself for allowing the two first period goals.

Credit goalie Gordon Defiel with playing a critical role in that happening stopping 29 of 31 shots in the game after seeing two of the first nine shots faced settle in the net.

The stellar effort by the Stillwater, Minn., net-minder preserved the Rush’s eighth comeback win of the season.

“It was definitely exciting in the last there. The fans were buzzing and it was a fun atmosphere for sure,” Defiel said of his third win in a Rush uniform since coming over from Indy. “It can be hard to come back when you give up some goals like that early, but the team gave me a lot of opportunity to settle back in. When we were down 2-1 after the first, they didn’t give up much in the second and that helped and we went on from there."

“What a big win that was, and before the loudest crowd all season,” Rush coach Danny Tetrault said. “That was a playoff atmosphere tonight and a gutsy effort by the guys. They came out strong and were focused and a totally different team from last night. I could tell in the locker room, they were focused. And after getting down, it’s easier to rebound when you are behind like we were when you have that focus and energy level right from the get-go.”

Rapid City, (27-20-3-0) and fourth in the Mountain Division) now takes to the road next week for back-to-back, two-game series against 2nd place Utah (Monday and Wednesday) and third-place Idaho (Friday and Saturday) before returning home the following weekend for a crucial three-game series against Tulsa.

MIAMI (AP) — Major League Baseball suspended the Miami Marlins’ season through Sunday, and the Philadelphia Phillies will remain idled by the coronavirus pandemic until Friday, while the rest of baseball forges ahead with trepidation.

Rapid City Rush goalie Gordon Defiel makes a save during the 3-2 win over Allen Saturday night at the Rushmore Plaza Ice Arena. Allen is leading the division but the Rush won the series with Allen to improve their playoff chances.

Rapid City forward Peter Quenneville fires a shot during the Rush's 3-2 win over Allen Saturday night. Quenneville scored the second goal for the Rush who won the series with division-leading Allen.