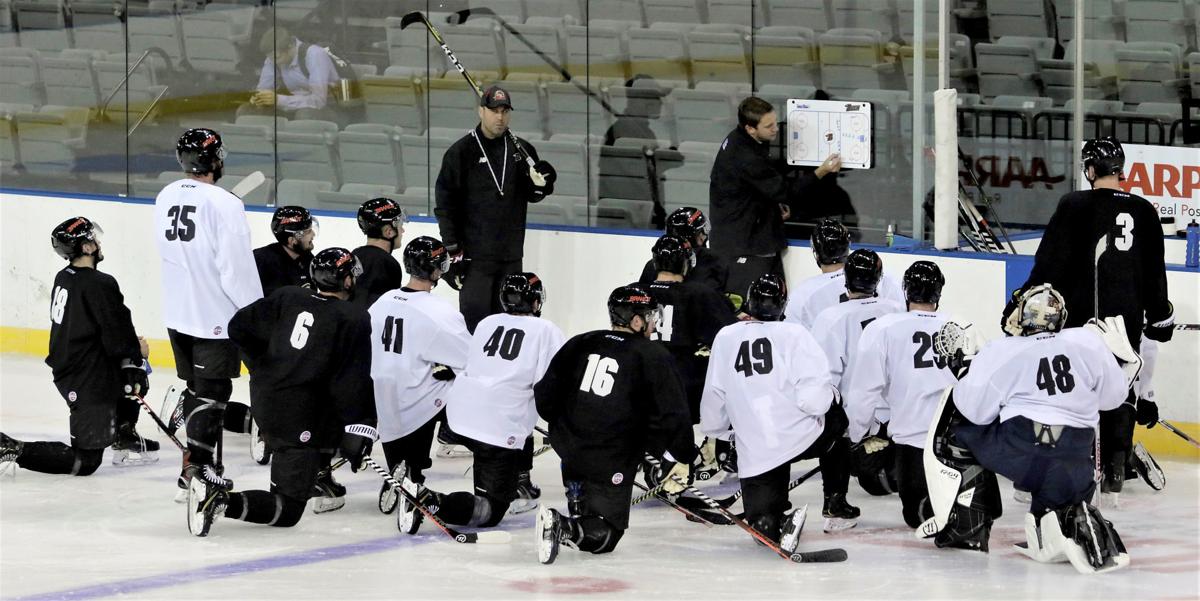 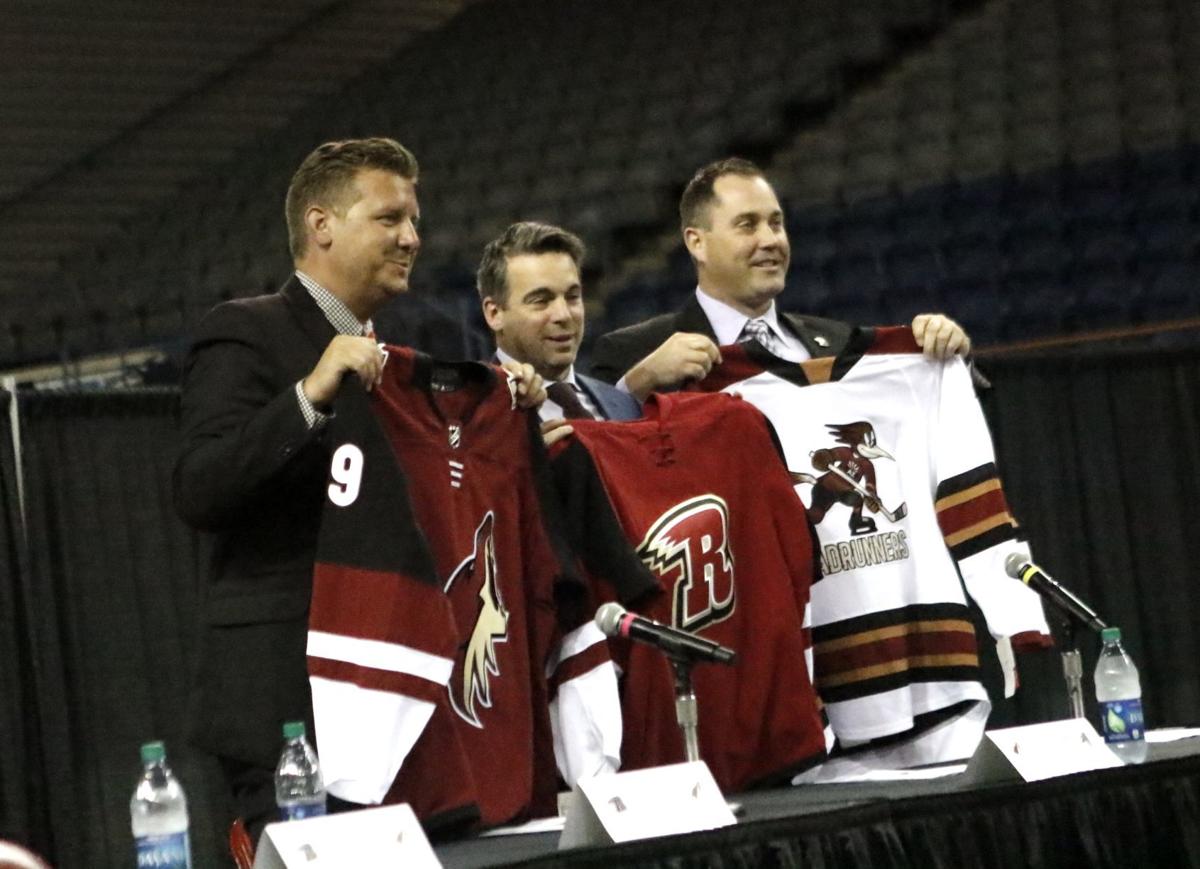 From left to right, Rapid City Rush president Todd Mackin, Tucson Roadrunners general manager Steve Sullivan and Rush head coach Daniel Tetrault hold up uniforms of the Arizona Coyotes, Roadrunners and Rush at a news conference announcing the Rush's affiliation in 2019 with the AHL Roadrunners and the NHL Coyotes.

The Rapid City Rush have agreed to a contract extension with head coach and Director of Hockey Operations Daniel Tetrault, it was announced Tuesday. The extension is for two years with a mutual option for a third year.

“Today is a very exciting day for our organization. I’d like to congratulate Coach Tetrault on earning his well-deserved contract extension,” Rush President Todd Mackin said. “It has been very clear to me since my arrival to the Rush organization that Coach and I share the same goals for leading the Rush to great success both on and off the ice. Paramount to those are winning and bringing a championship-minded culture to our organization. This extension is further proof of our unwavering commitment to achieving these goals. Coach grew tremendously in his role last season and positioned us for what I believed would be an exciting playoff run before the season’s unfortunate end. I look forward to continuing our relationship with Coach Tetrault, and join him in moving forward towards our goal of bringing a Kelly Cup Championship to the Black Hills.”

Tetrault, entering his fourth season at the helm of the Rush, finished the shortened 2019-20 ECHL season with his best record as the organization’s bench boss. Through 60 games, Tetrault led the Rush to a 29-25-5-1 record and 64 standings points. Tetrault led the Rush to a franchise-record nine consecutive home wins to start the season, breaking a nearly decade-old benchmark. Additionally, 19 of the team’s 29 wins came on home ice, the most in a single season since the Rush won 17 in the 2015-16 campaign.

“I’d like to start by thanking our ownership group of Spire Sports + Entertainment, Scott Mueller, our President Todd Mackin, and our entire staff for this opportunity to stay on board with the Rush organization. Words can’t describe how excited I am for this organization and the next seasons to come,” Tetrault said. “Every year since I became the head coach, we’ve improved in the win column and provided the fans with an exciting brand of hockey. We had a mentality of always competing, and always improving every day as a hockey team and as human beings. We’re going to continue that trend and build off of what worked so well.

“This agreement to my extension was a no-brainer for a number of reasons,” Tetrault continued. “In particular, I believe in the ‘New Rush.’ We’re doing things the right way with the right people. We have a vision of how we want to be, and we’re willing to work hard to get there. It’s not just winning on the ice, but being a part of an organization that stands out in the community. Our players have character, our front office works tirelessly to promote our brand, and our interaction with our partners and season ticket holders is first class. I’m also committed to winning here with this team. I know how electric winning a championship feels as a player. I want to bring that same feeling to this organization. Having spent the last six years of my career here, and seeing our loyal fans, there is no group more deserving of a winner than the fans of the Rapid City Rush.”

Tetrault guided the team to significant improvements in its scoring depth during the 2019-20 season, increasing the team’s goals-per-game average by nearly a full goal per game (2.33 gf/g to 3.01 gf/g) over the season prior. Additionally, the team boasted three 20-goal scorers (Peter Quenneville, Tyler Coulter, Brennan Saulnier), tripling the amount from the previous season.

Originally from La Broquerie, Manitoba, Tetrault, 40, began the coaching chapter of his career after 15 seasons as a defenseman in the AHL, ECHL, CHL, IHL, and WPHL. In 921 career games on the blue line, he earned 502 career points. He was named the best at his position as the CHL’s Most Outstanding Defenseman during his stay with the Austin Ice Bats in the 2001-02 season, where he tabulated 43 points in 58 games. In the final year of the CHL’s existence in the 2013-14 season, he joined the Allen Americans and helped them secure their second Ray Miron Presidents’ Cup in franchise history, marking his only professional championship as a player.

Tetrault’s relationship with Rapid City has spanned the last six seasons with the organization. After serving as the team’s captain and retiring from professional hockey in 2015, he transitioned to the broadcast booth for one season in 2015-16. In the 201c6-17 season, he served as the assistant coach, and was named head coach in June of 2017.

“This extension isn’t just about hockey. While I am excited to continue our goal of bringing a Kelly Cup Championship to Rapid City, I am just as excited that I get to pursue that goal in a city that has become so special to me,” Tetrault said. “Rapid City is my home. I met my lovely fiancée, Shelle, here, and we plan on getting married here in September. I’ve always said that Rapid City is a diamond in the rough. This is an outstanding community with some of the best people I’ve ever had the pleasure to get to know. In the recruiting process, the players talk, and when they do, they mention that Rapid City is the place to play. The fans, the support, the passion, and how beautiful this area is make it a favorable destination in our league. I am very proud to continue leading such a special organization. That gives me great pride to know that all of those characteristics make my home so special.”

The longtime former office manager for the Rapid City Rush pleaded guilty Thursday to crimes related to stealing $700,000 from the hockey team.

From left to right, Rapid City Rush president Todd Mackin, Tucson Roadrunners general manager Steve Sullivan and Rush head coach Daniel Tetrault hold up uniforms of the Arizona Coyotes, Roadrunners and Rush at a news conference announcing the Rush's affiliation in 2019 with the AHL Roadrunners and the NHL Coyotes. 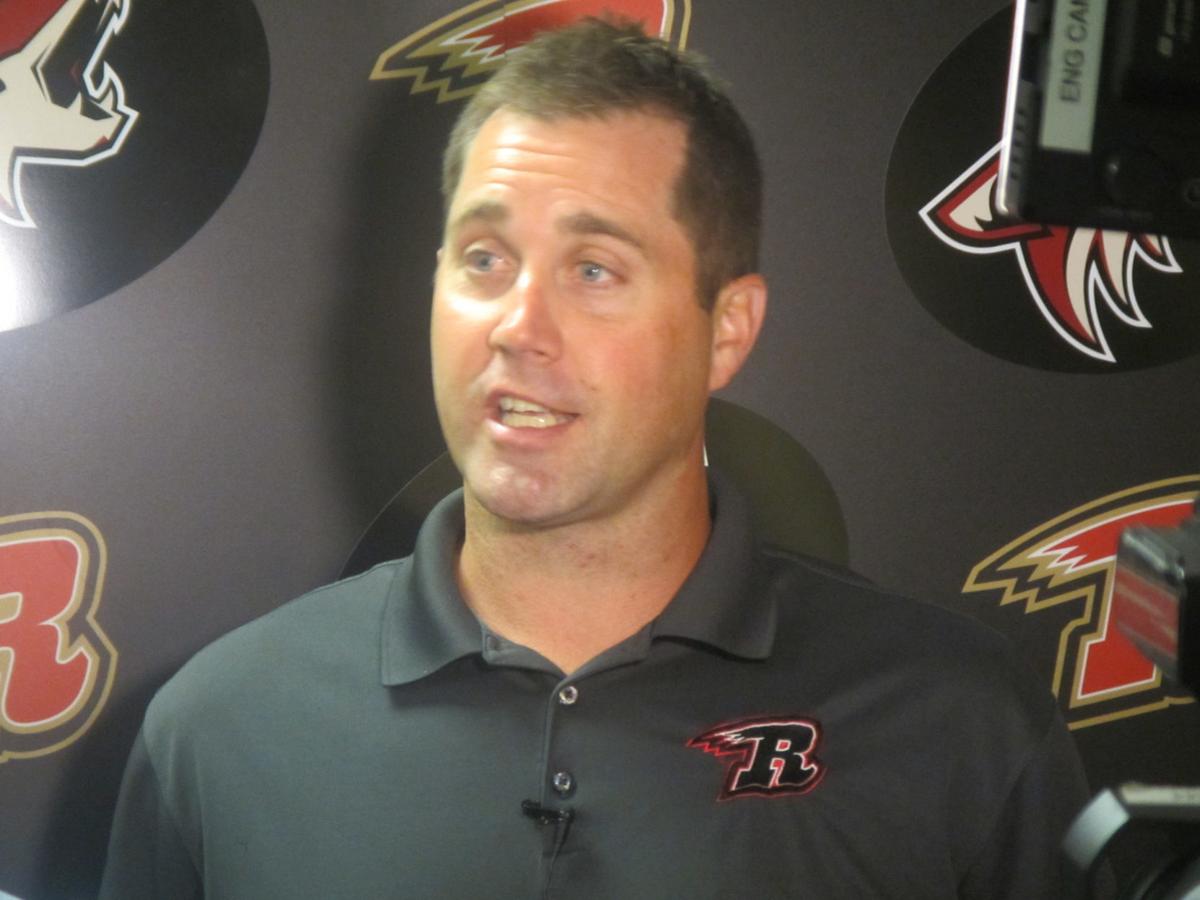