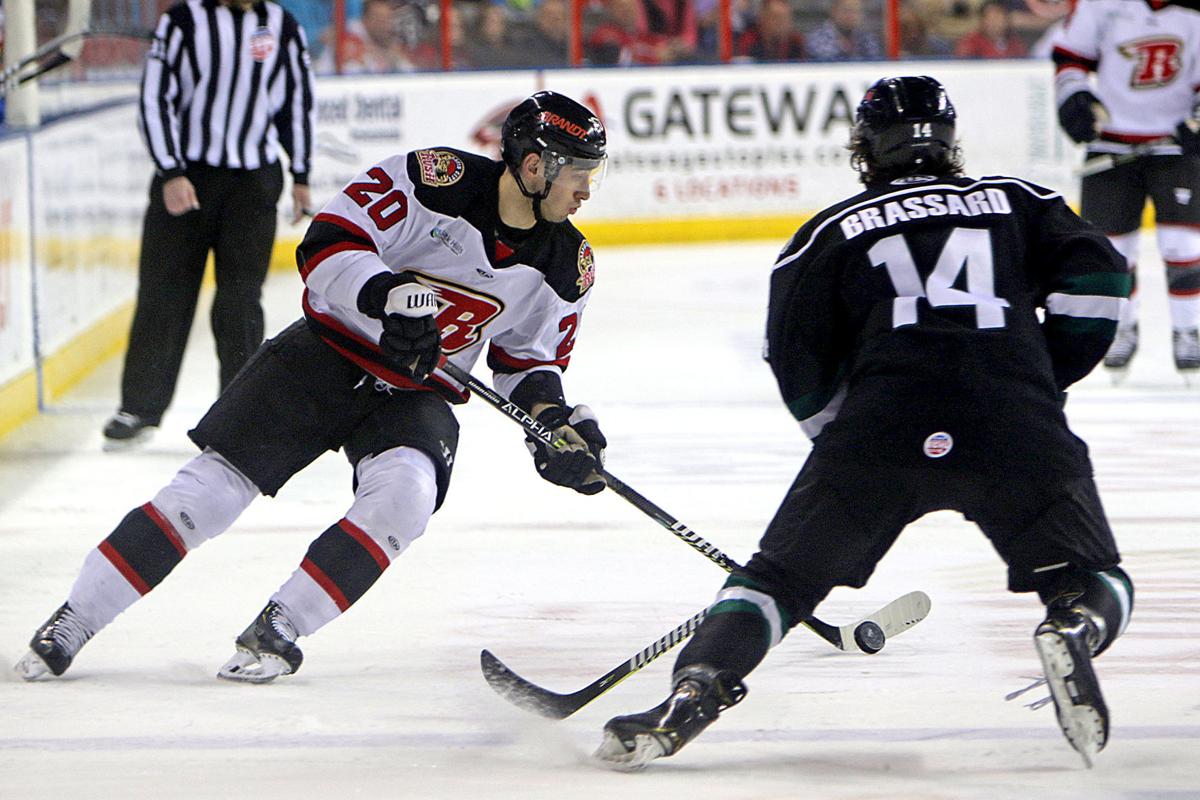 Rapid City Rush leftwinger Brennan Saulnier (20) looks for a teammate breaking up ice after Utah defenseman J.C. Brassard (14) stepped in to stop his rush up the boards during their ECHL hockey game last season at the Rushmore Plaza Civic Center Ice Arena in Rapid City. 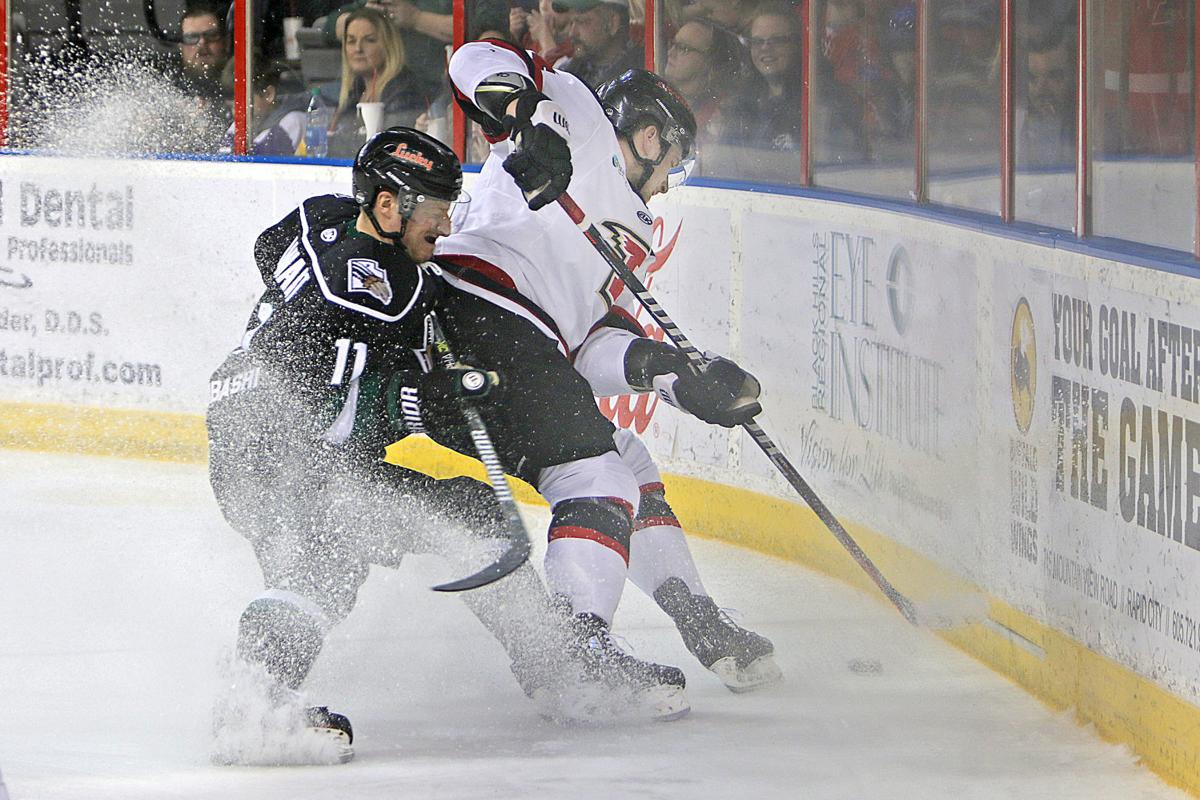 Rapid City Rush forward Tyler Coulter and Utah defenseman Taylor Richart (11) cut hard along the end boards as they chase after the puck during their ECHL hockey game Saturday at the Rushmore Plaza Civic Center Ice Arena in Rapid City. 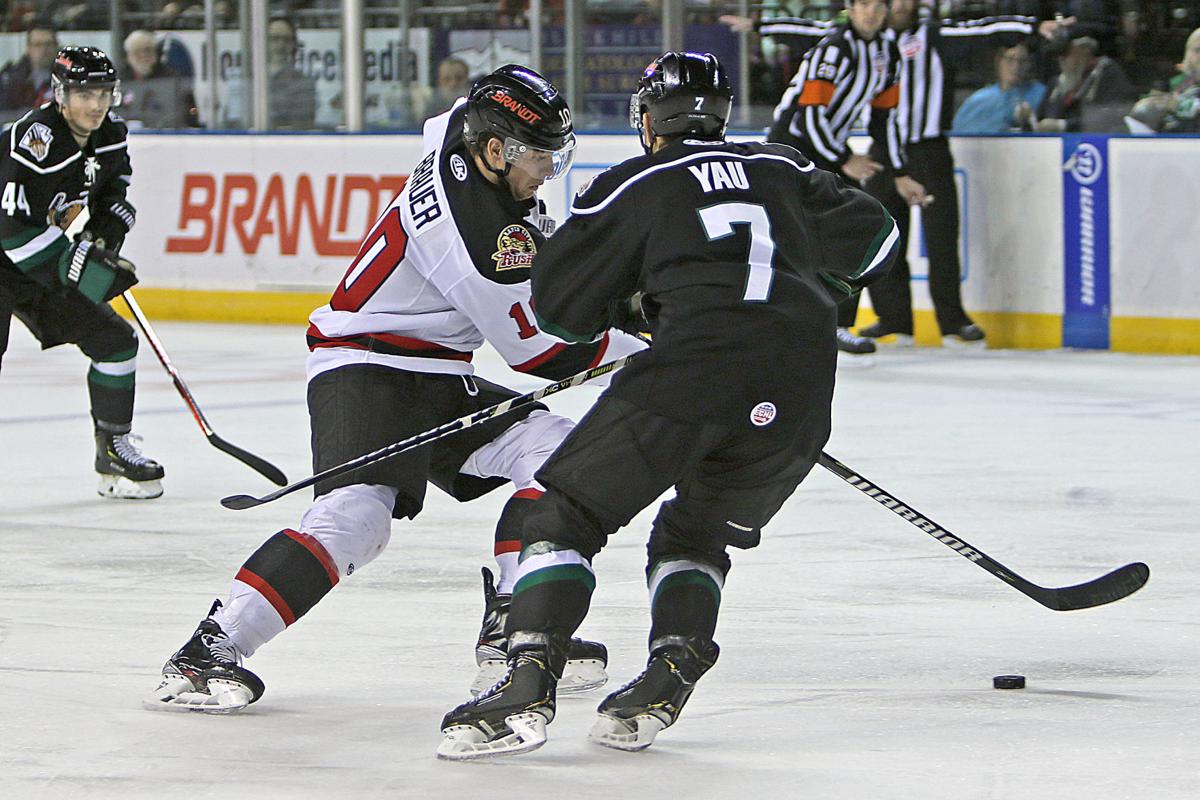 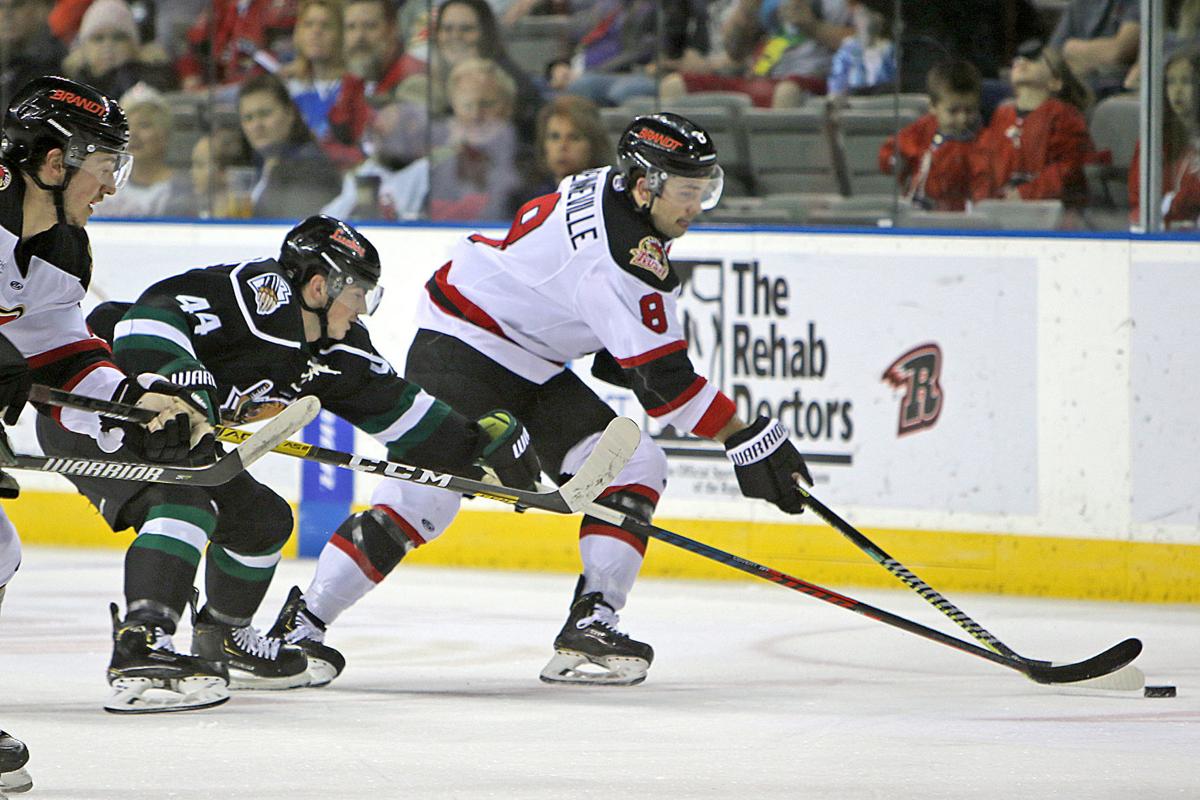 A stirring comeback from three-goal deficit two nights in a row was the task presented the Rapid City Rush on Friday night.

And for a while, the Rush gave the large “Princess Night” crowd ample reason to dream, storming back from a 4-1 deficit to draw even in the third period before faltering late in dropping a 7-4 decision to the Utah Grizzlies at the Rushmore Plaza Civic Center.

For the second night in a row, Utah lit the lamp first converting a delayed penalty opportunity. A Brennan Saulnier penalty call with 12:13 remaining setup a Utah pulled goalie for an extra attacker chance. And when the Rush were unable to clear the zone, a lengthy Utah possession turned into a goal as Travis Barron ripped a slap shot from a sharp angle along the right-wing boards that found net inside the far post.

The Rush drew even on a power-play opportunity with 4:22 remaining. Controlling the puck in the Utah zone with excellent puck movement, Keeghan Howdeshell went to the net and converted a crisp, backdoor crossing pass from Stephane Legault. The goal was the Rush rookie’s 15th of the season, Legault’s 19th assist. Saulnier earned his 23th assist as well.

Utah responded with a late period goal (21.8 seconds remaining) when Mitch Maxwell skated untouched through the slot and wristed in a pass from behind the net by Ty Lewis.

“They scored with about 20 seconds to go in the second period and that was kind of a dagger there,” Rush coach Danny Tetrault said. “But they came out hard tonight and give them credit.”

The 2-1 Utah lead quickly expanded to 4-1 in the second period. Yuri Terao tallied his 18th goal of the season just 1:40 into the period, and Joe Wegwerth added the fourth with at the 5:12 mark of the frame.

For the second night in a row with backs to the wall, the Rush responded with a their own three-goal, game-tying burst.

Matteo Gennaro tapped in a rebound of a Peter Quenneville shot, his fifth goal since joining the Rush, with 11:09 remaining. A Rapid City power play unit that has been on hiatus lately added its second goal of the night to narrow the deficit to a single goal.

Again, a Quenneville shot initiated the tally with Tyler Coulter this time, right place, right time of a rebound off Utah goalie Brad Barone, and then followed up with 15:55 remaining to close out the second period scoring

The large crowd erupted when Coulter added his second of the game on a Rush power play opportunity — Rapid’s third power play goal on five chances — to draw the Rush even at 4-4 with 15:55 remaining in the third period. The goal, Coulter’s 24rd of the season followed a two-goal performance on Friday night, came off a two-goal outing in the 5-4 overtime win on Friday.

Unfortunately for the Rush, the remainder of the period was all Utah as the Grizzlies responded with three unanswered goal to settle the issue. Ty Lewis scored twice, 24th and 25th, and Christian Horn closed out the scoring with his 5th goal of the season.

Gordon Defiel took the loss in net for the Rush (27-of-34 saves) while Brad Barone who started the season on the Rush roster stopped 33-of-37 for the win.

“We got off to a bad start again tonight and then took some undisciplined penalties tonight, but we were resilient and bounced back to tie it up 4-4 in the third and then a give-away on the wall, their fifth goal, was a killer,” Tetrault said. “But you can’t give up seven goals in a game. They got to rebounds, got to loose pucks in the slot and capitalized. We have to take sticks and bodies away and be better defensively. We are scoring goals and the power play looked good tonight, but we have to stay away from undisciplined penalties.”

In the battle for the Mountain Division fourth playoff spot, the loss dropped the Rush (29-25-5-1) two points behind the Tulsa Oilers, who defeated division-leading Allen 4-2 on Saturday night. Fortunately, from a glass half full perspective, the Rush do have three games in hand to make up the deficit.

The Rush host the Idaho Steelheads next weekend in a three-game series with games on Friday and Saturday nights (7:05) and Sunday afternoon (4:05).

Rapid City Rush leftwinger Brennan Saulnier (20) looks for a teammate breaking up ice after Utah defenseman J.C. Brassard (14) stepped in to stop his rush up the boards during their ECHL hockey game last season at the Rushmore Plaza Civic Center Ice Arena in Rapid City.

Rapid City Rush forward Tyler Coulter and Utah defenseman Taylor Richart (11) cut hard along the end boards as they chase after the puck during their ECHL hockey game Saturday at the Rushmore Plaza Civic Center Ice Arena in Rapid City.