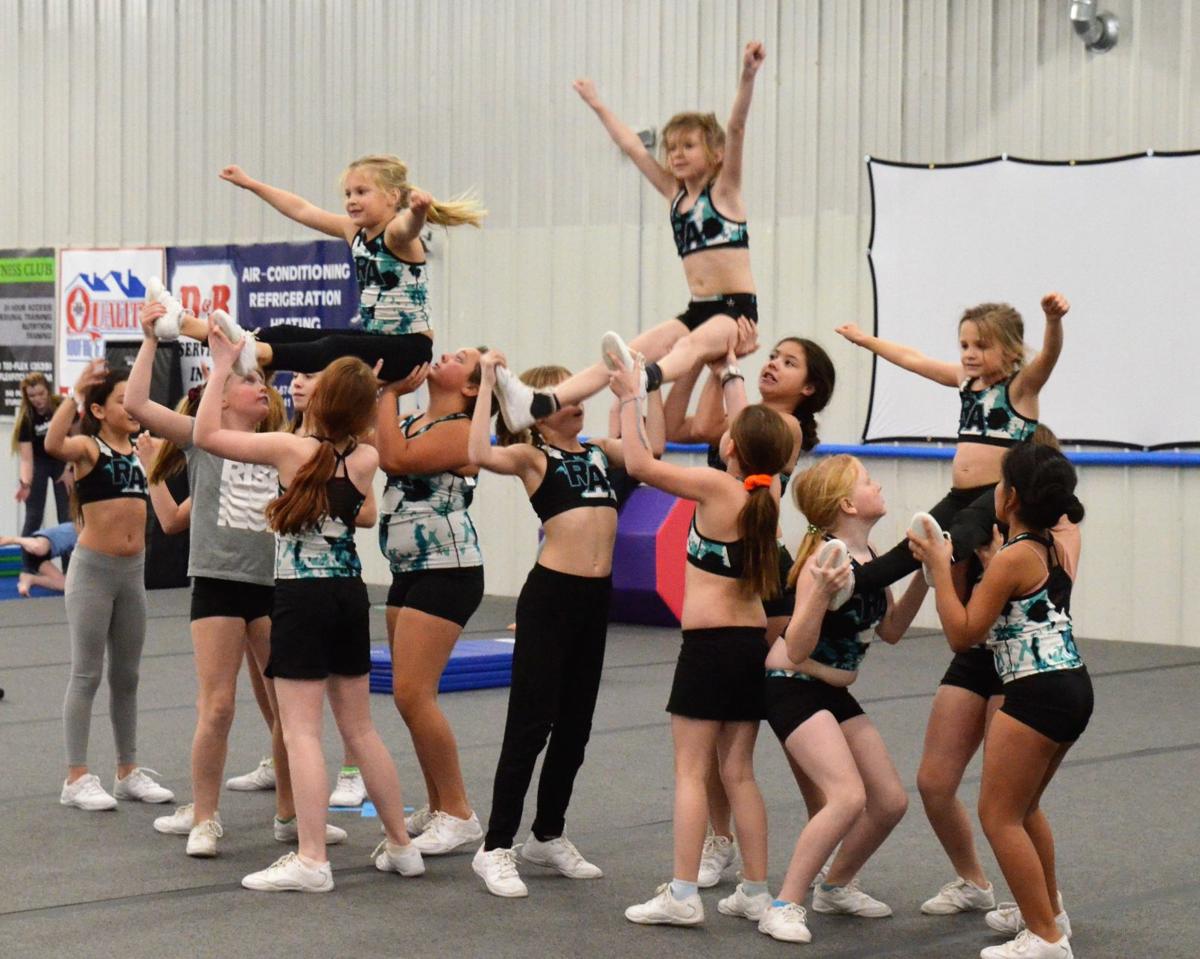 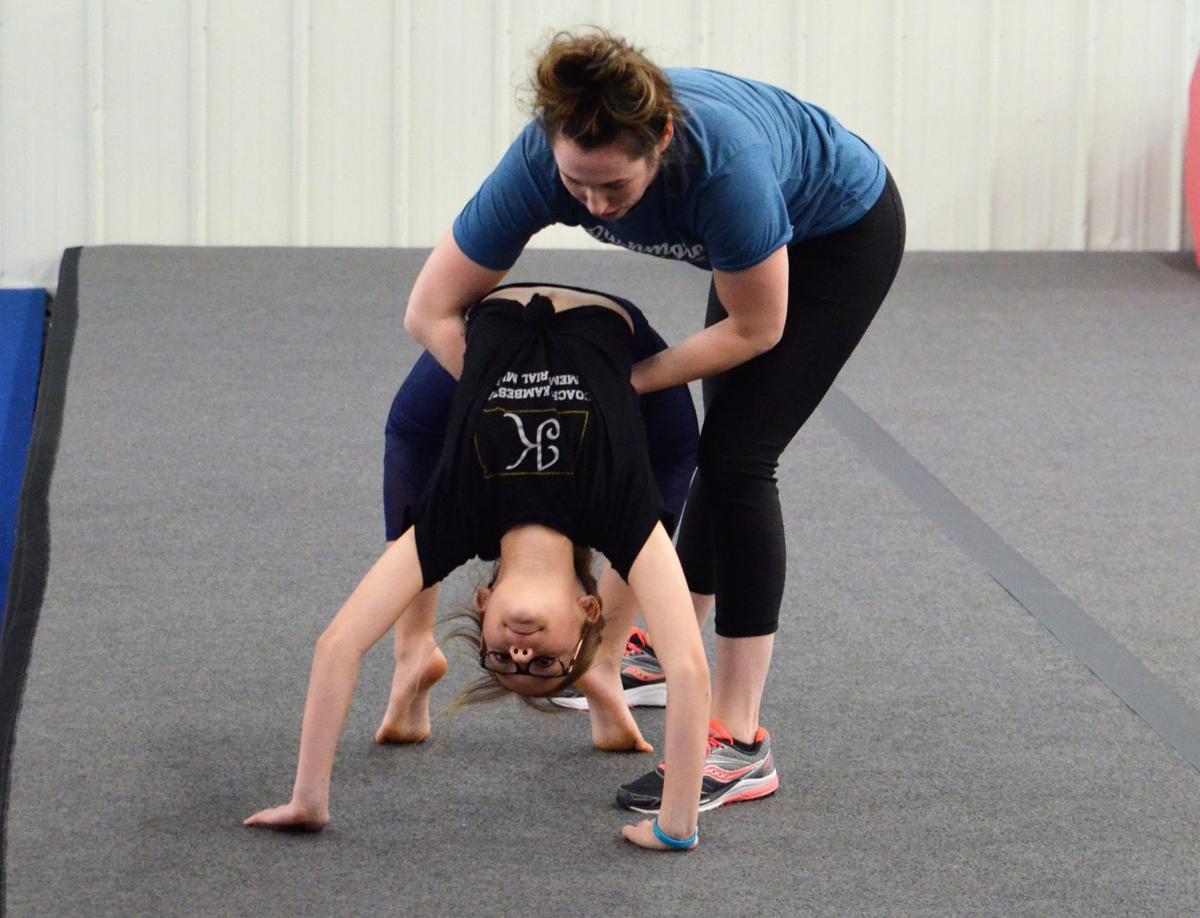 Rushmore Athletics owner and coach Jenna Farrar works with Sadie Morgan this past spring during practice. 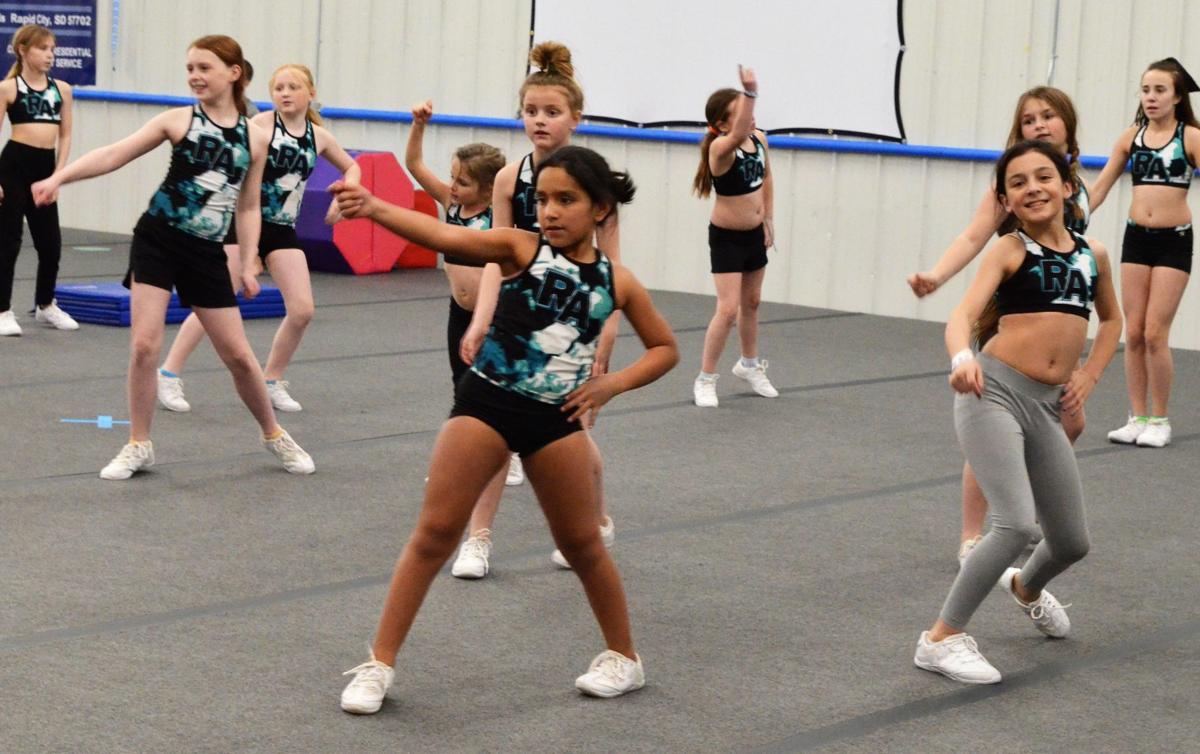 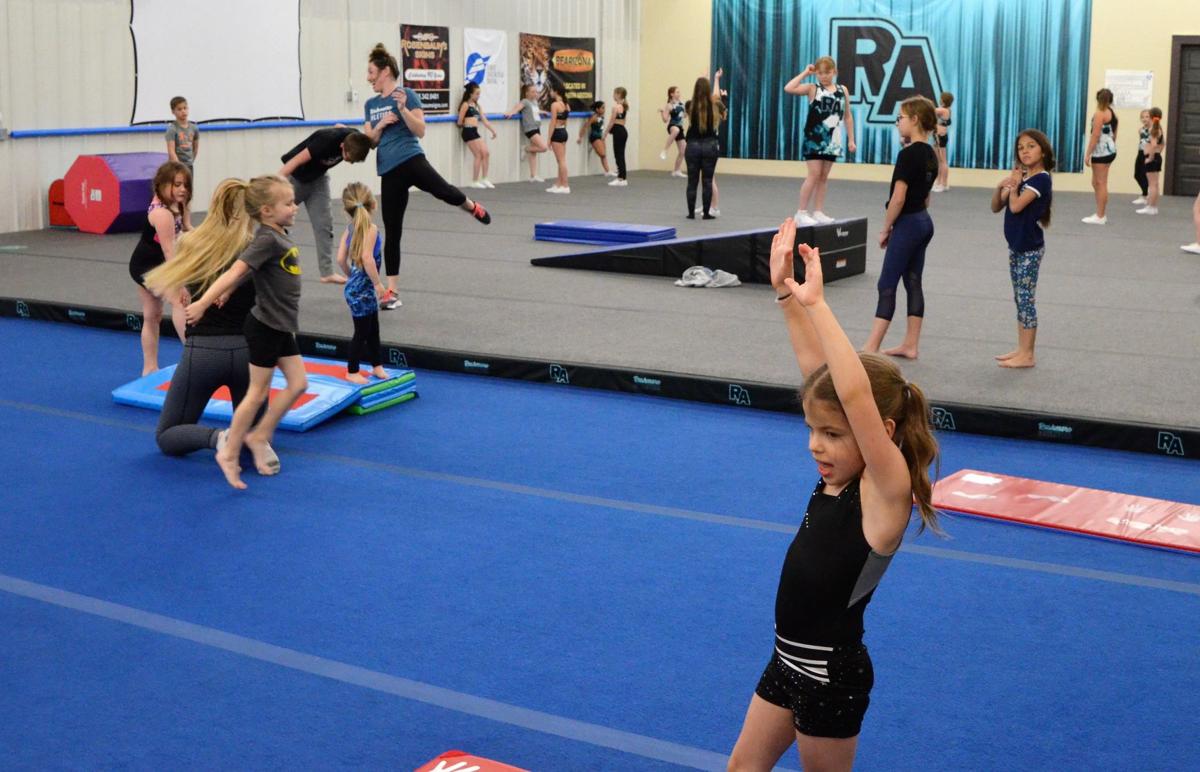 Larque Birdsall works on a routine at a Rushmore Athletics spring practice. 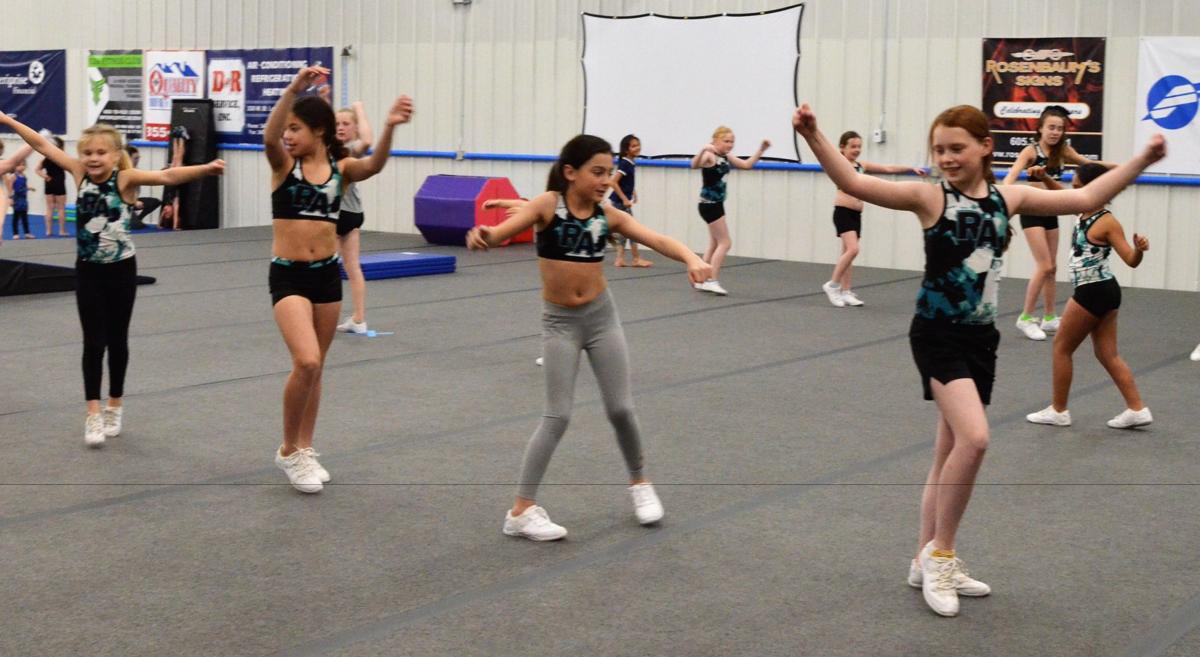 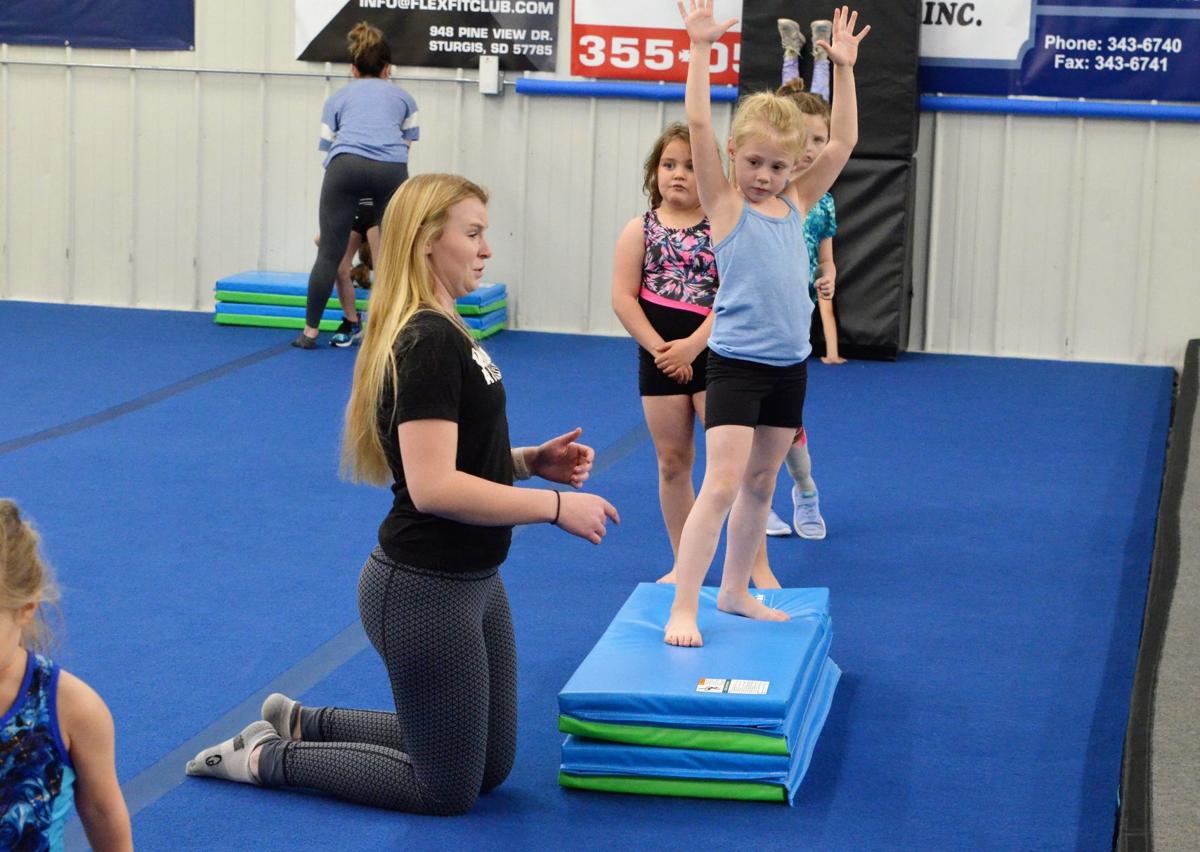 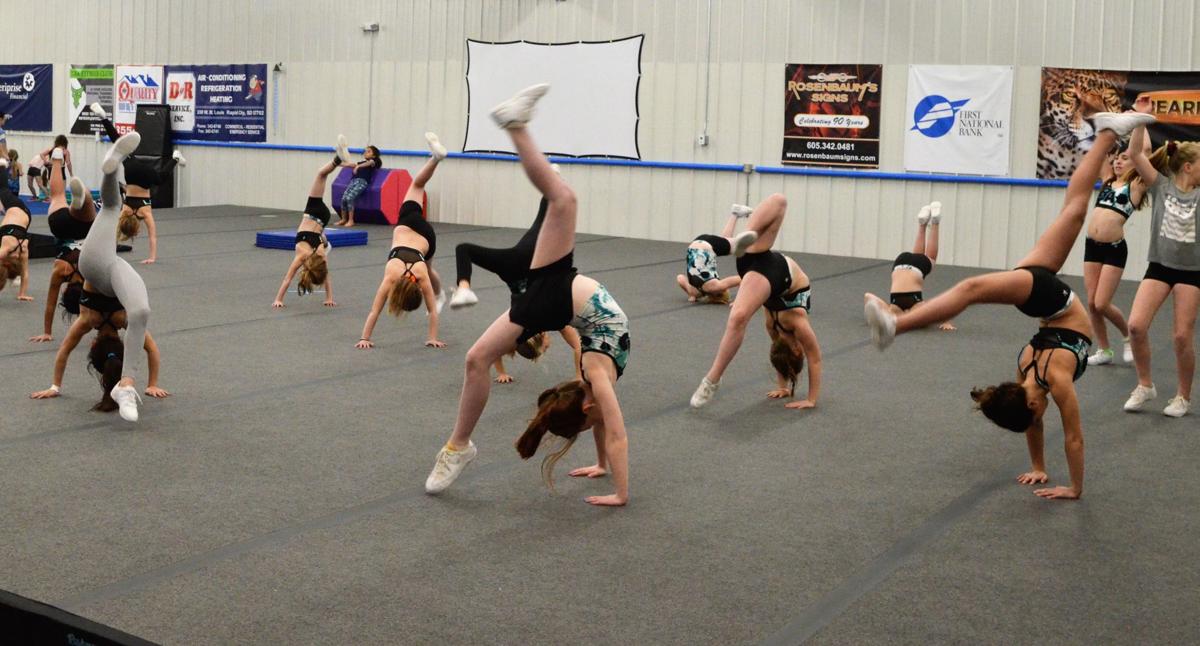 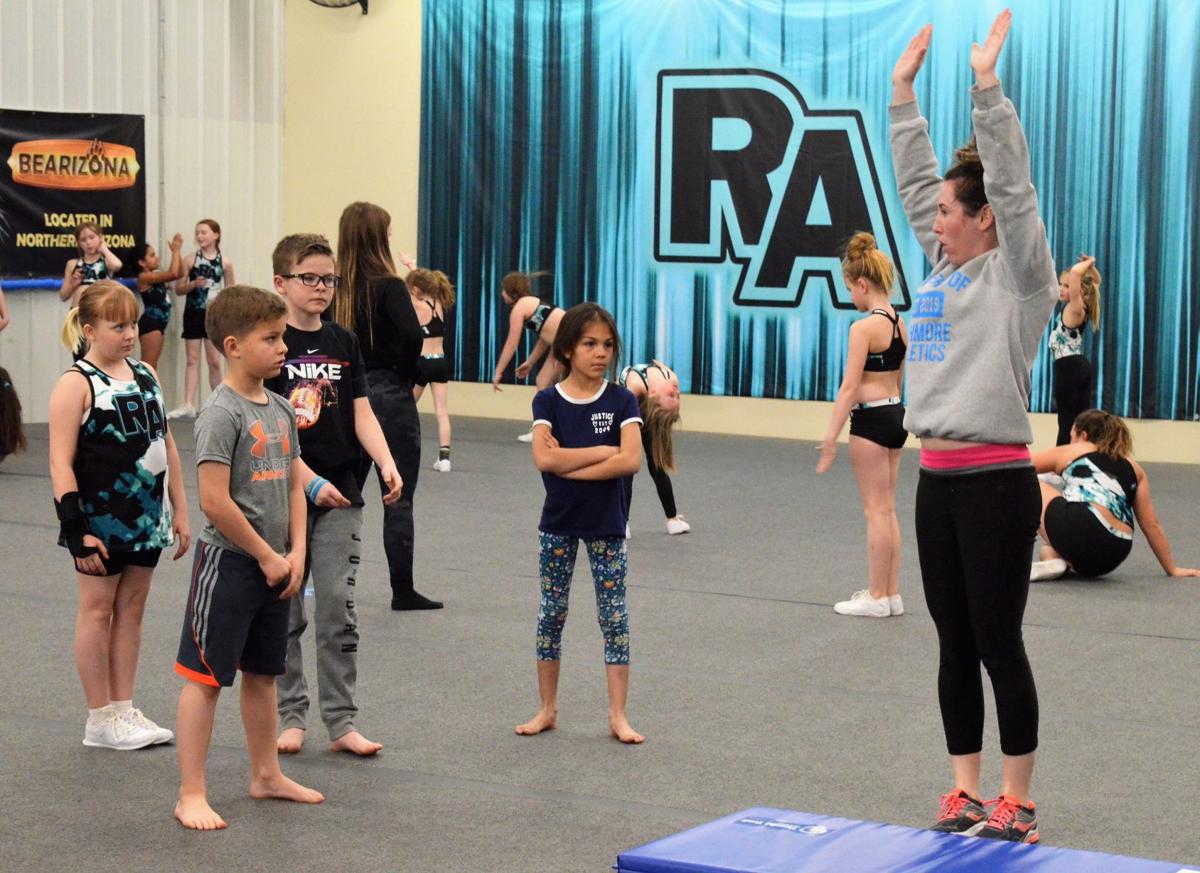 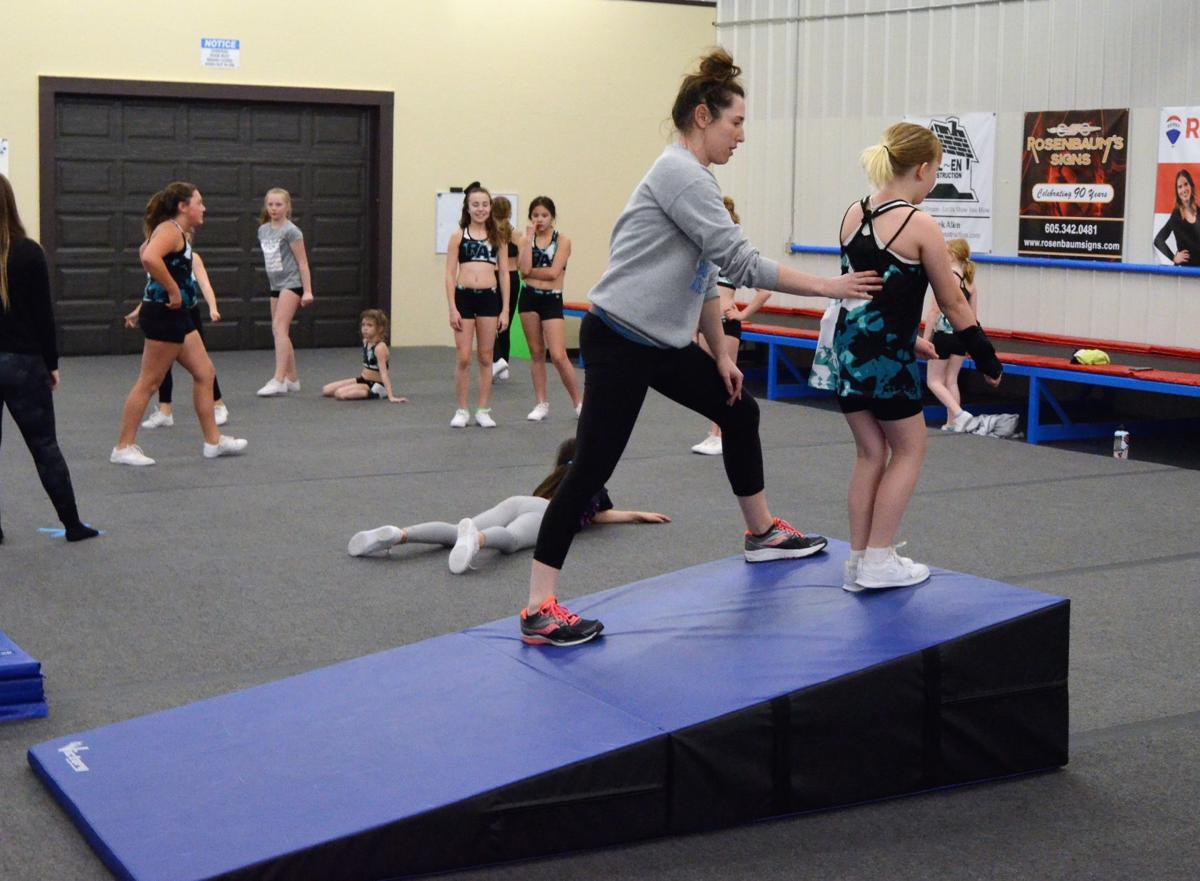 As a talented high school gymnast and a college Division I cheerleader, Jenna Farrar knows what it takes to combine the two.

Seeing that Rapid City lacked a competitive cheer club, Farrar brought them together to form the Rushmore Athletics.

Now set to begin its second year, Farrar, the club's owner, is excited about the growth and future of the sport.

Farrar said their initial year went well, with 16 girls by the end of August on the competitive cheer team, with most of them having no background at all in cheer.

Now she'll work with 56 athletes on the competitive cheer squads and about 170 in the recreational cheer and tumbling program.

"It was a fantastic year and we are just excited to keep growing," she said.

Rushmore Athletics re-opened May 4 with staggered classes because of the COVID-19 pandemic and will start its summer sessions June 1.

The competitive cheer season begins in November and runs through March. They'll compete around the state, as well as in Denver and possibly Omaha, Neb.

The competitive teams compete in All Star Cheerleading, with age groups from 5-18 in levels 1-5.

"The kids can compete in competitive cheer without a whole lot of background of cheerleading or gymnastics because level 1 cheer starts out so basic that any kid could compete," Farrar said.

While gymnastics consists of competing in the vault, floor, beam and bars, competitive cheer focuses on floor, stunt, tumble and jump.

"Tumbling is tumbling whether you are a gymnast or a cheerleader," Farrar said. "We incorporate a routine of about 2 1/2 minutes long and music is playing the whole time. Stunting, jumps and tumbling are going on in the entire routine. Tumbling and stunt difficulty increases with increase of level.

"The stunting part of cheer is pretty fun for kids. People love to watch it, the kids love to do it. We share pretty similar qualities with gymnastics," Farrar said.

She should know as an outstanding gymnast for Rapid City Stevens (as Jenna Schroeder), graduating in 2008, and then as a cheerleader for the University of Wyoming from 2008-2012.

"I was a gymnast my whole life and decided to switch paths when I went to college; I loved cheer," said Farrar, who is also the head competitive cheer coach for Rapid City Central. "It is very clear that we have needed a cheer program in Rapid City for a long time."

The Dakota Spirit, one of four different clubs in Sioux Falls, is in its 25th season. There are also clubs in Chamberlain, Brookings, Huron and Mitchell.

"It is pretty fun to be able to bring that program here to Rapid," she said. "It's exciting to have another option here, and we're excited to look into competitions in Denver and Omaha, anywhere in the surrounding area that has cheer competitions."

Recreational cheer is one hour per week and teaches tumbling, stunting and the jumps that they would use in a competitive routine. The classes are broken down in those sessions. They also work 15 minutes a class on a routine to what is similar to what they would do if they were competitive.

It is basically a pre-competitive division as they try to prepare the young athletes as if they were moving on to competitive cheer, although it isn't required.

"Some kids might do rec cheer forever, and that is fine," she said. "They don't have to move on, but we certainly try to prepare them in case that is is an option."

They also have tumbling classes as we'll, which is 45 minutes of tumbling and no cheering involved. Many of the cheerleaders take an additional class so they can get more of that tumbling time. Farrar said they have more boys in the tumbling program. Boys can be on the same competitive cheer team as the girls, although they have a co-ed division if you have so-many boys.

"We'd love to have more boys in the cheer and competitive classes, so I'm sure that will catch on," she said.

Registration is open for all new summer classes for cheer and tumbling for kids of all ages, and can be done on its website at www.rushmoreathletics.com.

More doubles play together could be in the future for Rapid City Christian senior twin brothers Jack and Noah Roisum, as they both signed lett…

Another win falls into Keselowski's lap

BRISTOL, Tenn. — Brad Keselowski has a new crew and is fighting for a new contract at Team Penske. His confidence is still intact and he's con…

NEW YORK (AP) — If Major League Baseball and its players take the field for a coronanvirus-delayed 2020 season, it will be after acrimonious negotiations that resemble their labor war of a generation ago.

Josie Rush of Philip came away with the Class B girls' title Monday at the Senior Showcase golf tournament at Hillsview Golf Course in Pierre.

MINNEAPOLIS (AP) — The jersey-wearing camaraderie. The scent of sizzling sausages. The buzz before a big game.

Rushmore Athletics owner and coach Jenna Farrar works with Sadie Morgan this past spring during practice.

Larque Birdsall works on a routine at a Rushmore Athletics spring practice.