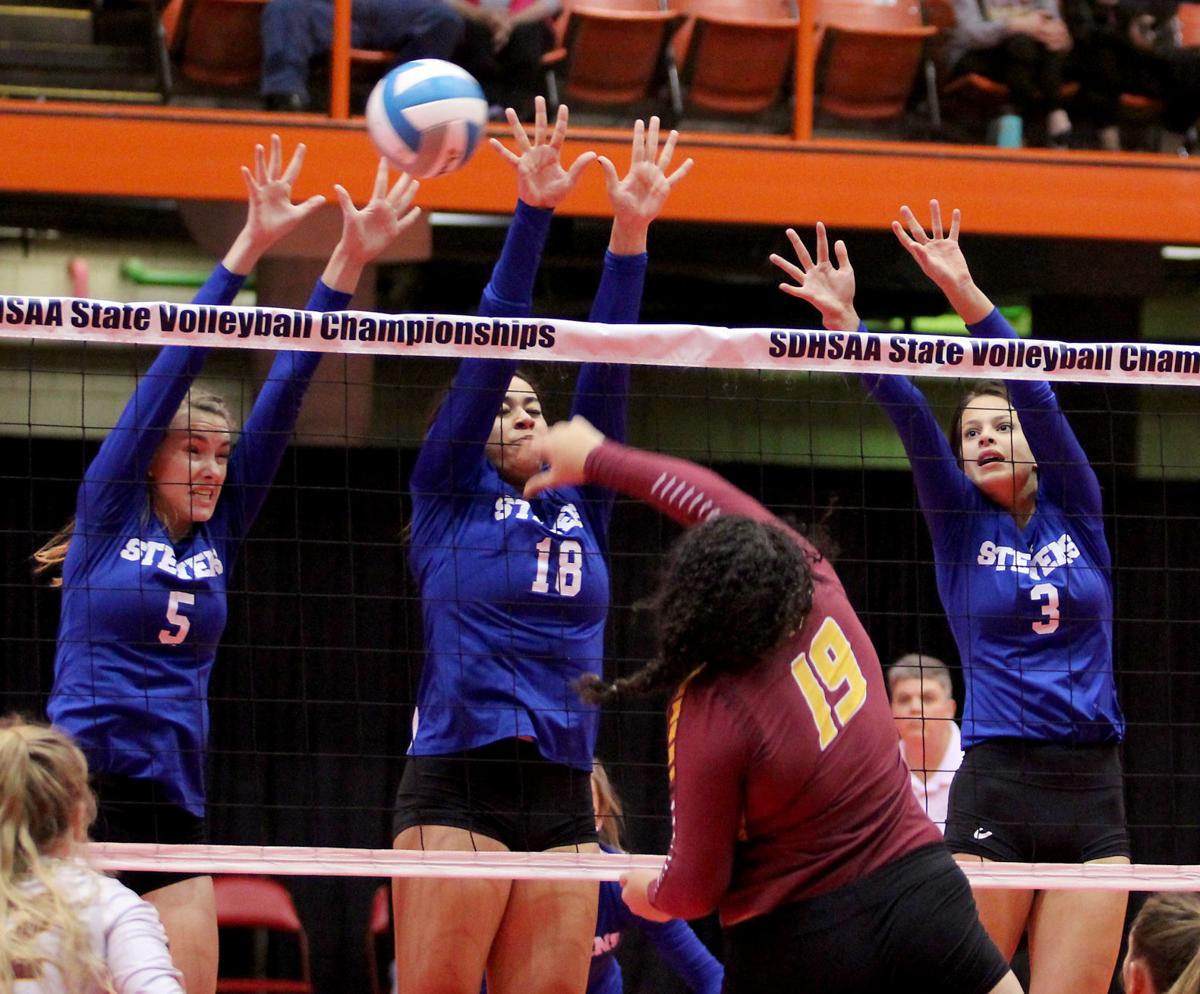 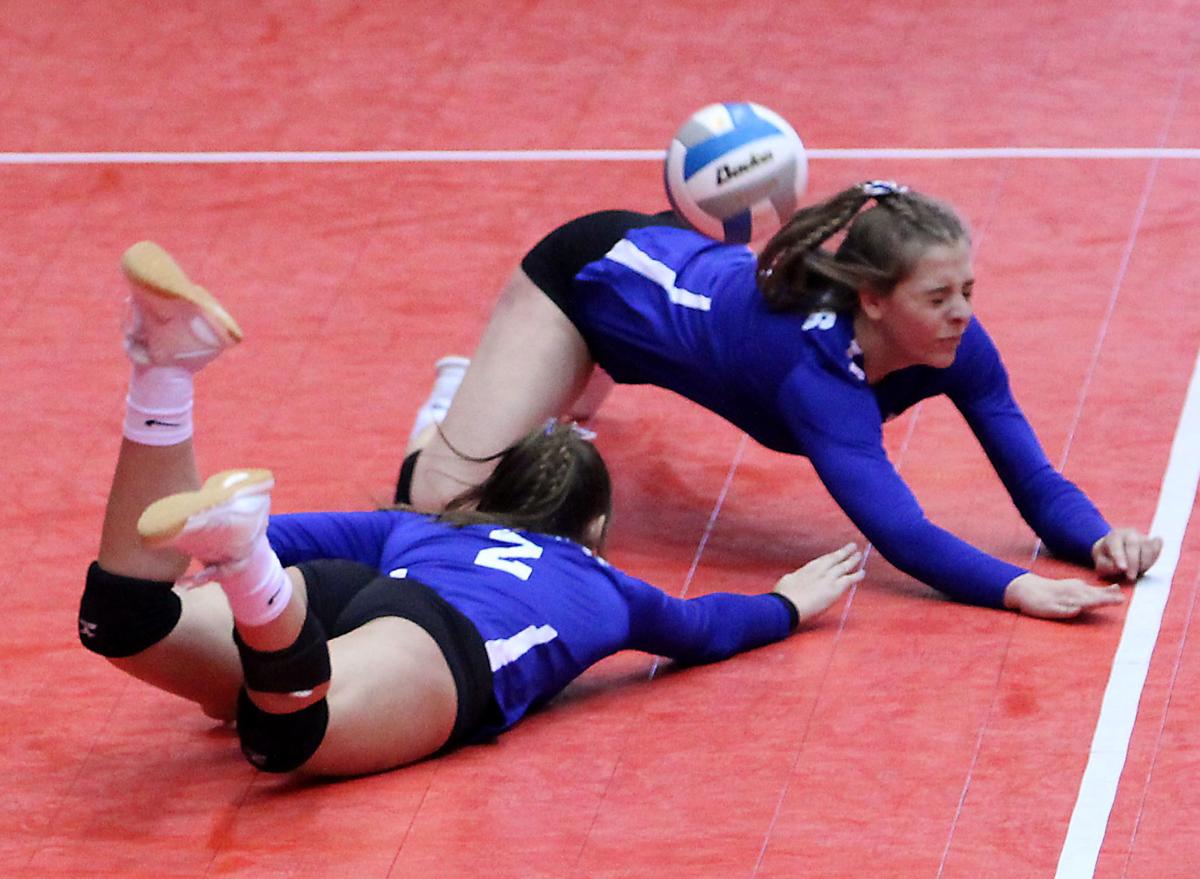 Julia Lee (2) and Bailee Sobczak dive trying to keep a ball in play in the fifth set of Saturday's match with Sioux Falls Roosevelt.

Just a bit short of expectations summed up the final game of the Rapid City Stevens volleyball season as the Raiders (23-12) fell to Sioux Falls Roosevelt, 23-25, 25-23, 25-18, 15-25, 10-15 in the Consolation Championship game of the Class AA State tournament on Saturday morning at the Rushmore Plaza Civic Center.

Coming into the Saturday morning contest off the emotional high of Friday night’s win over Sioux Falls Lincoln in the wake of a disappointing opening round loss may have taken a toll contributing to a first set 20-16 lead to slip away with Roosevelt winning five of the final six points to capture the set 25-23.

“That was unfortunate. We shouldn’t have lost the first set,” Stevens coach Kylie Voorhees said. “We were ahead the entire time and then a few errors put us in a bad position and that eventually caused us to lose the set.”

The Raiders reversed the outcome in the second set falling behind early and trailing by six points at one point, 11-5, before mounting a charge behind a kill and service ace by sophomore Bailey Sobczak.

A couple of Rough Rider attack errors followed as the Raiders closed to within one at 14-13. A Roosevelt spurt expanded the lead to four before another Sobczak spike and a block and point by Sydney Beasley drew the Raiders even at 20-all.

Kills by Beasley and Kyah Watson helped to close out the set and even the match at one set apiece.

The Raiders retained the mojo in the third set easily cruising to a 25-18 win. Junior Jayda McNabb contributed two of her four kills in the match from her middle hitter position in the set along with big hits from Watson (a team high 13 kills in the match), Sobczak (11) and Sammi Sundby (11).

Unfortunately, the Raiders weren’t able to carry that momentum into the fourth set as the offense stalled victimized by attack errors or easily set free balls allowing Roosevelt to breeze to a win.

“They were smart. They knew who they needed to serve for us and that took us out of our game a little bit,” Voorhees said. “And defensively, I didn’t see the defensive team that I saw in games two and three. We didn’t block as well and our defensive pursuit throughout the entire match wasn’t as strong as it was yesterday.”

The decisive fifth set featured a Roosevelt outside hitter barrage from the left side position—six kills including three of her game high 17 kills by Tatum Wilson, two of her 14 in the match by Abby Ward. The Raiders were unable to answer as early 3-1 advantage to quickly dissolve before an attack error setup a dink winner by the Rough Rider’s Jasmine Greer to close out the match.

“We came out strong in games two and three to get us back but we couldn’t hold on to the momentum,” Voorhees said. “We made a lot of errors in games four and five, mental mistakes really, and didn’t have the same mental toughness we had yesterday.”

In addition to Petik, five other seniors completed their volleyball careers in Raider Blue, including Sundby, Haleigh Paz, Beasley, Grace Martin, and Watson.

“It’s been a great bunch of seniors, and it will be sad to lose them,” coach Voorhees added. “They have one runner-up and one state championship to remember. I’m proud of all the girls for what they’ve done and what they accomplished all season long. We came into the tournament seeded seventh and finished sixth. Overall, we had a great season and I’m proud of what we accomplished.”

Julia Lee (2) and Bailee Sobczak dive trying to keep a ball in play in the fifth set of Saturday's match with Sioux Falls Roosevelt.