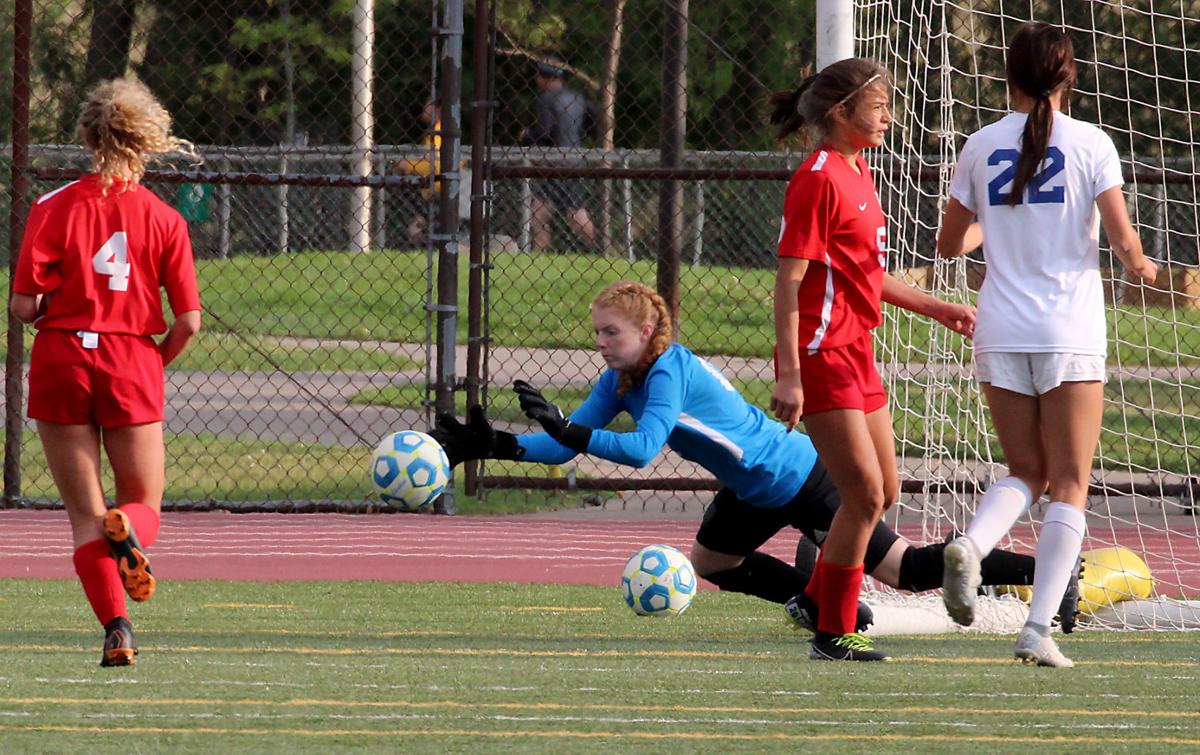 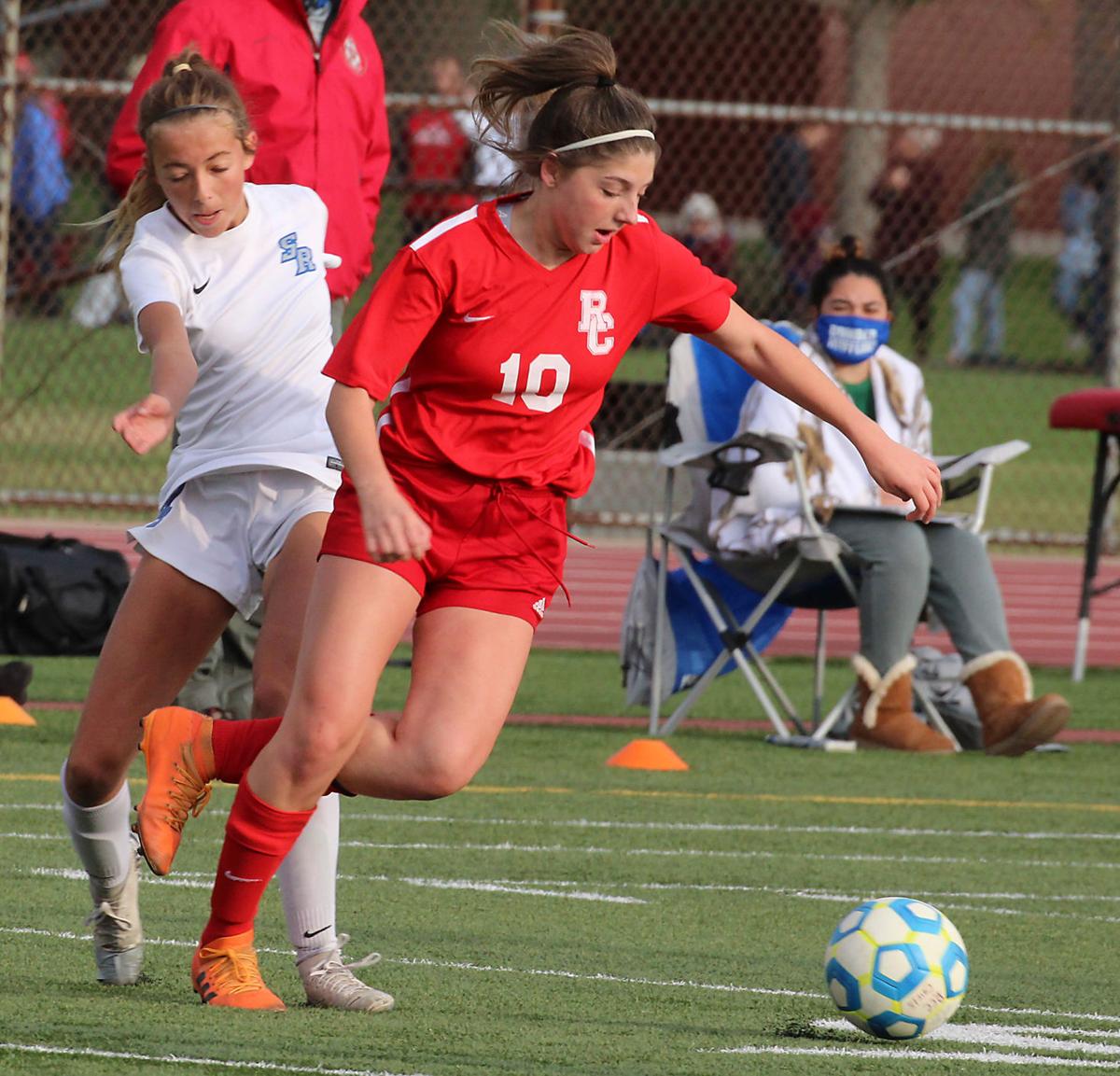 Rapid City Stevens forward Riley Schad trips up Central midfielder Kazlyn Bachelor Tuesday night. Schad started the scoring in the Raiders' 3-0 win with a penalty kick in the first half. 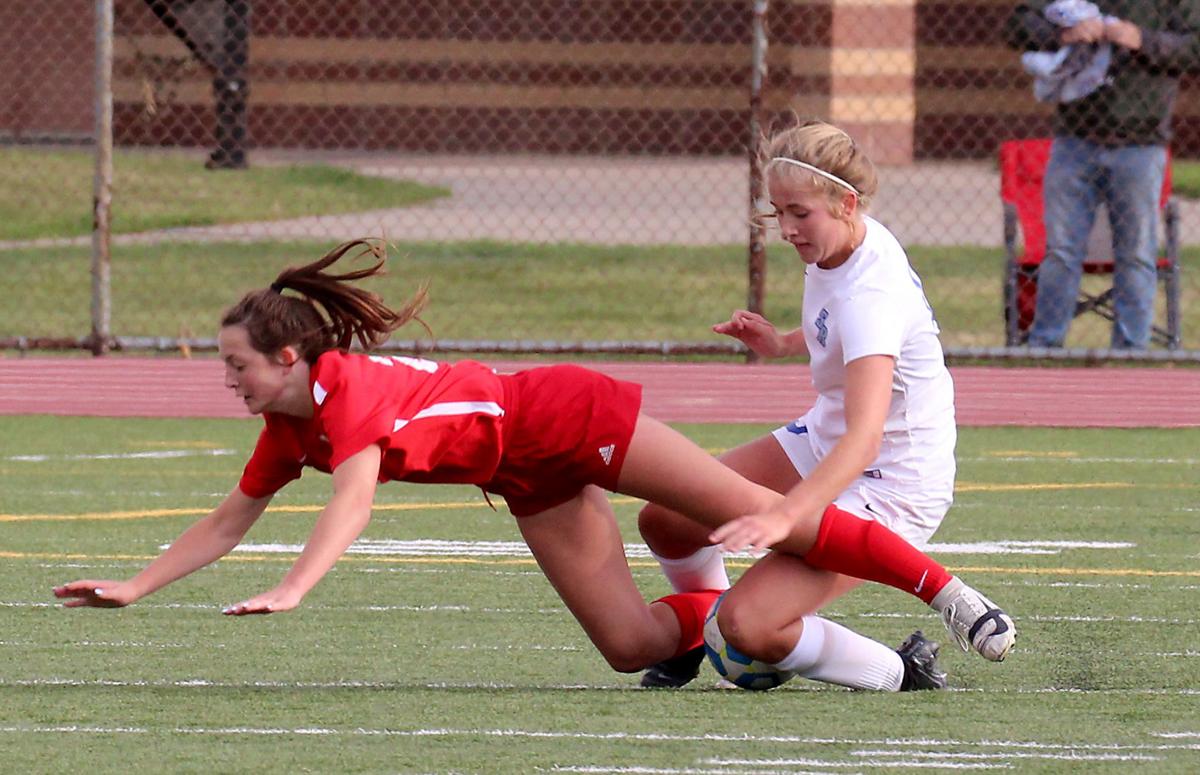 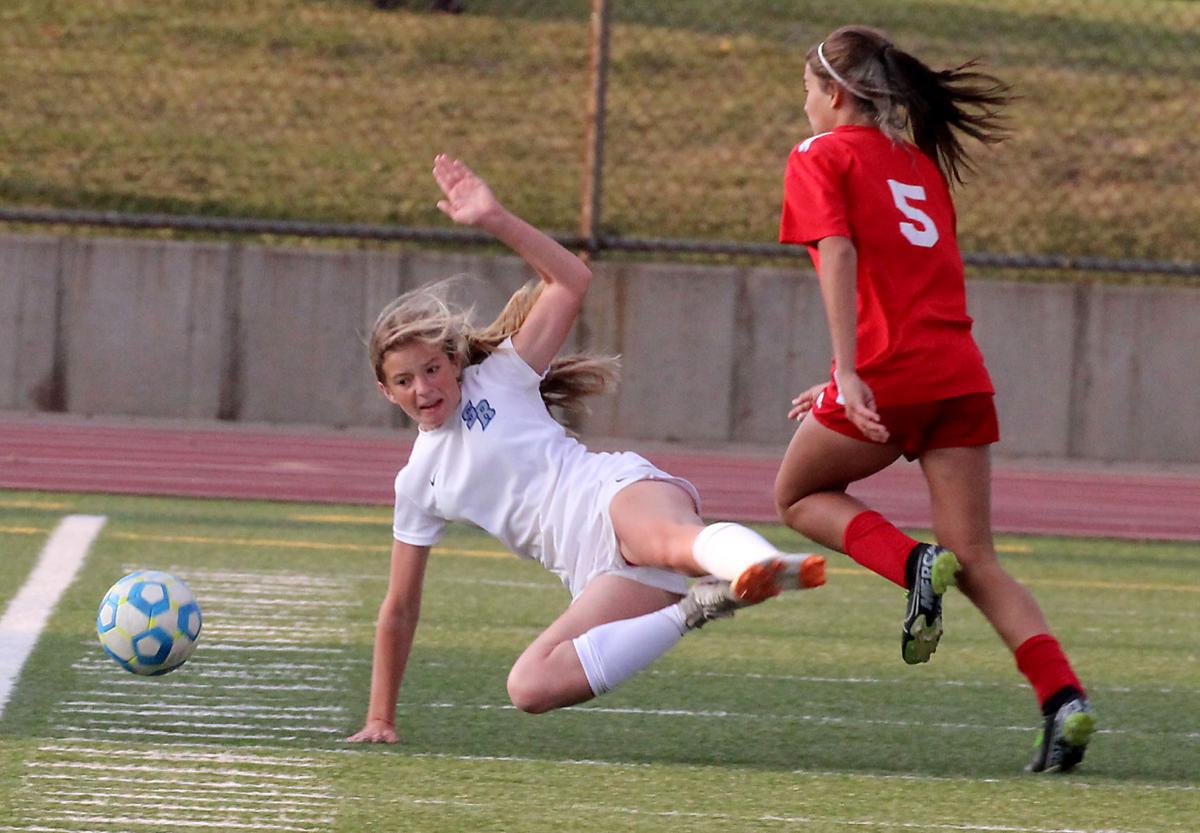 The Rapid City Stevens girls' soccer team avoided a case of the nerves that troubled team in last year's matchups with rival Rapid City Central, and shut out the Cobblers 3-0 Tuesday afternoon at Sioux Park Stadium.

The Raiders also bounced back from the other Central — Aberdeen — which handed them their lone loss of the season last weekend, as they put together a solid game offensively and defensively on Tuesday.

Stevens coach Luis Usera said they had been working on their composure on the field and he said it showed Tuesday. Usera thought the Raiders moved faster and were ready.

"I think the girls were really excited to play, and Central is a really good team and well coached. We just had the calmness today," he said.

Stevens used a penalty kick by junior Riley Schad at the 34-minute mark and took control with a goal by Abbie Noga three minutes into the second half and later on a free kick by junior Shea Ellender.

"I think that first goal really put us ahead mentally. I think Central started breaking down because they started getting frustrated with each other," Schad said. "The second goal just topped it. We just knew at that point that we had it under control and if anything could go the wrong way, we could handle it."

Central coach Mark Morgan said there was no doubt that his team did not find its momentum or rhythm against the Raiders.

"We got out of our game-style and fell into theirs, and unfortunately that is what has happened in the last three games," he said. "We have some work to do to get our heads so we can stay in our own game. They (Stevens) did what they came out to do."

Leading 1-0 at halftime, the Raiders came out early and took control. Schad's corner kick bounced off a Cobbler and Noga took the rebound and got it past keeper Alexus Pruitt for the score.

"After we got that first goal we knew that we could make a mistake and not give the game away, so they played calmer," Usera said. "The big change compared to the last two games is we weren't turning the ball over in dangerous areas, and they were turning the ball over in dangerous areas. This game we finished them by scoring, where they didn't get that opportunity, and that was the difference. That is a very good team and I'm quite surprised at that score."

Stevens closed the scoring on the free kick by Ellender, who got the ball past the Central wall as it hooked into the corner of the goal.

"Getting two set pieces gives you a nice opportunity to get ahead," Morgan said. "When you are playing from behind, you have to do things differently."

Stevens junior midfielder Mara Karn said Central didn't get many opportunities offensively as their defense was solid all game.

"I think that is what we pride ourselves in, our defense," she said. "Our one and three technique really helped shut them down, I think they struggle with that too."

Morgan Jost earned the win at goal for the Raiders. Usera said she did a nice job of patrolling the box and coming out when she needed to.

"When you have a goalie that does that, you're defense plays better because they are not afraid," he said. "They are willing to drop the ball back to her and they'll let them take shots from far out because they know she will be there."

The loss was the first of the season for the Cobblers (5-1-2), who had a pair of 2-2 ties on the road last weekend at Aberdeen Central and Pierre. Despite the struggles as of late, Morgan said they will regroup and get ready for their next time out a week from Thursday against St. Thomas More.

"We have a little game-film to watch, just some of the things that are breaking down," he said. "We have a really good group of girls and they are very talented and they are fast. We just have to get into our game and stop falling into the trap of these teams who want to get away from moving the ball and passing, getting physical and long-ball passing. We'll have to game-plan for that."

The 5-1 Raiders, meanwhile, had a tough 3-1 loss to No.1 ranked Aberdeen Central Saturday in Aberdeen. That loss took its toll, Schad said, but they bounced back.

"We knew that this game was going to be tough," she said. "But in Aberdeen we let that team get to us mentally and we broke down. We came stronger this game."

The Raiders are at Sturgis Saturday.

Rapid City Stevens forward Riley Schad trips up Central midfielder Kazlyn Bachelor Tuesday night. Schad started the scoring in the Raiders' 3-0 win with a penalty kick in the first half.