Perhaps that was a product of the fascination with the out-of-nowhere Shelton: Just 20, and less than a year after winning an NCAA title for the University of Florida, he was traveling outside of the United States for the first time and participating in his second Grand Slam tournament.

So the loud shouts heard most often emanating from the Rod Laver Arena stands on Wednesday, under the sun that carried the temperature to 87 degrees, were for one of the pair: “Let’s go, Benny! Let’s go!” or “Benny, Benny, Benny! Oi, Oi, Oi!” or “Go, Gators!”

“He had a pretty good trip,” Paul noted.

Paul’s story is a pretty good one, too, and it is the one that will keep going at Melbourne Park: The 25-year-old was a star in the juniors and now is making good on that promise in the pros, using a 7-6 (6), 6-3, 5-7, 6-4 victory over Shelton to reach his first Grand Slam semifinal in his 14th appearance at a major.

“Every junior to pro has a different path. ... Mine has been, like, the slowest,” the 35th-ranked Paul said, mentioning a group of Americans he grew up with: Taylor Fritz, Frances Tiafoe, Reilly Opelka. “I like to think the last four years of my career has just been like steady steps moving up. I mean, that’s what it’s felt like. I feel like hopefully 2023 is the year where I really make a big jump.”

As a bonus, Paul’s mother was in the crowd for the biggest victory of his career. He said Mom booked a flight after he won his fourth-round match, then went straight from work to the airport to make the long journey from the U.S.

“She’s done a lot for me, from when I was really young until now. She’s sacrificed a ton to get me here," Paul said. "She deserves to be here and deserves to see me win big matches.”

Paul's next opponent will be 21-time Grand Slam singles champion Novak Djokovic, who overwhelmed No. 5 seed Andrey Rublev 6-1, 6-2, 6-4. After dealing with a worrisome left hamstring in his first two matches, Djokovic has been on quite a roll: He's won his past 11 sets and dropped a total of 27 games in that span as he chases a 10th championship in Melbourne — “something that sends a message,” he said, “to all my opponents remaining in the draw.”

The other men’s semifinal Friday is Stefanos Tsitsipas against Karen Khachanov.

After dropping Rublev's record in major quarterfinals to 0-7 and extending his own winning streak at the Australian Open to 26 matches, equaling Andre Agassi for the longest run there in the Open era, Djokovic looked ahead to facing Paul for the first time.

“I know how he plays. ... He’s been around for a few years. I watched him play quite a bit, especially during this tournament. He’s been playing probably the best tennis of his life,” Djokovic said. “Very explosive, very dynamic player.”

Paul initially broke through as a teenager, taking the 2015 junior title at the French Open (beating Fritz) and getting to the final at Flushing Meadows that year, too (losing to Fritz). Since turning professional, he has claimed one tour-level trophy, at Stockholm in 2021, and, until this week, had made it as far as the fourth round at just one Grand Slam tournament — at Wimbledon a year ago.

Now Paul is the first man from his country to make it to the final four at Melbourne Park since Andy Roddick in 2009. Roddick was also the last man from the U.S. to win a Grand Slam singles championship, at the U.S. Open 20 years ago.

And while Shelton was sort of adopted by the locals — “The crowds have been pretty unbelievable. ... They kind of treated me like one of their own,” he observed — Paul was not drawing the same amount of adoration.

“I’ve been on the outside courts, grinding, until the round of 16,” Paul said. “I’ve been flying under the radar a little bit.”

The women’s semifinals will be Victoria Azarenka vs. Elena Rybakina, and Aryna Sabalenka vs. Magda Linette.

Sabalenka improved to 9-0 in 2023 without dropping a set yet by saving 12 of 14 break points while beating Donna Vekic 6-3, 6-2. Linette never got past the third round in 29 other Grand Slam tournaments — and exited in the first round at 17 of those — but is still around after a 6-3, 7-5 win over two-time major finalist Karolina Pliskova.

Based purely on ranking, Paul offered a much sterner test than anyone Shelton had faced in Australia: His prior opponents were ranked 67th, 96th, 113th and 154th.

This matchup was the first Grand Slam quarterfinal between two American men since 2007, when Roddick beat Mardy Fish in Melbourne.

MELBOURNE, Australia — Fifth-seeded Andrey Rublev advanced to the fourth round of the Australian Open for the third time in four years with a 6-4, 6-2, 6-3 win over Dan Evans on Saturday.

No. 5-seeded Aryna Sabalenka has defeated Belinda Bencic 7-5, 6-2 to reach the quarterfinals of the Australian Open for the first time. No. 4 Caroline Garcia faced Magda Linette later Monday for the final place in the women’s quarterfinals.

Wimbledon champion Elena Rybakina has reached her second final in the past three Grand Slam tournaments by beating Victoria Azarenka at the Australian Open. Rybakina will take on No. 5 Aryna Sabalenka.

Tommy Paul has reached his first Grand Slam semifinal and ended the surprising run of Ben Shelton by winning their all-American matchup 7-6 (6), 6-3, 5-7, 6-4 at the Australian Open. Paul is the first man from the United States to make it to the final four at Melbourne Park since Andy Roddick in 2009. Paul will face 21-time Grand Slam champion Novak Djokovic in the semifinals Friday. Djokovic beat Andrey Rublev 6-1, 6-2, 6-4. Stefanos Tsitsipas and Karen Khachanov meet in the other men’s semifinal Friday. Aryna Sabalenka and Magda Linette advanced to the semifinals with victories. The other women's semifinal is Victoria Azarenka against Elena Rybakina.

Novak Djokovic has put aside some shaky early play to beat unseeded American Tommy Paul 7-5, 6-1, 6-2 and reach the Australian Open final. Djokovic will face Stefanos Tsitsipas for the title on Sunday. The winner will move up to No. 1 in the ATP rankings. Tsitsipas made it to his second Grand Slam final with a 7-6 (2), 6-4, 6-7 (6), 6-3 semifinal victory over Karen Khachanov. The No. 3-seeded Tsitsipas had been 0-3 in semifinals at Melbourne Park. Djokovic is seeking his 10th Australian Open championship to extend his own men's record and a 22nd Grand Slam trophy overall to equal Rafael Nadal's mark.

MELBOURNE, Australia — On the court at Rod Laver Arena on Tuesday night, Victoria Azarenka — the athlete — displayed the same confident brand of take-the-ball-early, hard-hitting tennis that carried her to two Australian Open titles and the No. 1 ranking a decade ago.

Two days after advancing to her first Grand Slam tournament quarterfinal unseeded Magda Linette has gone one better and is into the Australian Open semis. The 30-year-old Linette beat Karolina Pliskova 6-3, 7-5 to add the former No. 1 to the list of top players she has beaten at Melbourne Park during this tournament.

There couldn’t be more contrasting men’s quarterfinals at the Australian Open. Novak Djokovic is still on track for his 10th title at Melbourne Park and now faces No. 5 seed Andrey Rublev — who is 0-6 in Grand Slam quarterfinals. The other men's match Wednesday features a pair of unseeded 20-something Americans: Ben Shelton and Tommy Paul. Neither has ever been this far at a major tournament and their matchup will be the first Slam quarterfinal between two U.S. men since 2007. There is also a fresh face among the women: Magda Linette is playing in her first quarterfinal in 30 Grand Slam appearances. She faces Karolina Pliskova. The other quarterfinalists are appearing for the first time in the last eight at Melbourne Park: No. 5 Aryna Sabalenka and unseeded Donna Vekic.

Andy Murray tries to back up his first-round victory over Matteo Berrettini by winning again and earning a trip to the third round of the Australian Open for the first time since 2017. The 35-year-old Murray is a three-time Grand Slam champion and a five-time runner-up at Melbourne Park. He played Berrettini for more than 4 1/2 hours in the first round. Novak Djokovic is also in action Thursday in the second round as he continues his quest for a record-extending 10th Australian Open title and 22nd Grand Slam trophy overall. The most intriguing women's match on Thursday's schedule pits WTA Finals champion and No. 4 seed Caroline Garcia against 2021 U.S. Open finalist Leylah Fernandez.

IOC to allow Russian athletes to compete In 2024 Olympics

This Day in History: First Winter Olympics take place in the French Alps

This Day in History: First Winter Olympics take place in the French Alps 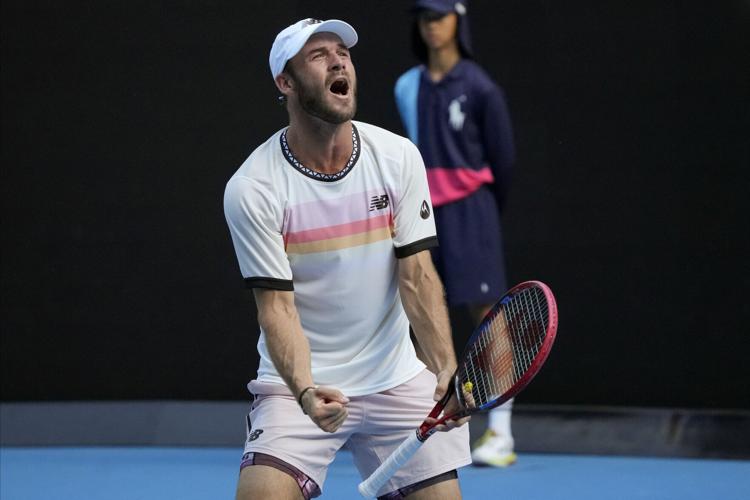 Tommy Paul celebrates after defeating Ben Shelton in their quarterfinal match at the Australian Open on Wednesday. 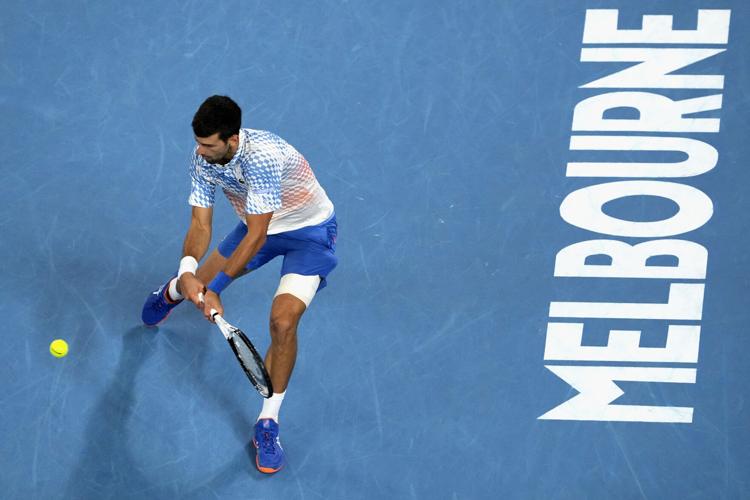 Novak Djokovic plays a backhand return to Andrey Rublev during their quarterfinal match at the Australian Open on Wednesday. 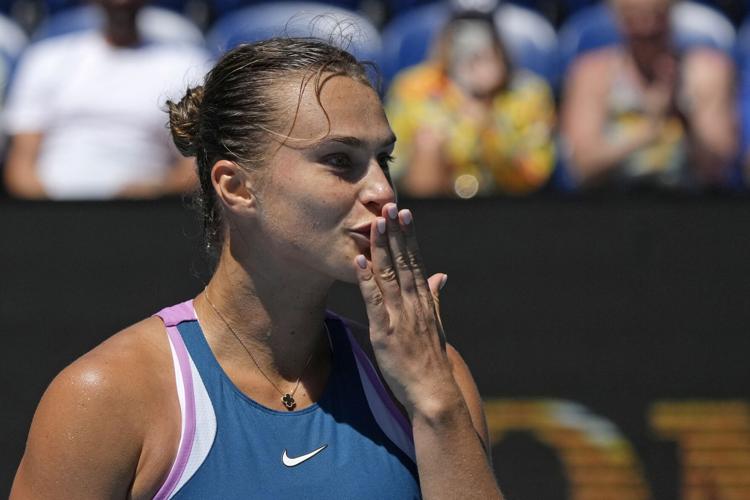 Aryna Sabalenka reacts after defeating Donna Vekic in their quarterfinal match at the Australian Open on Wednesday.