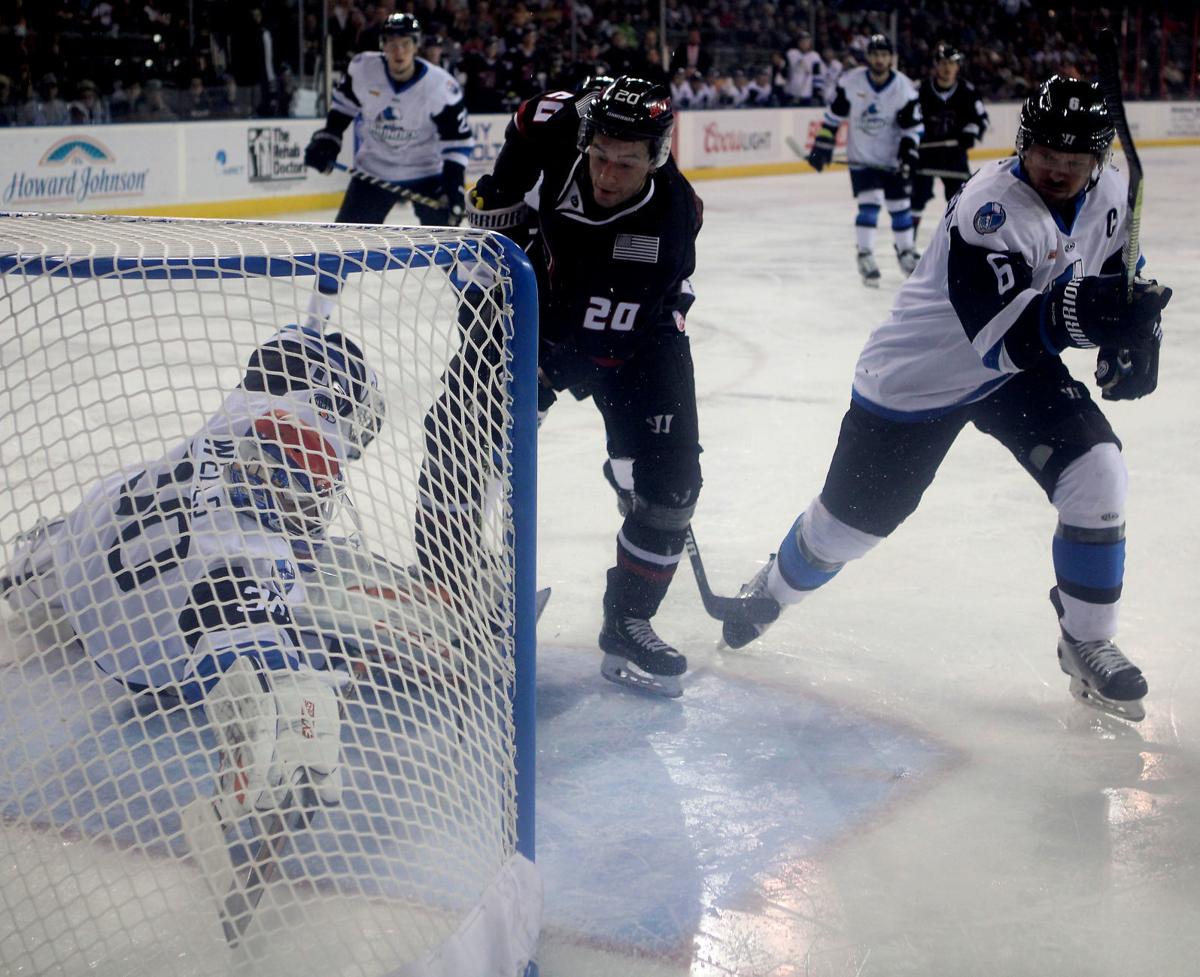 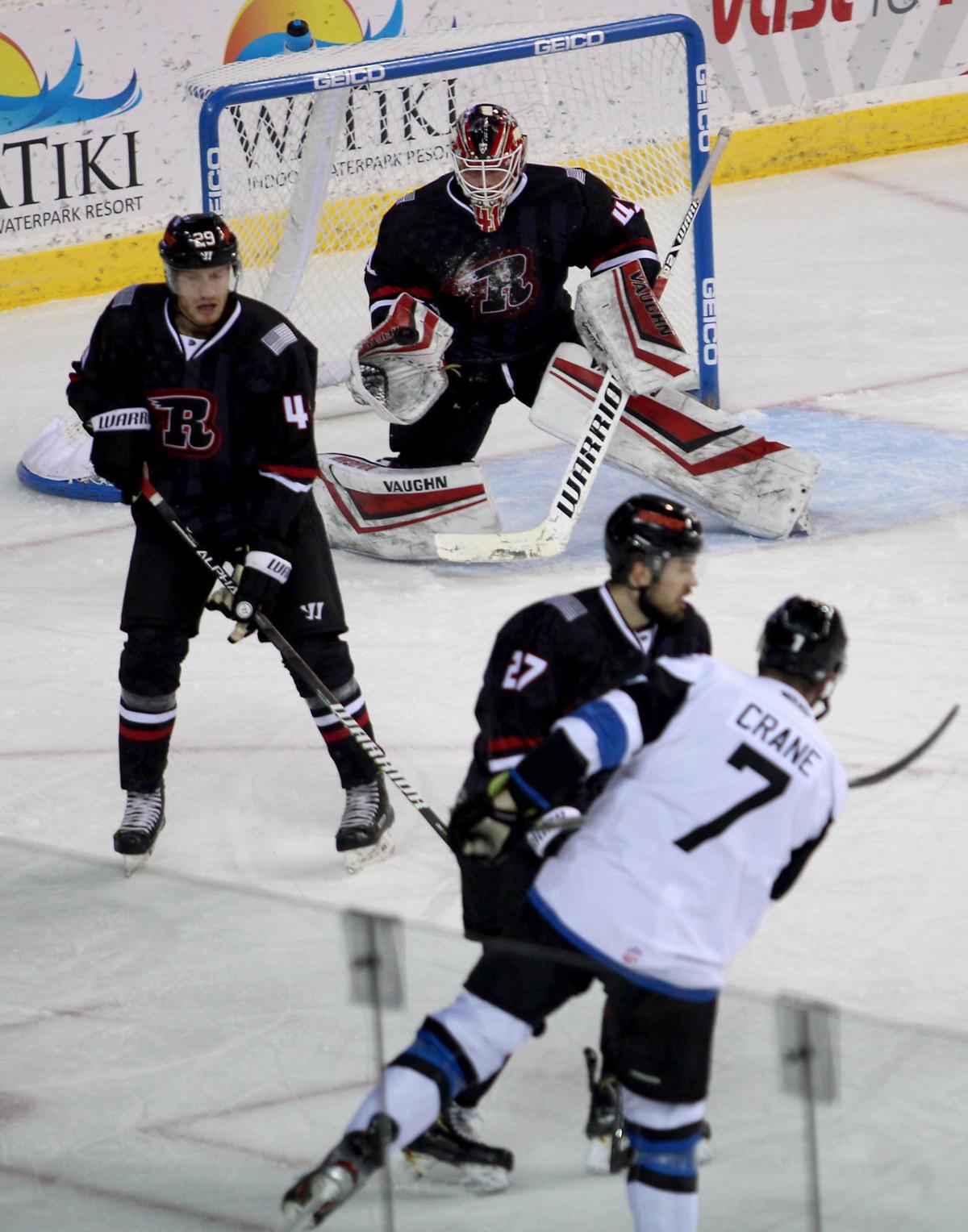 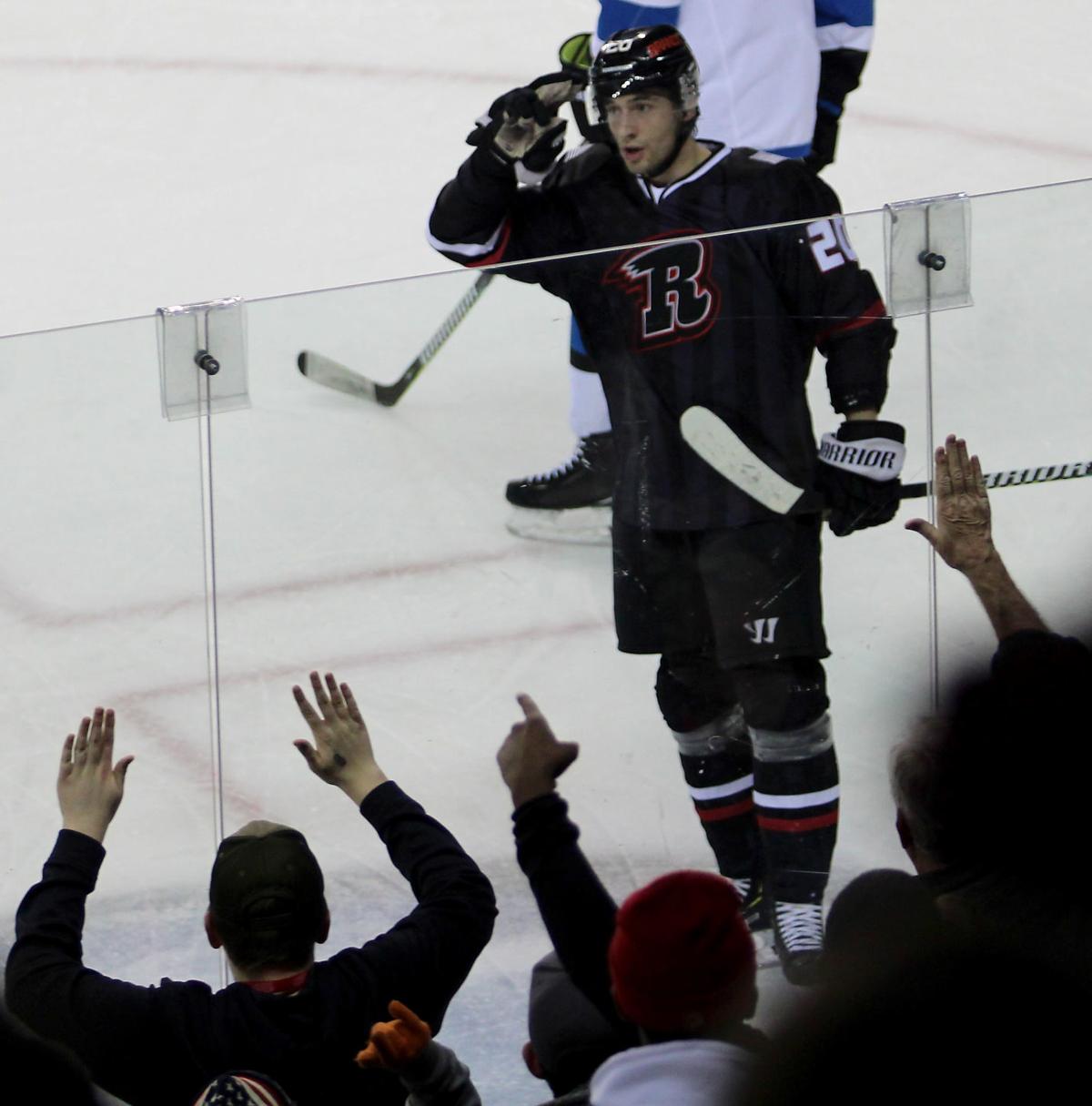 Brennan Saulnier salutes the Military Appreciation Night crowd after his first goal Saturday. Saulnier recorded a hat trick in the game against Wichita Saturday against Wichita at the Rushmore Plaza Civic Center. 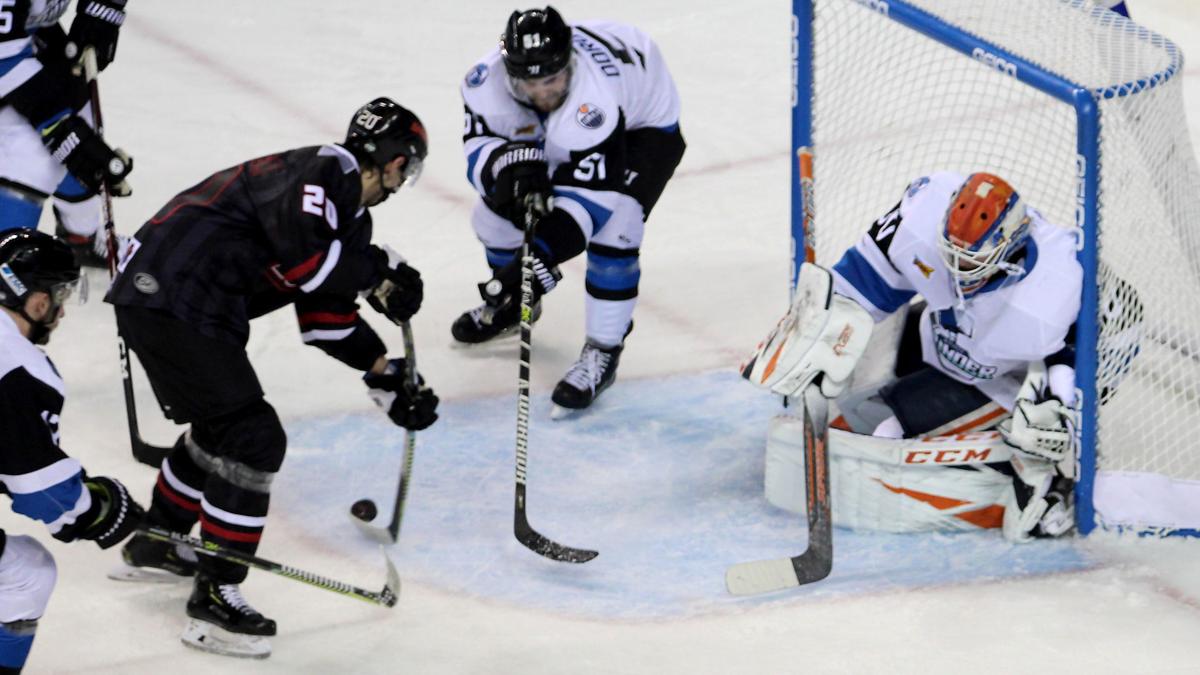 One of the largest crowds of the season was on hand at the Rushmore Plaza Ice Arena on Saturday night undoubtedly hoping to witness a game-matching thriller in Rapid City's overtime win Friday night.

The excitement was there and favored the Rush through two periods. Unfortunately, momentum switched benches in the third period as Wichita quieted the throng, overcoming a 3-2 deficit with five third period goals enroute to a 7-4 win.

“We had played good hockey and were fine until they got that tying goal in the third period,” Rush coach Danny Tetrault said. “After that, things got unraveled. They were a desperate hockey team behind in the standings and came out and played that way and we didn’t respond in the third.”

On a positive note, the crowd was treated to a rarely seen hat trick as Rush rookie Brendan Saulnier capped off a big week that included a spot in Wednesday night’s ECHL All-Star game with the three-goal performance.

Saulnier’s first period goal that gave Rapid City a 1-0 lead resulted off a collaboration by a trio of Rush rookies. Tanner Karty worked the puck loose behind the net and slid the puck to Saulnier in the low slot for a quick wrister conversion. Karty garnered his fourth assist on the tally while Stephane Legault was credited with his 14th helper.

The Halifax, Nova Scotia native's second goal of the night, an unassisted tally, resulted from another cleanup effort in front of the net with 14:49 remaining in the period to break a 1-1 tie.

And the third, also in the second frame, was a power-play effort, a one-timer from the right face-off circle set up by a cross ice pass from Keeghan Howdeshell. The power play goal was Rapid’s fourth in the last two nights and gave the Rush a 3-2 lead through two periods of play.

“On the first goal, my teammates worked the puck down behind the net and centered it me and I tapped it in,” Saulnier said. “The second was kind of the same working in front of the net and on the third I got a nice pass from Howdeshell and scored on a one-timer.”

Despite his own performance, Saulnier wasn’t about to deflect criticism of himself and his team’s performance in the loss.

“I think that one is on us honestly,” Saulnier said. "We are the better team when you go down the depth chart and we just didn’t hold on to the lead. We gave up a lot of chances in the third when we should have come out and played better defensively."

As on Friday night, the Rush were unable to contain Wichita in the final period as the Thunder's aggressive forechecking and physicality again took a toll with Wichita goals scored by Beau Starrett, Ostap Safin, Nolan Vessey, Stephan Fournier, and an empty netter in the final minute by Fournier.

The Rush final goal of the night came on a power play goal by Darian Romako (third of the season) assisted by Jalen Smereck (7th) and Tyler Poulsen (10th).

“We have to clean things up defensively,” Tetrault said. “We gave them too many Grade A chances. They have big bodies and they go to the net and they were hungry after last night’s loss and they out-battled us, out-willed us tonight. The good thing about is that we have a chance to come back (Sunday) and come back with a win.”

The Wichita win narrowed the gap between them and the third-place Rush to three points (49-46), though Rapid city has played three less games than the Thunder.

Brennan Saulnier salutes the Military Appreciation Night crowd after his first goal Saturday. Saulnier recorded a hat trick in the game against Wichita Saturday against Wichita at the Rushmore Plaza Civic Center.