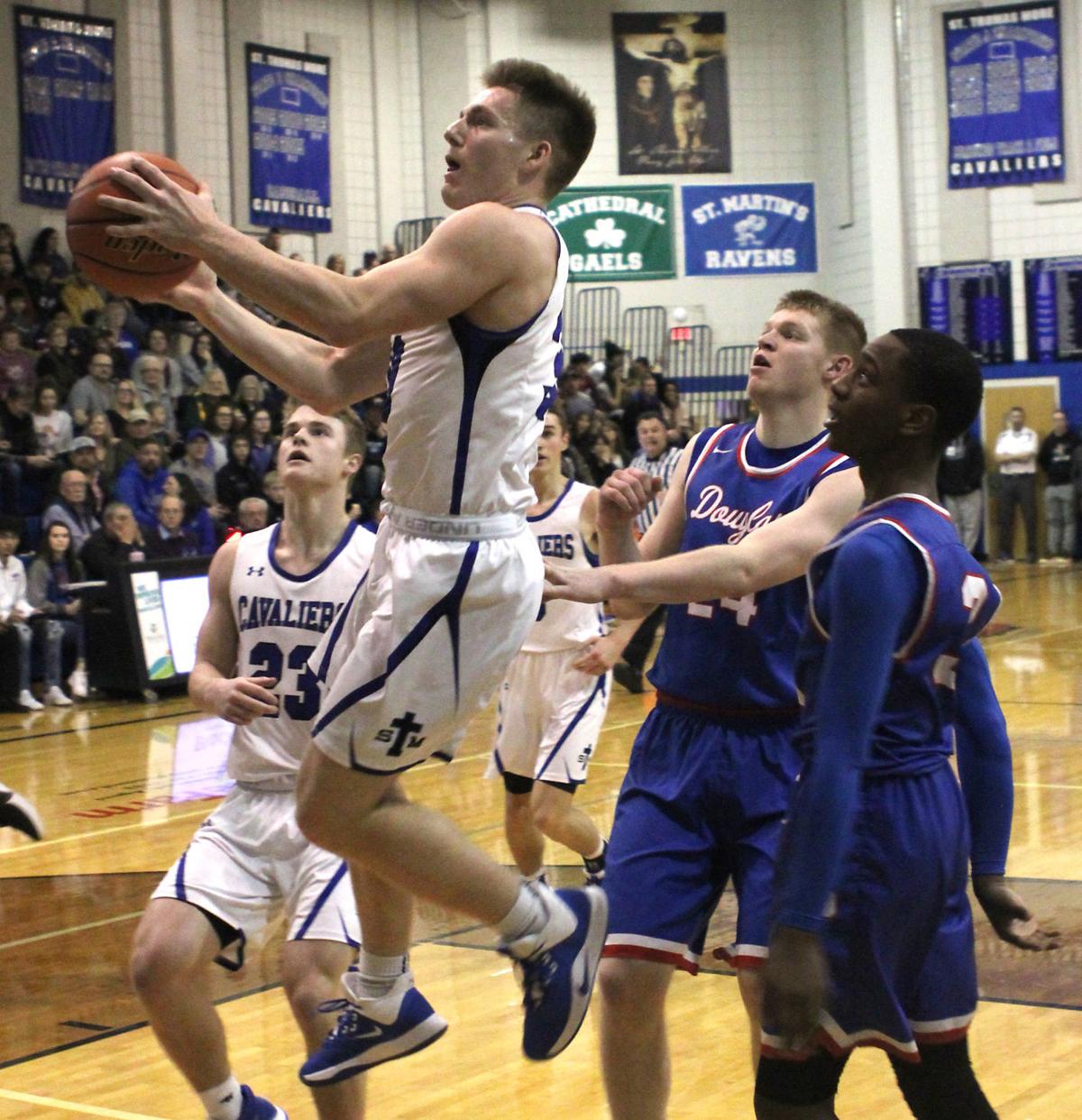 Ryan Wojcik drives through the lane for a basket for St. Thomas More during a win over Douglas Thursday at the STM Gym. 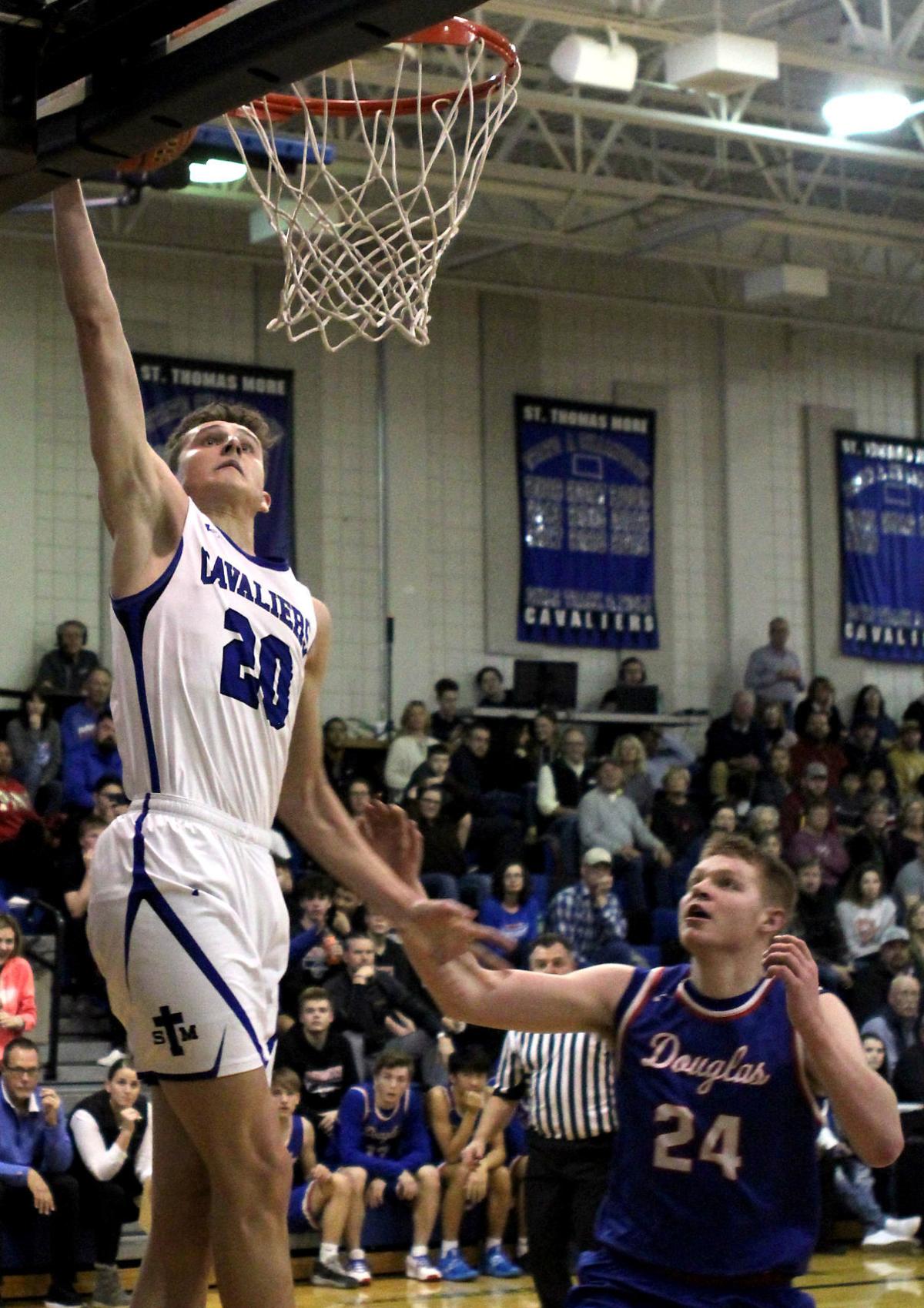 Connor Hollenbeck throws down a dunk in the second quarter Thursday night for St. Thomas More against Douglas at the STM Gym 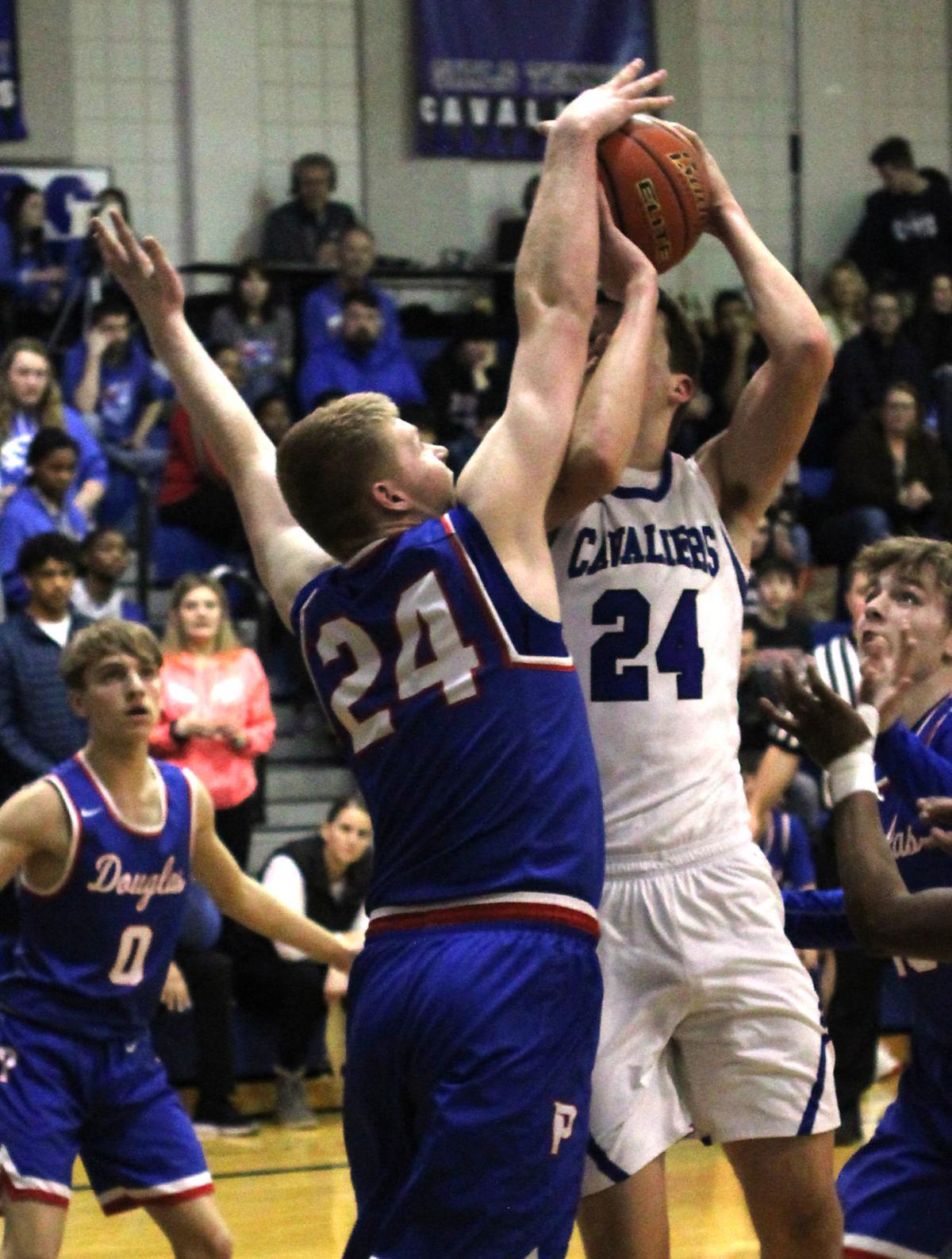 Douglas' Kearby Jindra gets a block against Ryder Kirsch for St. Thomas More Thursday night at the STM Gym.

As was the case from the first time the St. Thomas More and Douglas boys' basketball teams met, it was a battle early.

And like the Dec. 17 game in Box Elder, a 27-point STM win, the Cavaliers began to put away the Patriots in the second quarter Thursday night, running away for the 57-31 win at the St. Thomas More Gym.

Connor Hollenbeck's 3-pointer at the end of the first quarter gave St. Thomas More a 13-8 lead and the Cavalier defense did the rest, outscoring the Patriots 44-23 in the final three quarters.

It was far from a perfect game for the Class A unbeaten and number one team in the state — about 15 turnovers and 7-of-15 shooting from the free-throw line — but it was one where the Cavs showed their talent enough to take control against a scrappy Douglas squad.

"Douglas is a nice ballclub," veteran STM head coach David Hollenbeck said. "They are disciplined, they play hard and they shoot the basketball. They did a really good job in the first half getting in the paint and creating some problems with basket pressure. That's on them. They do a nice job."

The STM coach also thought his team had a nice effort, playing hard at times to overcome some struggles on offense.

"It was a little troubling with the 15 turnovers, or whatever we had there. That's just too many and unacceptable," he said. "When you don't shoot free throws, that means you are not focused. I don't think we came into this game focused enough and that part is a little disappointing. We've got some things to work on and another game next week."

Connor Hollenbeck, who hit a pair of 3-pointers in the first quarter and finished with 15 points, agreed with his dad and coach.

"I thought the effort was there at times, but I thought we could have executed better offensively," he said. "We played good defense, we pressed well, but on offense, we have to execute."

The Cavaliers, 7-0, scored the first nine points of the second quarter on five points from Hollenbeck, before Douglas came back with six straight points from senior David Severson.

Six points by Charlie Larson and a dunk by Hollenebck put the Cavs up by 13 at the halftime break, 30-17.

Senior Ryder Kirsch took over the third period, scoring eight quick points, including a back-to-back layup and dunk, and Hollenbeck's layup off a steal put STM up 43-26 going into the third.

Douglas coach Travis Miller said the STM defense is the best defense that they have played against this season.

"They are very fundamentally sound and they are always in the right position," Miller said of STM. "They have good athletes that can stay in front of you. They have really long kids that can cause problems trying to get the ball inside, trying to get passes around the perimeter."

The thing that Miller was happy about was his team's defense as well, holding the Cavs to under 60 points.

"They have been scoring more points and we kind of held them down a little bit," he said. "I was happy with how hard we played. Even with a little deficit, they played hard and never quit, playing until the end."

Kirsch led the Cavaliers with 17 points, followed by Hollenbeck and eight points from Larson.

As well as the team has played at times, Connor Hollenbeck said the Cavs still need to get in the gym and focus on things like free throws and layups and running their plays better.

"The talent is good and we're athletic," he said. "We have the talent to blow out teams, we just need to continue what we're doing and play hard."

"They work hard and they put in a lot of time in the off-season to get better," Miller said of his team. "They've improved a lot since last year. We're playing a lot of the same guys, but obviously that one year of growth has helped us."

St. Thomas More returns to action next Thursday at Custer in another Black Hills Conference tilt.

No. 2 Raiders roll to win over Govs

It's been somewhat of a slow start for the Rapid City Central girls' basketball team this season with multiple new faces on the court.

Ryan Wojcik drives through the lane for a basket for St. Thomas More during a win over Douglas Thursday at the STM Gym.

Connor Hollenbeck throws down a dunk in the second quarter Thursday night for St. Thomas More against Douglas at the STM Gym

Douglas' Kearby Jindra gets a block against Ryder Kirsch for St. Thomas More Thursday night at the STM Gym.