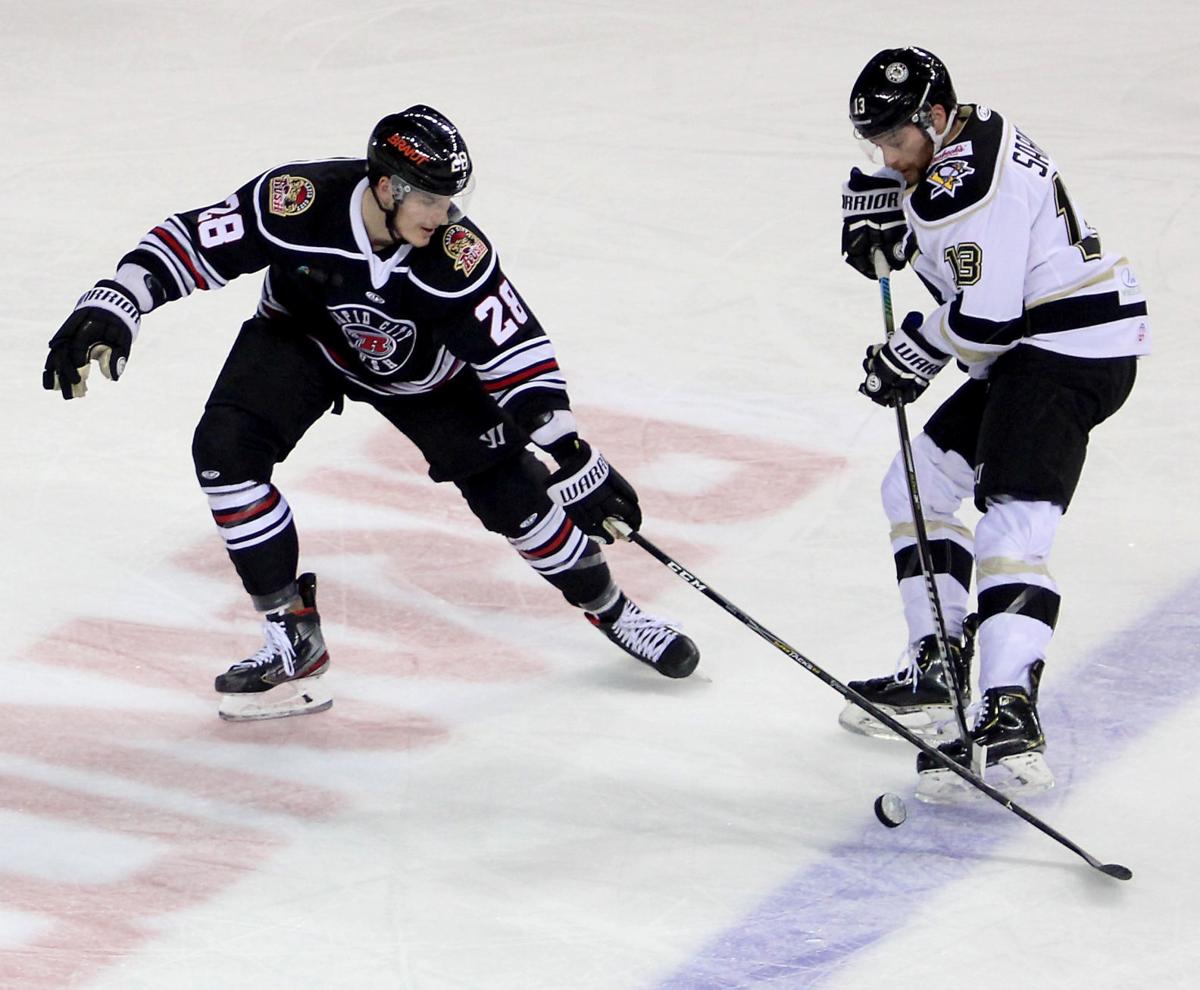 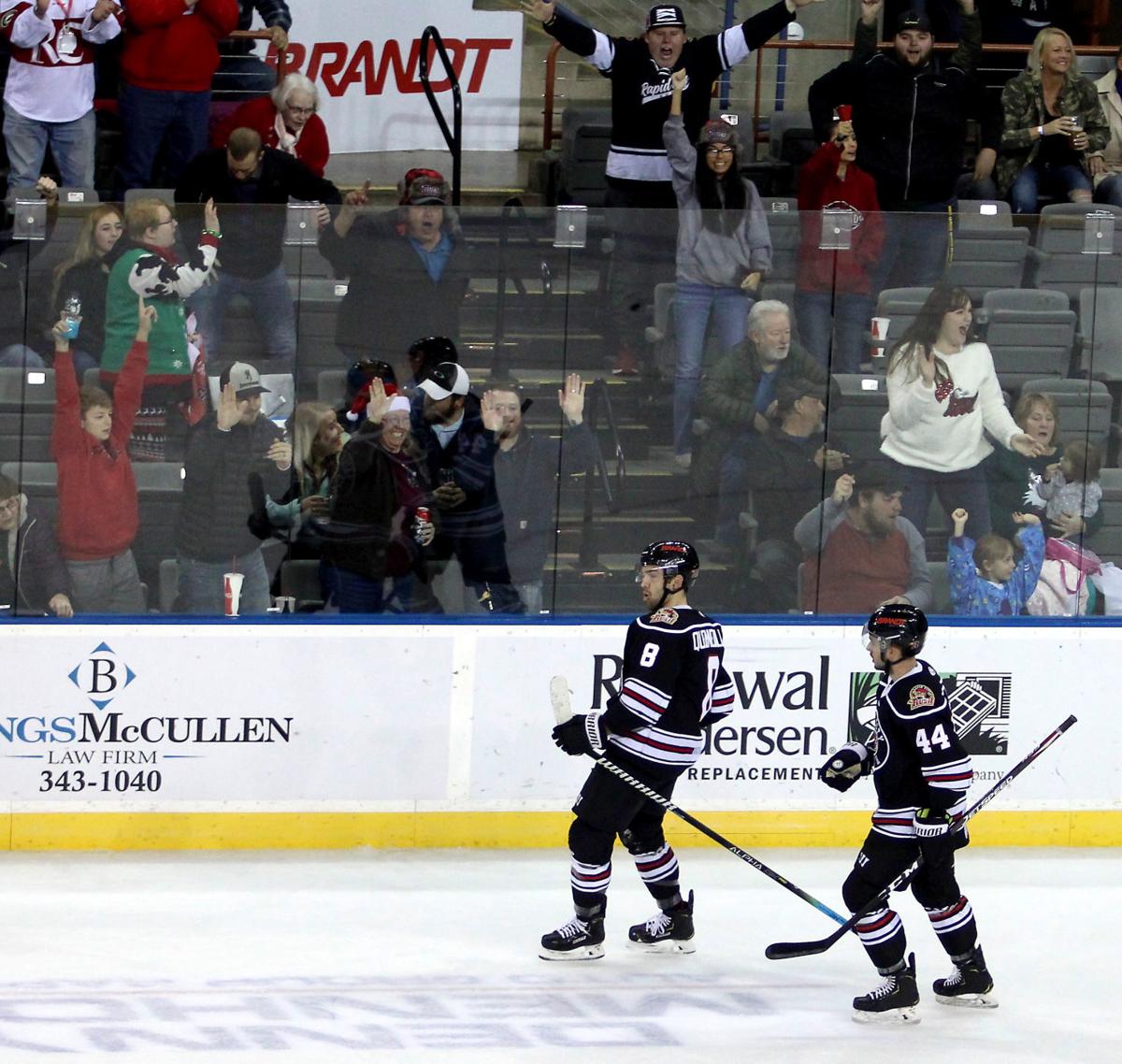 A dismal home stand came to a disappointing conclusion Saturday night as the Rapid City Rush (15-9-3-0) dropped a fourth consecutive game on home ice, falling to the Wheeling Nailers 4-2 at the Rushmore Plaza Ice Arena.

The loss, and three-game sweep by the visitors, was particularly painful given that Wheeling came into Rapid City with a sub-500 record and having won but one of nine on the road this season.

The outset appeared promising for the home team as in a reversal of recent outings, the Rush had the better of play in the opening five minutes, making crisp first passes out of the defensive zone and penetrating the Nailer blue line with puck control and setting up some Grade A scoring chances.

However, shots by Tyler Poulsen, Peter Quenneville and Stephane Legault avoided the reach of Nailer goalie Andrew D’Agostino, who was making his first appearance of the series.

Unfortunately, the aggressiveness later in the period allowed a Wheeling odd-man rush at the 7:12 mark of the period and the Nailers capitalized with a Chris Brown wrister from the right face-off circle found open space top-shelf-near post.

The Rush power play that has been dormant in the series evened the score at 1-1 with 3:19 remaining when a Quenneville scored on a one-timer from the left face-off circle setup by a crossing pass from Ryker Killins. The goal was the Rush captain’s 13th of the season for the ECHL second leading scorer. Trey Phillips had an assist as well.

As has been a pattern in this week’s series, Wheeling responded quickly (69 seconds later). After the Rush had failed to clear a Nailer shot, Yushiroh Hirano's one-timer from the right circle gave Wheeling a 2-1 lead after one period.

“What can I say, we are in a funk right now,” Rush coach Daniel Tetrault said. “The mistakes are hurting us and the guys are frustrated. We tried to stay positive all night, but we have to get back to basics.”

After end-to-end action with no shots resulting through the first five minutes of the second period, the Rush fell victim to a double whammy. Eric Israel drew a high-sticking penalty and Rapid City was penalized simultaneously for having too many men on the ice setting up a 5-on-3 Wheeling power play.

Two minutes and one second later, Wheeling had a 3-1 lead. In a series when an inch here and a second there have been vital, Nailer Renars Krastenbergs unleashed a shot from along the end boards that trickled into the net off a Tyler Parks pad, the goal coming an instant after the Rush had apparently avoided further damage by killing off the 5-on-3 power play.

“There was a mix-up on the bench. Coulter thought he was coming on the bench and then re-attacked and then Howdeshell jumped on,” Tetrault said. “And then at the same time, Israel gets a high sticking penalty. And then they go down and score with the penalty killed off. It’s tough, but no body is going to feel sorry for. We just have to work hard and get back on track,”

Wheeling dominated play for most of the remainder of the period part of a 17-5 Nailer shot on goal advantage in the period and lots of saves by Parks (35-of-38 on the night).

Backs to the wall has been a familiar posture for the Rush in the third period this season.

Ditto that on Saturday night, a situation made more dire by the fact that the Rush were playing with a shortened roster with the team’s second leading scorer, Giovanni Fiore, released by the parent club Arizona on Thursday and sparkplug Brennan Saulnier, suspended subject to a review by the ECHL league office on Monday.

“Fiore being gone hurt us, and with Saulnier out, I put (Trey) Phillips up front, and I put Killins up front to help out,” Tetrault said. “But our lines are all mixed up now, and it’s hard to develop any continuity with all the changes.”

But then again, you gotta believe. And for a while the Rush and the large “Christmas Night” crowd did when Howdeshell stick-handled his way to the net and converted a backhander with 15:17 remaining to close the deficit to one goal at 3-2.

However, it seemed even coincidences were aligned against the Rush as what appeared to be an accidental collision between Coulter and Hirano with 6:22 remaining resulted in a Coulter kneeing penalty. And a precious two minutes were committed to defense rather than trying to draw even.

Tetrault pulled goalie Parks with 1:30 to go in favor of an extra attacker though a furious final minute rally fell short including a slap shot by Quenneville that seemed destined to ripple the net. Chris Brown tallied an empty-netter to close out the Wheeling win.

“It would have been nice to tie it up there at the end, but Wheeling is a good hockey team,” Tetrault said. “They played well. They won a lot of battles on face-offs and blocked a lot of shots, and we were just a little too late. We showed up in the third period again but couldn’t make it happen. It’s been a tough week for us with all the personal changes. With all that, it’s probably a good thing to go on the road and have a chance to regroup.”

The home appearance was Rapid City’s last pre-Christmas appearance as the Rush travel to Allen (Texas) next week for a pair of games on Friday and Saturday night before returning home to host Wichita Dec. 27-28.

Talk to any basketball coach and they’ll tell you they want their team playing its best basketball at the end of the season.