Updates and news from the Nevada caucus

WOSTER: The challenge of Coyote hunting
Share this
{{featured_button_text}}
1 of 2 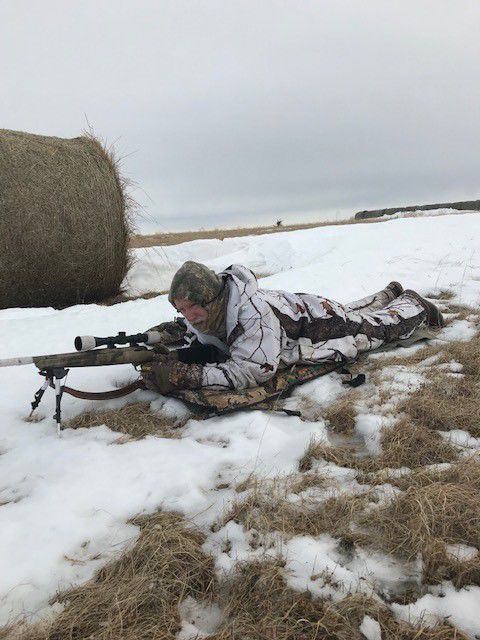 John Cooper prefers a prone position and the assistance of a bipod in his coyote hunts. At right, Jerry Pier likes to sit against something like a hay bale to cover his silouette. Both believe in concealment, calling and making the first shot count. 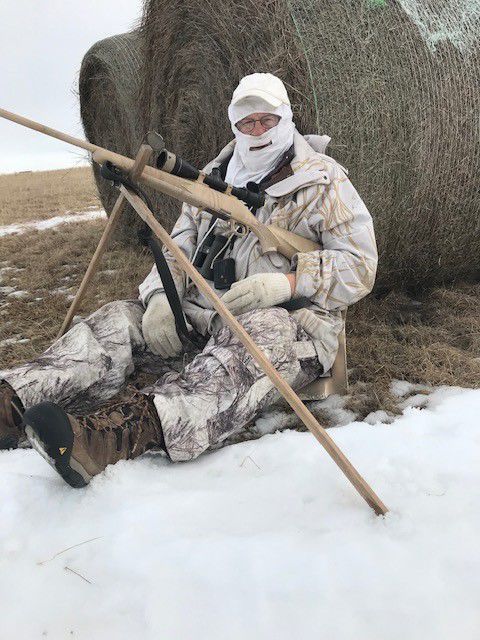 So you won’t find any high-capacity, fast-firing, military style weapons in their coyote-hunting arsenal.

What you will find are some smooth-handling, accurate, bolt-action rifles, along with a commitment to making one shot count.

And that’s one shot at a standing coyote, not a road runner. It’s the deception and the concealment and the accuracy they’re after, not a barrage of bullets fired at a running coyote. That’s where crippling occurs, Cooper says, and where the quality of the hunt is degraded.

“It’s about a quick, clean kill,” says the 75-year-old former federal game warden and state Game, Fish & Parks Department secretary from Pierre. “And if you start shooting coyotes on the run at 200 yards, it’s likely to be a wounding shot. We shoot accurate, bolt-action guns with the idea of killing on the first shot. We don’t get into a field-of-fire-type thing where you’re taking five shots at a running coyote.”

Cooper shoots .223 or .22-250-caliber rifles on coyotes. Pier has a .243 caliber he likes. Cooper tries to shoot from a prone position, off of a bipod. Pier shoots sitting up, with his rifle on shooting sticks and his back to something like a hay bale to break up his silhouette.

“Jerry’s accurate out to about 300 yards shooting off those sticks. I’m not as good long range as Jerry is,” Cooper says.

Pier, 76, who lives in the country near Pierre, started hunting coyotes more than 30 years ago. He says there’s no place on earth he’d rather be than in an expansive piece of West River prairie, trying to fool what he considers to be one of the smartest creatures on Earth.

“Coyotes are extremely smart, with great instincts, incredible eyesight and hearing, and they can smell you. They have a great memory, too,” Pier says. “Coyotes’ decisions are life and death. The survivors pass that survivability on from generation to generation. And they’re not only surviving, they’re thriving.”

Pier has slowed down with age, but he still hunts at least 15 times a winter, often with Cooper. They’ve developed a sense of teamwork in how they set up, how they call and how they signal to each other with a minimum of movement.

“The more you move around, the less chance you have of getting a coyote,” Pier says.

Cooper, who has been hunting coyotes since he was a high schooler in California, says he and Pier have tried taking a third hunter along. But it doesn’t work as well.

“You just have that much more scent and sound and opportunity for that coyote to pick up on something,” he says. “With just the two of us, when we’re set up well and focused, we’re pretty good. And boy, is it fun to have somebody there to share it with.”

They use both electronic calls and mouth calls to attract coyotes. Call sounds include coyote howls, rabbit squeals, fawn bleats and high-pitch whimpers of female coyotes. They call and watch and wait, wearing camouflage that fits the terrain.

Both prefer cold-season hunting, which means they don’t get shots at the young-of-the-year coyotes that are easier to fool and kill. The dumb young coyotes are either dead or older and wiser by the time winter hunts begin.

“People are now hunting coyotes in July and August, if not earlier, so they’re getting some of those half-grown adolescents that are prone to make mistakes. And when they do, they die,” Pier says. “To each his own, but I kind of think guys who are doing that are wrong.”

Pier and Cooper sell the coyotes they kill for their fur. This year individual trapped or snared coyotes with excellent winter fur are selling for up to $80 or so. Coyotes that have been shot will sell for less than the top price.

“You’re not going to make much money on this deal, though, not the way we do it,” Cooper says. “We’re not in it for that.”

They’re in it for the time outdoors, the time together — even when concealed and silent and motionless — and for the chance to hunt a creature that knows the survival game as well as anything that lives.

“I like the challenge of hunting them,” Cooper says. “I don’t think there’s a critter out there that has all the finely developed senses of the coyote. They win a lot. And we win sometimes. And when we do, it’s really something.”

One careful shot at a time.

John Cooper prefers a prone position and the assistance of a bipod in his coyote hunts. At right, Jerry Pier likes to sit against something like a hay bale to cover his silouette. Both believe in concealment, calling and making the first shot count.