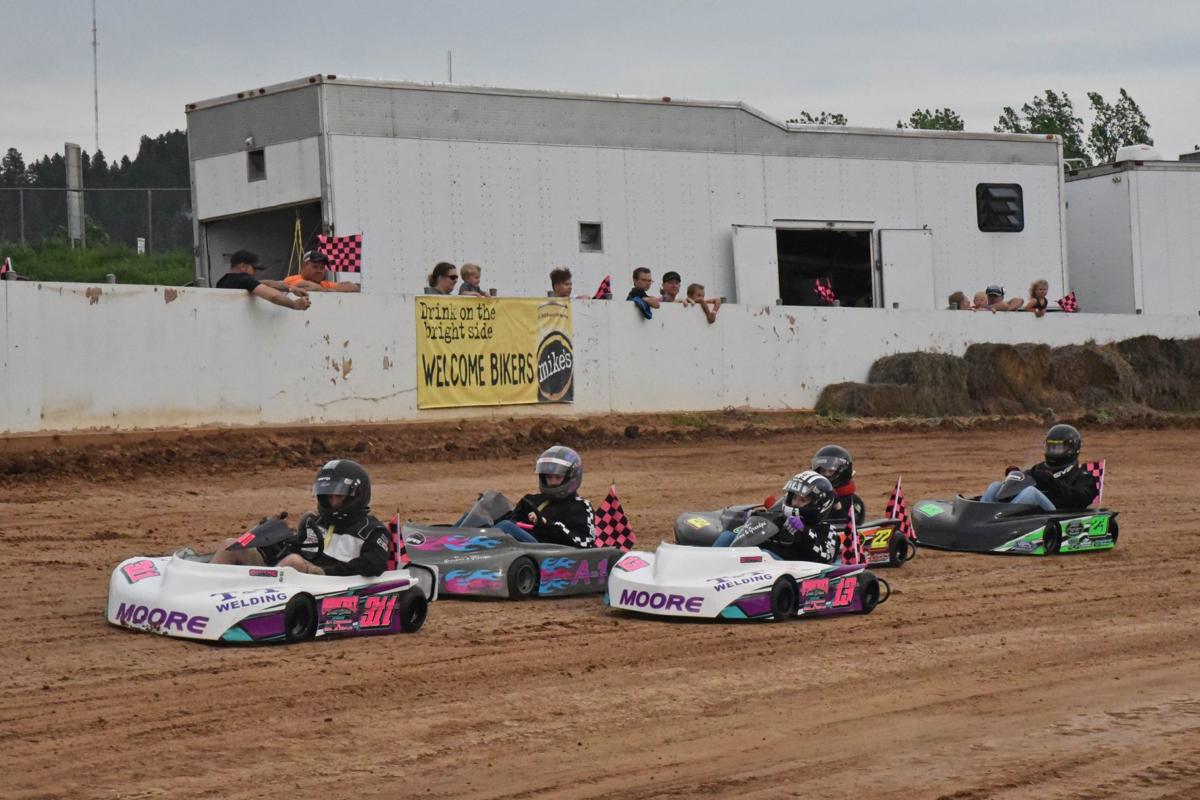 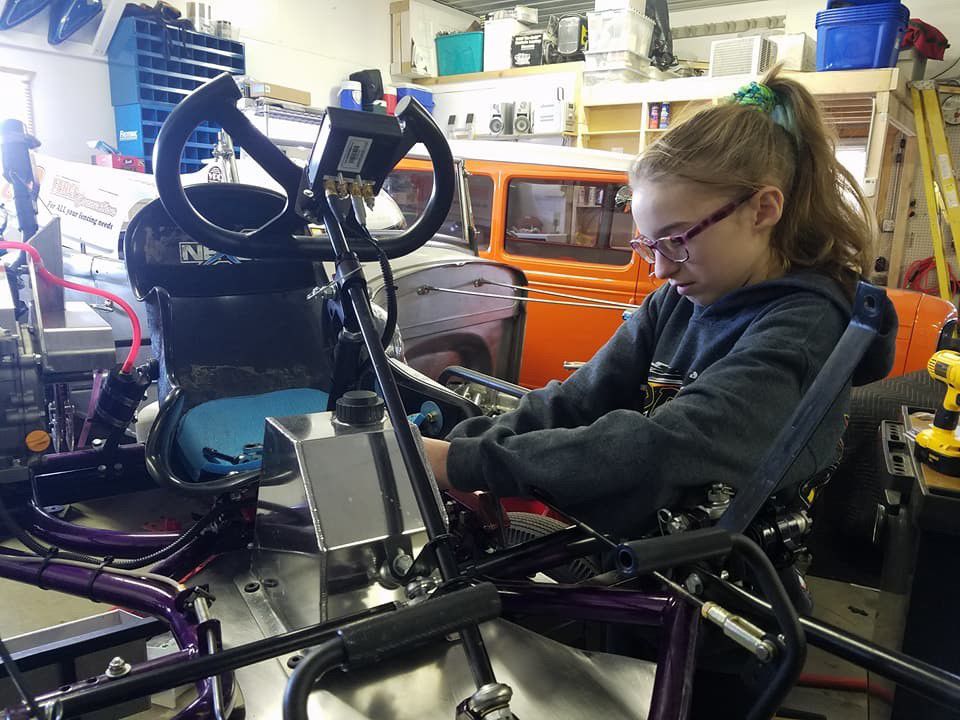 A member of Black Hills Kart Racing, Emily Price, 15, works on her go kart in the garage before competition. 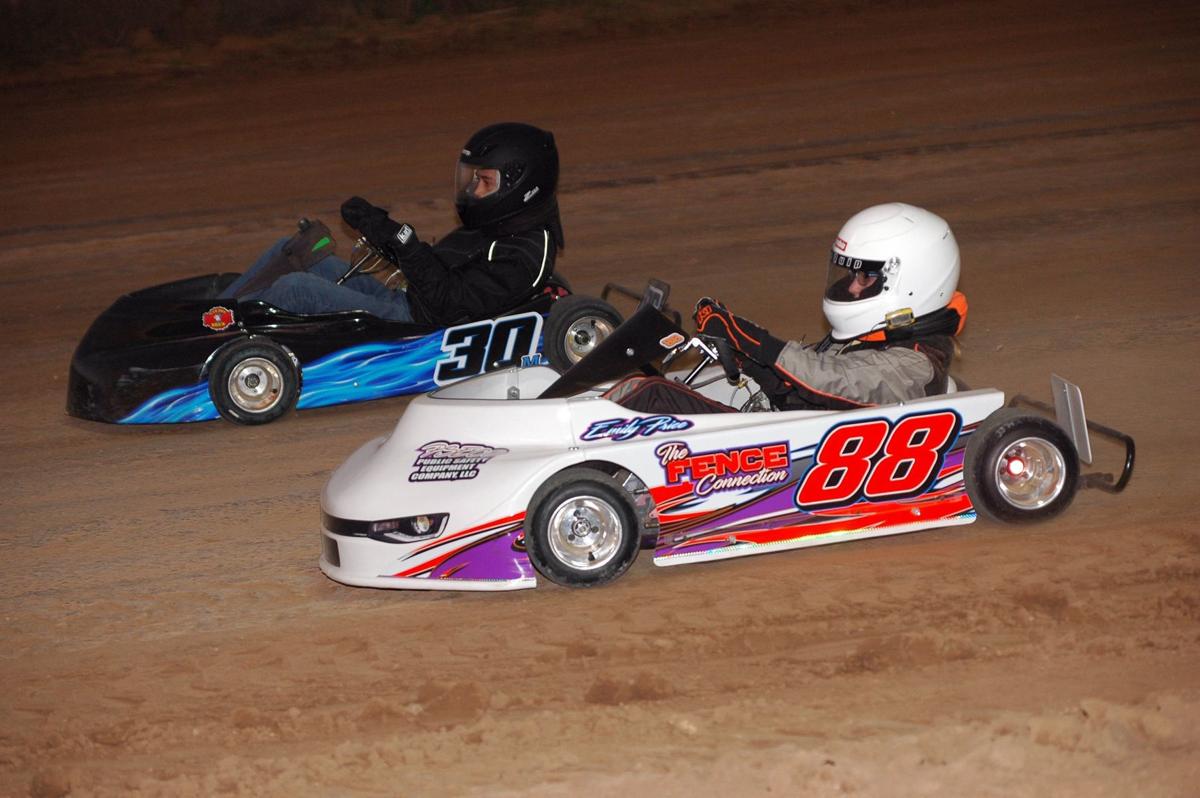 Emily Price, 88, and another race compete recently in Black Hills Kart Racing at the Jackpine Gypsies short track in Sturgis. 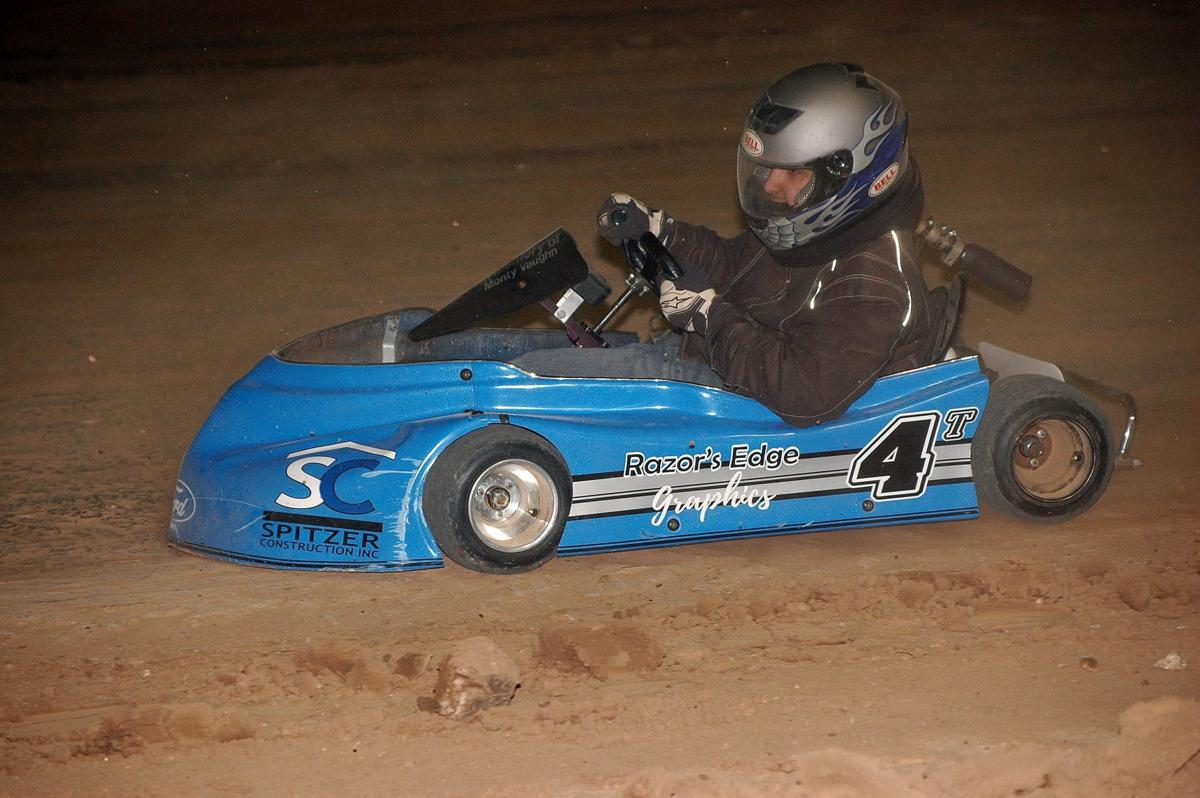 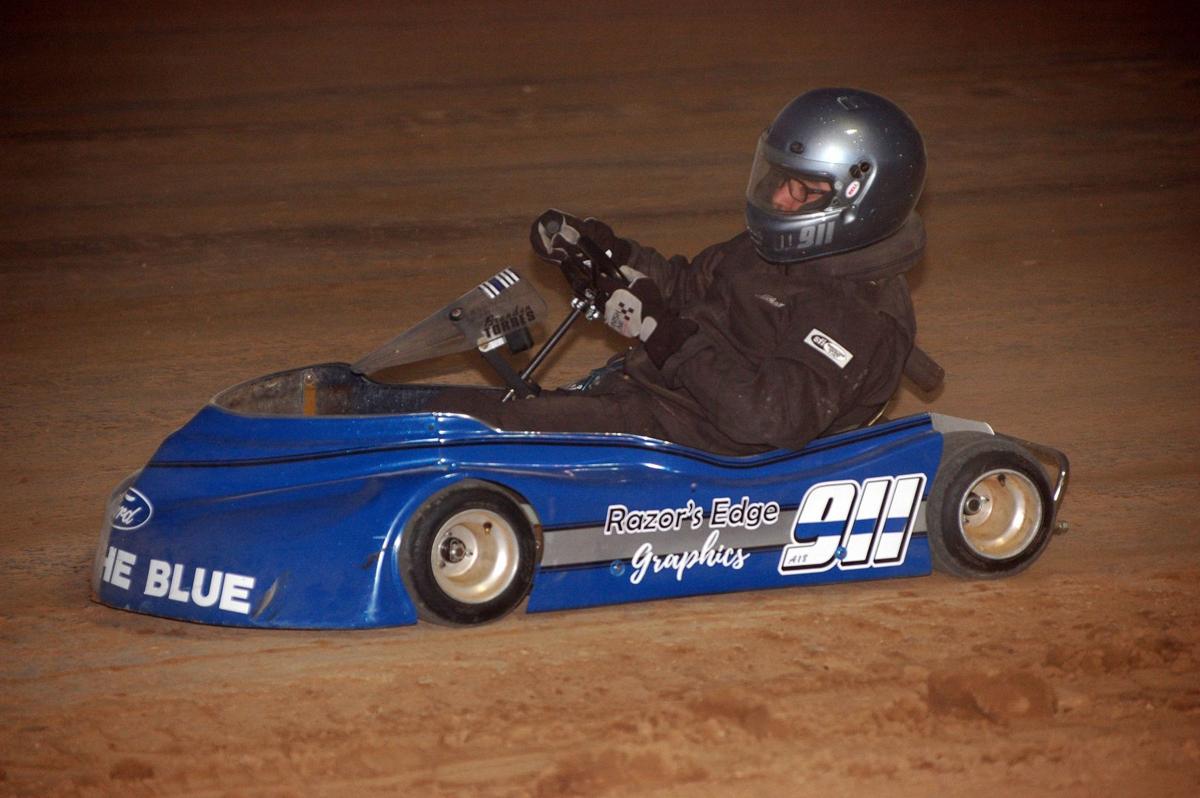 According to Black Hills Kart Racing spokesman/director David Price, the former is of the “fun carts," found at amusement parks and the like, while the latter “race karts” are found at mostly dirt ovals in these parts.

“There are some similarities, but they are out weighed by the differences,” Price said. “Amusement park drivers are out on a lark, where our drivers are serious competitors.”

He is quick to point out that through the seriousness, the drivers have a profound sense of fun.

“It's a way to race without breaking the bank," Price said.

Unlike other forms of dirt motorsports, karting sates the speed appetites of both kids and adults alike.

“There's a certain mindset that karting is for kids; and it is," Price said. "Young kids, old kids, the kid in all of us.”

Some of the classification jargon can be hard to get a hold on at first glance. Since today's karts are more or less cut of the same form and shape, the nuances of each division has an almost hidden agenda. After a couple of visits to a kart track, it'll easily make sense.

The Rookie Class is for, well, rookies in the truest form. Racers are of ages 5 to 8, with a more restrictive restrictor plate to keep speeds at a controllable-and parent comfortable-level. Once drivers out grow their rookie status, they are likely to move to “Junior 1” status.

These pilots are of the 8 to 10 age range, and the motor gets to breathe a little more. Naturally, the evolutionary process takes these racers to “Junior 2,” 10 to 12 year old racers with even less motor restriction.

Feeling confident in their abilities, the next move is to “Junior 3,” where the restrictor plate is a piece of the past. Driving age is anywhere from 12 to 15, getting into legal driving territory.

Moving to a “grown up” ranking, 16 and older drivers enter the “Adult 212” zone. “212” is a well known engine configuration in karting circles, of which there are a few options designed to keep the higher dollar power-plants away.

The gals of this age group get to race amongst themselves with in the “Ladies 212” boundaries. It should be noted that the fair gender is welcome to wheel a kart among all divisions.

Fielding a kart is kinder on the budget, but like all forms of motorsports competition, what you want and what you need dictate how deep in the pocket you're likely to dig. Once you have the kart purchased, your next expense is transporting it from home to track.

In an age of diesel gulping haulers the size of mobile apartment complexes, the low entry budgeteer can make do with an empty truck bed and a tool box. An enclosed trailer is a later option, which is perfect for housing kart, tools and the inevitable barrage of spare parts every racer acquires.

Two karts? Have a nifty stacker on castors fashioned for the haul. Doled out over a season or two, the cost could be less than if one collected stamps as a hobby.

Price's daughter, Emily, is one of the reasons he became interested in resurrecting an almost comatose form of racing in the area.

“She wanted to race, and there were so few tracks left,” he said. “It was like no one was going to pick up the pieces and put together again.”

Now at 15, Emily has graduated among the rank and file to the Junior 3 berth for the new season, which, thanks to relaxation of Covid-19 fears, began in earnest June 13 at the Jackpine Gypsies short track in Sturgis.

“One of the benefits of racing at an early age,” Price says, “is it helps with their maturation. Not only do they get to know what they can do with their abilities, they learn the process of working for something you want.

“With Emily, if she doesn't do the work, we don't race. I'm proud to say we've almost got a perfect record.”

It's a lesson in sacrifice.

“Racing begins and ends in the garage," Price said. "If you don't like that part, then this isn't for you.”

One member of a long time racing family well regarded in the area, Branden Torres, praises the hands on approach.

“It's so cool to see these kids using their hands, not just their thumbs,” he said. “And they're not at the controls of a computer, TV or tablet.”

His son Tristan has moved through the ranks to join dad in the Adult 212 group this year.

“He's always known if you want to get better, you study. You work. You just do it," Torres said.

There is another perk that both Price and Torres agree on.

“You get to spend time with your kids,” Torres said. “It's such a bonus that I not only get to race with my kid, but we spend a lot of time together on and off the track.”

One of the fundamental tenets Price and co-founder Wade Bahr established is there is to be no monetary rewards.

“Trophies only-first, second and third. We don't do participation trophies," Price said. "This is a participation sport and like in life, it's not always fair.”

Which makes balancing the realities and fun-factor that much more demanding.

“The kids are good with it. They're having fun as long as we make it a positive experience," Price said.

Corner marshal Kenny Jacobs summed it up with an adult take on the racing experience: "Tonight we're not Republicans, we're not Democrats. We're racers," he said.

As leader of the kart brigade, it does beg the question of what will David Price do when his daughter is ready to make a life of her own, that may not include this shared weekend activity

“I'll stay on for awhile,” he says after a pause. “It's a lot of hours, but to see the kids' smiles when they get out of their karts keeps me going. Going until someone comes along to take it to the next level.”

Opening night brought more than 35 drivers to usher in the new season, which kept Price hopping most of the night.

The night served as a reminder of one of groups staunchest supporters, hosting the Shawn Moore memorial. Moore passed away a year ago almost to the day of the night's program.

“Shawn was one of those guys you could always count on,” Price said. “He helped so many drivers, so many teams.

“He was one of those behind the scene guys our sport tends to ignore, but can't exist without.”

Aside from racing on the Jack Pine Gypsy soil, karters alternate weekends on their own ground next to the Black Hills Speedway. Shawn McHenry and Gerard Gerod Torno run that show on Saturday afternoons.

“The next Dale Earnhardt or Steve Kinser could be in our midst right now,” a pit crew member said in passing. “And we're nurturing them. Molding them. Growing them.”

Karts. For the kid -and racer- in all of us.

The Ivy League on Wednesday became the first Division I conference to suspend all fall sports, including football, leaving open the possibility of moving some seasons to the spring if the coronavirus pandemic is better controlled by then.

Rosencranz coming around for Bismarck

During the abbreviated college baseball season, Jaxon Rosencranz popped a home run in half the games he played for Augustana.

To say it’s been a crazy year in rodeo is an understatement. Multiple rodeos, big and small, have been canceled because of Covid-19. Each week…

Cruising along after a couple of games in the 25th annual Mt. Rushmore Classic, the Rapid City Crush 18U girls' fastpitch softball team sudden…

It was a much-needed and surprise return for outfielder Blake Weaver to the Rapid City Post 22 lineup.

A member of Black Hills Kart Racing, Emily Price, 15, works on her go kart in the garage before competition.

Emily Price, 88, and another race compete recently in Black Hills Kart Racing at the Jackpine Gypsies short track in Sturgis.