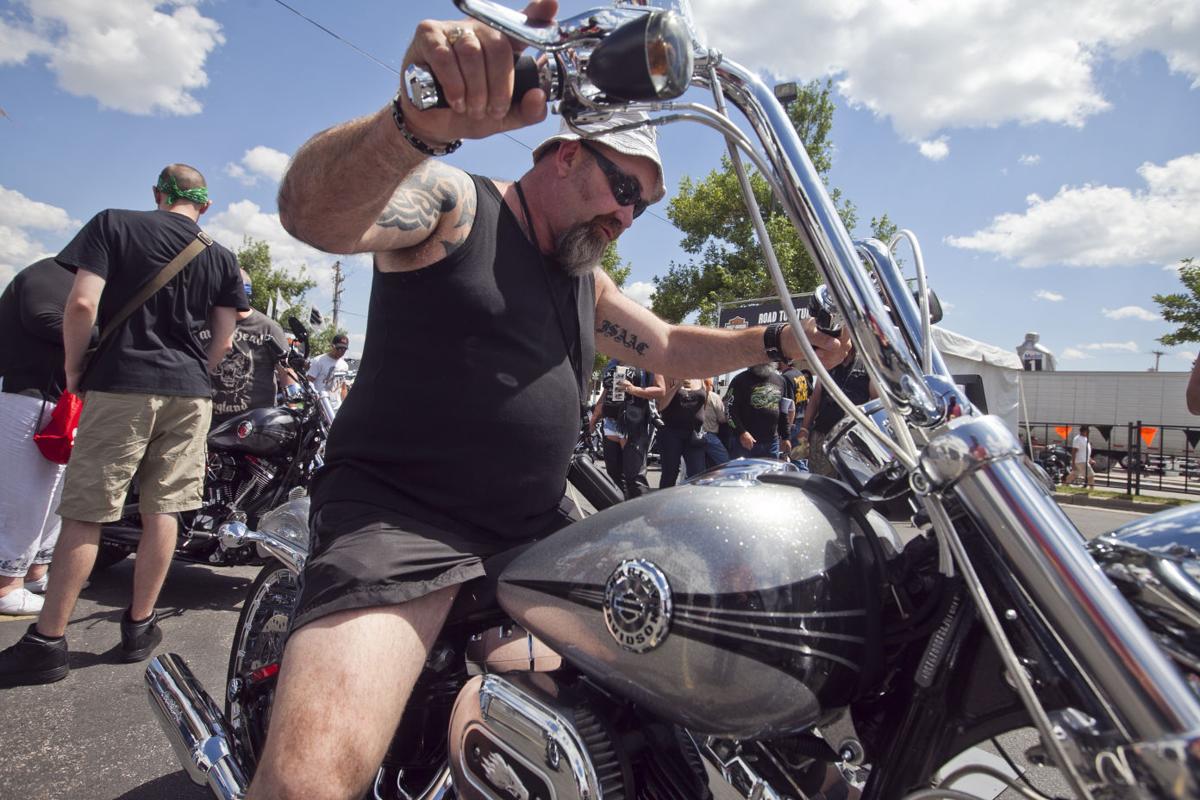 Ian “Big E” Doignie, of Shropshire, United Kingdom, sits on a Harley-Davidson while looking at motorcycles Thursday afternoon during the 75th Sturgis motorcycle rally. Doignie, whose first time is in the United States, travelled to the rally with two friends saying it has been a great trip and was everything he expected. 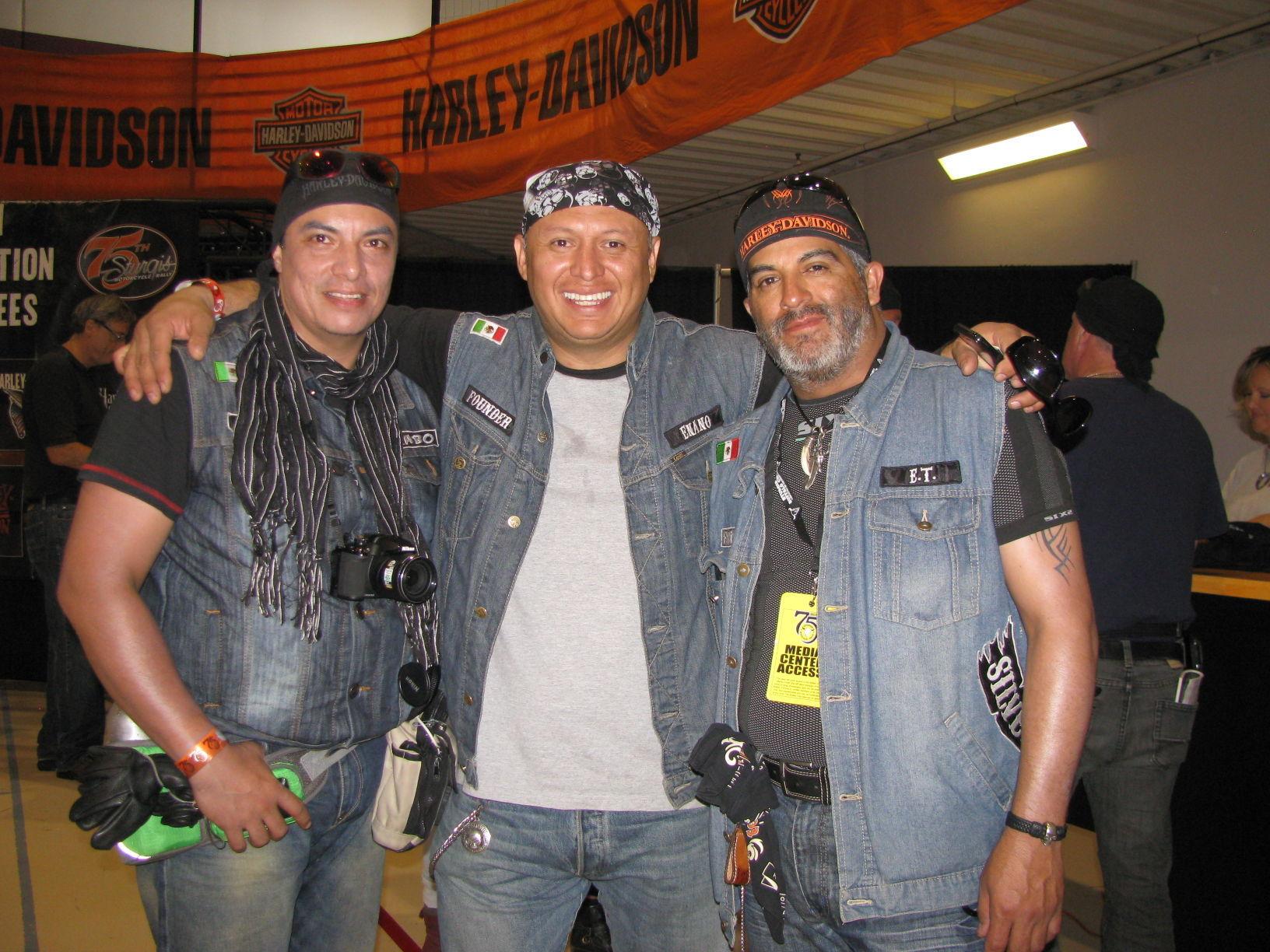 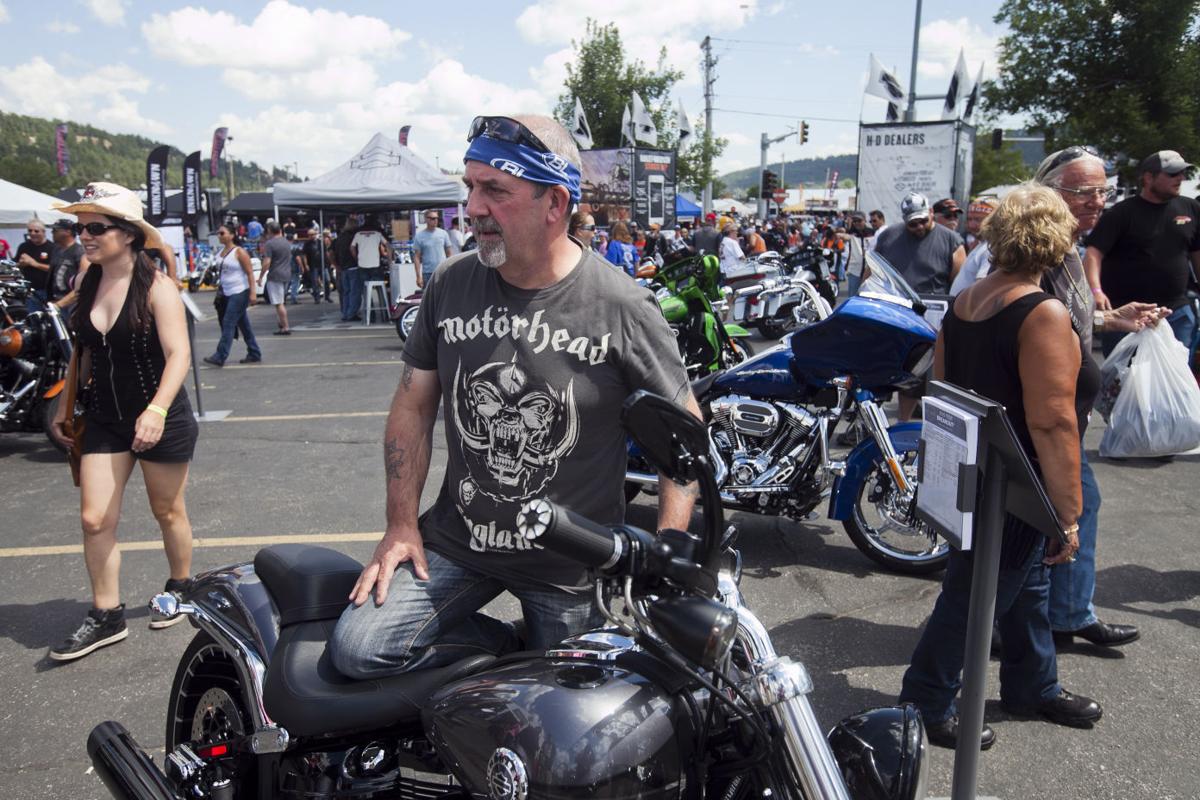 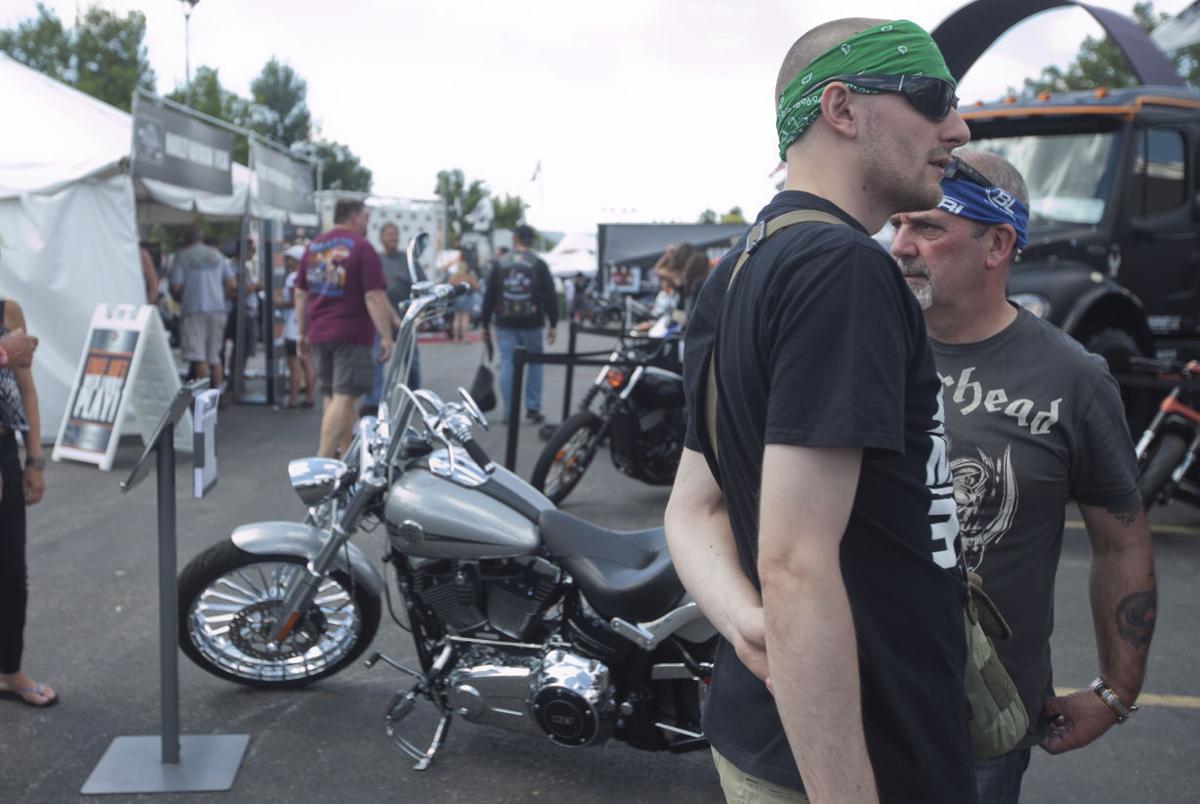 No matter what the language, the name "Sturgis" needs no translation.

Ramirez and his friends, Gabriel Sanchez and Elias Gasca, all members of a Mexican motorcycle club, have logged 7,456 miles on their trek to Sturgis for the 75th holding of the annual motorcycle rally.

The three stood in line at the Sturgis Community Center Thursday, ready to order custom Harley-Davidson T-shirts to commemorate their week at the rally.

The trio is part of a growing contingent of bikers and curious tourists from across the world who make the long and sometimes arduous journey to South Dakota for the rally and a taste of Americana they can't get anywhere else. This year in Sturgis, the presence of foreign visitors seems more prevalent than ever.

They spend thousands in air travel costs and to have their cycles shipped here. But like rally patrons of any nationality, they all want to feel a part of the unique culture that surrounds the Sturgis rally.

"Sturgis," says Roman Iglin, of Belgorod, Russia, "is know around the world."

Although his English may be a bit broken, Iglin's knowledge of motorcycling is top notch. He is the chairman of the Federation of Motorcycling Biketourism of Belgorod Region in Russia, near the Ukranian border.

He's traveling with his brother, Evgeny Kapustin, head of the International Center of Education and Cooperation of Belgorod State Technological University.

They began an around-the-world motocross in June, dedicated to the 70th anniversary of the end of World War II. Their bikes were shipped to Los Angeles and they took a little side trip to Sturgis before they head south to Mexico and South America.

"My English not good," Kapustin said. But he was able to muster this: "Sturgis. Good rides."

The total length of the brothers' route is about 28,000 miles. They will visit 30 countries before they are finished.

The Sturgis Rally Department does no direct marketing to the international audience outside of social media, said rally director Brenda Vasknetz.

"We can reach the entire world that way," she said. "Facebook is our largest international marketing tool."

The Sturgis motorcycle rally Facebook page has about 200,000 followers with about 3,500 new page "likes" just this week.

While most foreign visitors have mainly positive things to say about Sturgis and the rally, a Norwegian visitor pointed out one drawback.

The only complaint Venche Runde has of her first trip to the United States has nothing to do with traffic or motorcycles.

“The hotel breakfasts are absolutely terrible,” said Runde, whose home country and European neighbors are known for hotels that serve hearty breakfasts with varied sausages and baked goods.

The international rider, from Haugesund, Norway, is touring Sturgis with a group of 26 other Europeans as a part of the Harley Owners Group motorcycle club. The caravan has seven riders from Denmark and two from Sweden. The other 17 riders are from Norway.

The group flew into Denver International Airport last week and all rented motorcycles from a Harley-Davidson store in Denver. They have been touring the Rocky Mountains, Yellowstone National Park and Montana before diving into the Black Hills on Thursday. The trip will cost each rider about $7,000, a price Runde said has been well worth it.

Runde said the motorcycle culture in Norway is a bit more tame than in the United States. She said her home country doesn't have the historical connection to gang violence or outlaw behavior as it does in the U.S.

And despite the increased traffic in the Black Hills from the Sturgis rally, Runde said her group isn’t phased.

“The people and the traffic in the United States and even Sturgis are much more efficient and much more faster than in Norway,” Runde said. “We have a population of 5 million people. Hello, we’re used to this.”

Jem Symmonds and his son, Shaun, of Shropshire, England, flew from London to Chicago then to Rapid City to attend this year's anniversary rally.

"I absolutely love it here," Jem Symmonds said. "The atmosphere is fantastic. The local area is beautiful, and the people are friendly."

But the strong American dollar has weakened their purchasing power. On Thursday, a British Pound was worth $1.55 American, when it was worth well over $2 just a few years ago.

Symmonds is owner of Top Dog Games Limited., a company which provides slot machines and other games for pubs, clubs and bars in the U.K.

Symmonds also had another motive for attending the rally. He’s interested in buying used Harley-Davidson motorcycles and shipping them back to England to sell. He said he found about four or five this trip, but wants to buy 25 bikes next summer and begin shipping them on a more regular basis.

"I don't think you've really been to a motorcycle rally until you've been to Sturgis," he said.

Ian “Big E” Doignie, of Shropshire, United Kingdom, sits on a Harley-Davidson while looking at motorcycles Thursday afternoon during the 75th Sturgis motorcycle rally. Doignie, whose first time is in the United States, travelled to the rally with two friends saying it has been a great trip and was everything he expected.