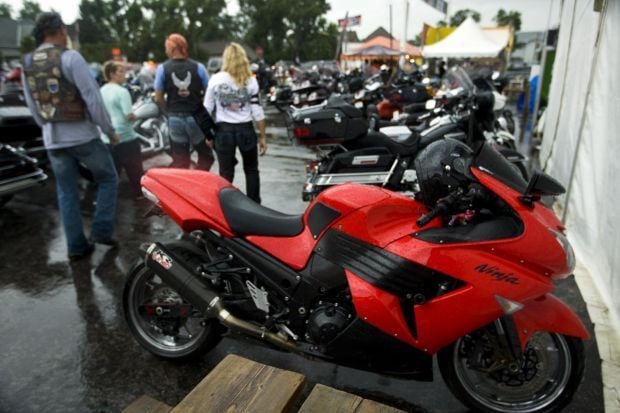 A group of bikers walk past a Kawasaki Ninja motorcycle during the Sturgis motorcycle rally. Despite being a Harley-Davidson centered event, sport bikes have been more accepted since the rally began 74 years ago. 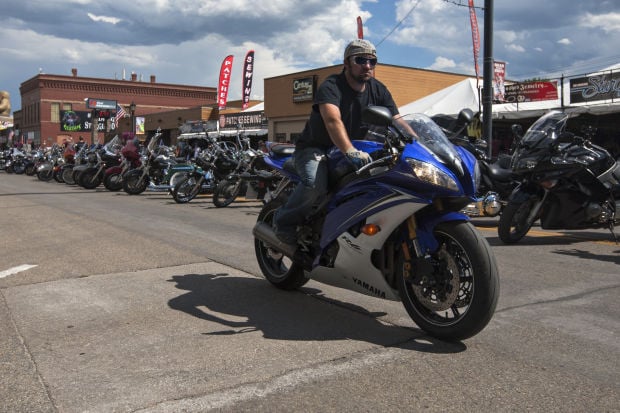 A biker rides a Yamaha motorcycle past a line of parked bikes while finding a place to park on Main Street at the Sturgis motorcycle rally. Riders of non Harley-Davidson motorcycles at the rally have become more accepted over the years .

A few decades ago, the prevailing sentiment among most bikers at the Sturgis rally could be summed up thus — ride a Harley or get the heck out.

In fact, some rallygoers of yore showed outright animosity toward foreign bikes. One tradition involved dropping a foreign cycle from a crane and dragging it down Sturgis Main Street as Harley owners roared. Another event held by Harley-Davidson riders featured a bonfire where foreign bikes were stacked, burned and melted together amid cheering crowds.

But the times — and the rally roadways — they are a-changing. As foreign-made cycles have increased in both quality and popularity, more riders are coming to Black Hills riding something other than Harley-Davidsons. And with the emergence of other American-made bikes like Indian and Victory, it appears many Harley riders' disdain for other brands is starting to wane.

Eli Gabriella, of Loveland, Colo., is an avid Harley rider whose father even owns a 1936 Harley-Davidson Knucklehead that was passed down from his grandfather. Harleys, he said, are practically in his blood. But he said that there's no reason to disrespect other bikers if they ride another brand.

"The way I see it, we're all doing the same thing and taking the same chances," he said. "So what you want to ride doesn't really matter,"

As sales manager of Black Hills Powersports in Rapid City, Lyle Crowser spends most of his time selling or working on Yamahas and Kawasakis, both Japanese-made cycles. Crowser, 59, is aware that Harley-Davidson bikes tends to dominate the rally, but he's noticed more foreign bikes and trikes on the road in recent years.

"To me, there's a lot of motorcycles that are as good, if not better in some ways, than Harley-Davidsons that cost a lot less money," he said. "But Harley-Davidson has done an incredible job of making themselves into an iconic brand."

In the past, the disrespect shown toward foreign motorcycles reached outrageous proportions.

Rod Woodruff, owner of the Buffalo Chip Campground, said Japanese motorcycles 30 years ago were jokes and looked on with contempt. It was, quite literally, a burning contempt.

"We'd pile up a lot of the little Japanese bikes, then turn on a jet-fueled dragster, which was a jet engine, in front of them," he said. "It would act like a blowtorch so all the bikes would be melted together."

Back in 1993, Big Ed Beckley jumped over what had become a pile of superheated motorcycle parts on a Harley-Davidson after two ramps were set up between the pile, he said.

Woodruff said that kind of thing hasn't happened for many years. As a biker and businessman, he wants the rally to be inviting to all motorcyclists, not exclusively Harley riders. "We kept getting calls from people saying 'I don’t have a Harley, is it safe to go down there?'" he said. "So we quit doing that."

Robin Willert, 63, who owns and operates a bike shop in Erie, Colo., that specializes in Harleys, said he has missed four rallies since 1969. He recalls that a "bike drop" was a popular activity back in the 1980s.

"That was when a foreign bike would be lifted high up with a crane and dropped down," he said. "It would be chained to the back of a Harley and dragged down Main Street while people on the sidewalk cheered."

Woodruff, a Harley rider himself, said Harley-Davidson has done an incredible job of weaving its brand into the fabric of American motorcycle culture, not to mention the Sturgis rally culture.

"I don’t know if there’s any other brand, of any product, that has been applied more often as a tattoo," he said with a laugh.

The opening of an Indian Motorcycle dealership in Sturgis, where new models have been launched, has also tamped down the Harley dominance at the rally.

"Indian was the first bike here, and we feel this is our rightful place here now," said Scott Wine, CEO of Polaris Industries, which owns Indian.

To be sure, other bikes are gaining popularity, but a quick look at any parking lot full of motorcycles will tell you that Harley-Davidson is still the most popular brand at Sturgis. Woodruff said he estimated about 70 percent of motorcyclists at the rally are riding Harleys.

Nick Stolpman, 34, of Fargo, said he rode to the Sturgis motorcycle rally this year on a 2007 Kawasaki Vulcan. For the most part, he has enjoyed his time in the Black Hills riding alongside other bikers. He said that while the disdain for foreign bikes has dulled, it hasn't vanished completely.

"You see signs like 'Jap bikes parking here," at a couple of the campgrounds, so maybe there's a little disrespect from Harley riders," Stolpman said. "But for most part, it's about the ride, not what you ride."

A group of bikers walk past a Kawasaki Ninja motorcycle during the Sturgis motorcycle rally. Despite being a Harley-Davidson centered event, sport bikes have been more accepted since the rally began 74 years ago.

A biker rides a Yamaha motorcycle past a line of parked bikes while finding a place to park on Main Street at the Sturgis motorcycle rally. Riders of non Harley-Davidson motorcycles at the rally have become more accepted over the years .