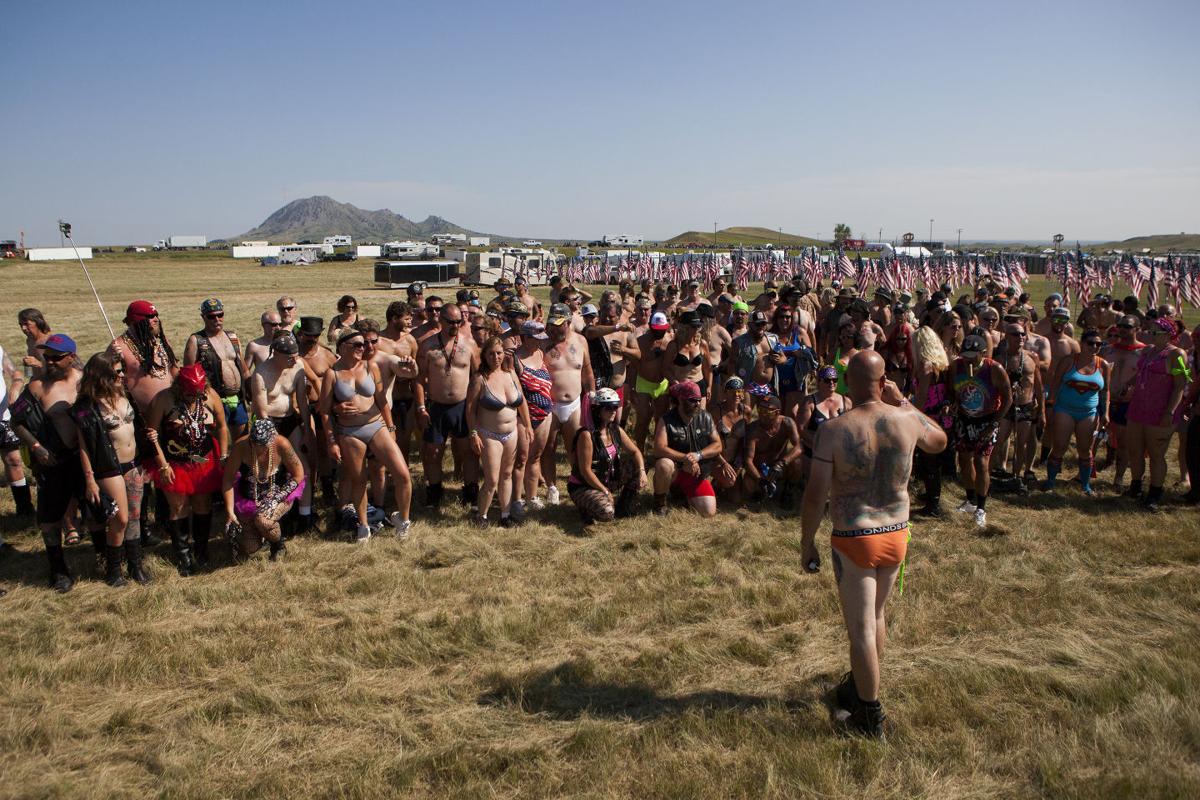 Participants in the attempt to break the world's record for the largest congregation of people in only underwear gather for a group photo Wednesday morning at the Buffalo Chip Campground. 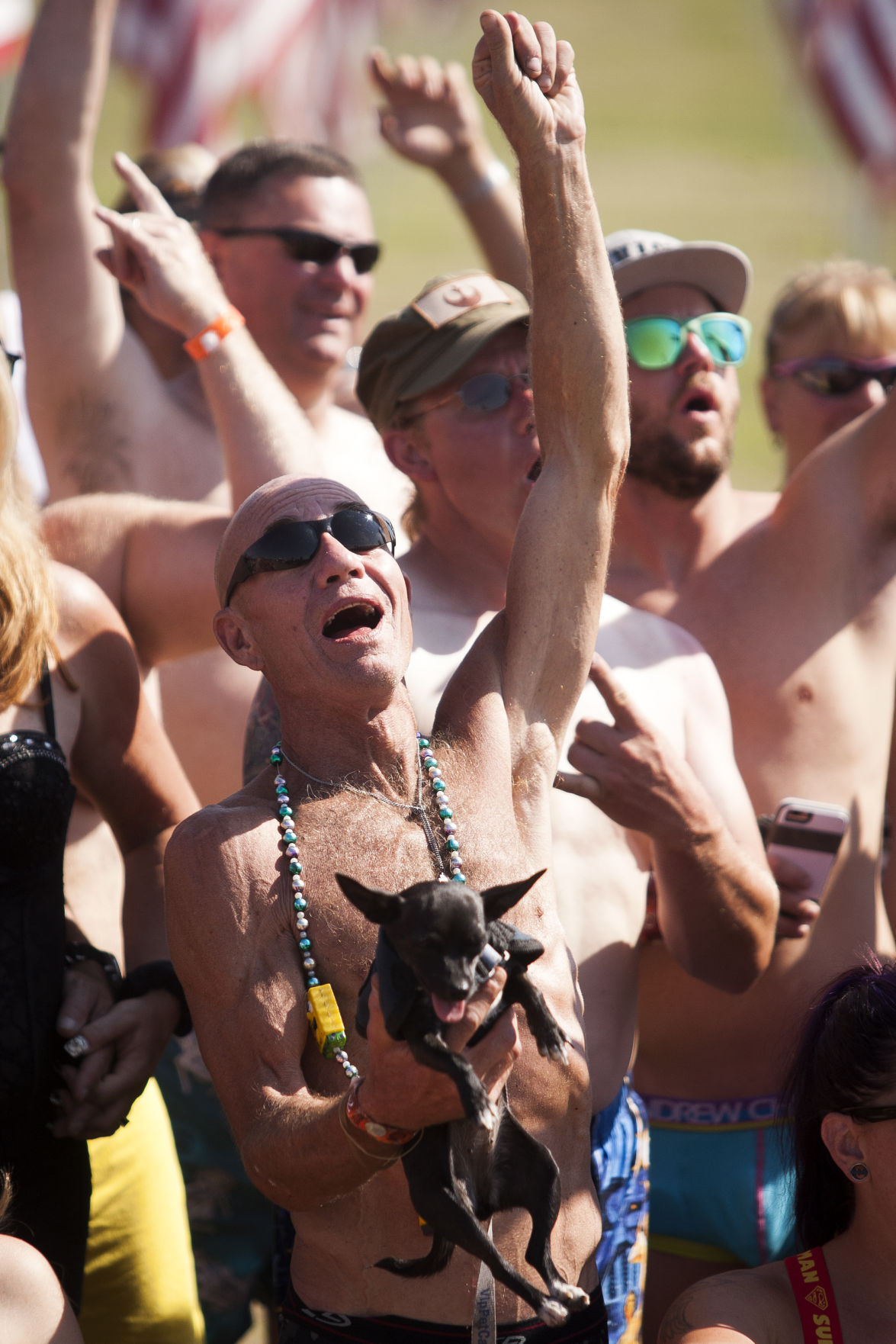 John Viccarone of Cleveland, Ohio holds his dog Coco as he and 181 others celebrate Wednesday morning at the Buffalo Chip Campground during the unsuccessful attempt to set a world record for the number of people clad in only underwear.

STURGIS | There are some things that you hope never to see and that no quantity of alcohol or prescription medications can ever erase from your memory.

Such was the case Wednesday morning at the Buffalo Chip Campground, when the least modest rallygoers attempted to set a Guinness World Record for the most people ever assembled in one spot wearing only their underwear, proving that if you think about it long enough, you probably can set a world record for doing something totally unremarkable.

The previous record of 2,270 was set in Salt Lake City, a bastion of conservatism, though no one could say when, according to Wednesday’s event organizer Greg “Aussie” Stilton, of Rapid City, a transplant from Down Under with a penchant for underwear. He and his wife, Jennie, who has competed in four Buffalo Chip poster model contests, married at the massive campground-turned-town in 2011.

“We thought this would be a comical way to set a world record,” Jennie said, giggling. “It’s very unusual to see this many bikers running around in their skivvies at this time of the morning and on the way up from the campground earlier, we were getting that 'Walk of Shame' look.”

Mark Goldstein, a 61-year-old Marine Corps veteran from L.A., clad only in a USMC bandana, biker boots and a neon green thong, said he was interested in helping set a new milestone for something zany.

"Driving my bike through 500 miles of rain from St. George, Utah, into Wyoming, this is what kept me going,” Goldstein explained.

“It’s all odd,” he added. “This is not normal. You don’t run around in your underwear. Where else but Sturgis could you do this?”

Meanwhile, a boisterous man in black top hat, white beard and black bikini briefs was two-fisting Budweisers at 10 a.m. and swinging on a nearby pole reserved for much slimmer, female strippers. He shouted in his best brogue, “I’m John Crawford from Scotland, and I generally don’t wear this much clothes.” His effort garnered a few $1 bills.

A shapely 41-year-old blonde from Cheyenne, Wyo., who asked not to be named for fear her mother would see it, was clad in a white bra, white pumps, a white garter belt holding up knee-high white stockings and a carefully placed white triangular patch. When asked, she said she really wasn’t going for the wedding night theme.

“I was talked into this by my friends,” she admitted, laughing. “I said, `You are doing what?’”

One cowboy wearing bright yellow cowboy boots, a snake-skin thong and Oakleys looked perplexed, and said his biggest challenge was finding a place to put his cell phone.

“I should have bought bigger boots,” he said.

All told, 182 underwear-loving rallygoers assembled for a quick photo and an attempt that fell well short of the world record.

A few of these partners in pantidom even left without their underwear, but none departed without a smile. After the failed attempt, they mounted their motorbikes for the “Bare Butt Ride” past Bear Butte and their final destination, the Beaver Bar, for a meet-and-greet.

Participants in the attempt to break the world's record for the largest congregation of people in only underwear gather for a group photo Wednesday morning at the Buffalo Chip Campground.

John Viccarone of Cleveland, Ohio holds his dog Coco as he and 181 others celebrate Wednesday morning at the Buffalo Chip Campground during the unsuccessful attempt to set a world record for the number of people clad in only underwear.