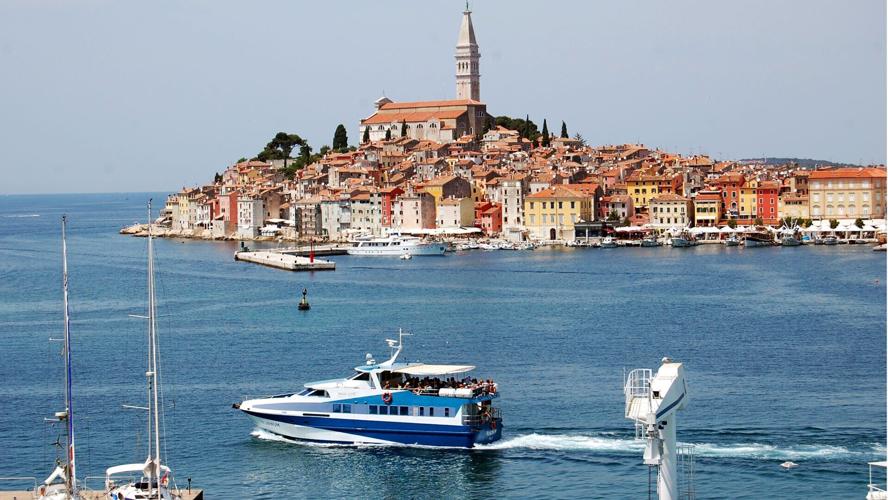 Croatia’ s romantic Rovinj has Venetian vibes, but a breezy charm that’ s all its own. 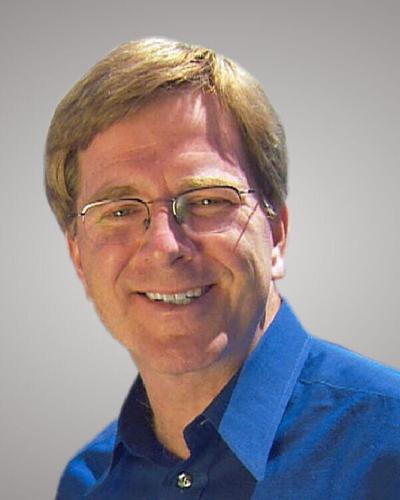 The Istrian Peninsula, in the northwest corner of Croatia, is an inviting mix of pungent truffles, Roman ruins, striking hill towns, and pastel coastal villages, with a breezy Italian culture (left over from centuries of Venetian rule).

While the wedge-shaped Istrian Peninsula has many tacky and forgettable resort towns, the seafront port of Rovinj – like a little Venice on a hill – is one of my favorite small towns on the Mediterranean.

Rising dramatically from the Adriatic as though being pulled up to heaven by its grand bell tower, there’s something particularly romantic about Rovinj (roh-VEEN). Some locals credit the especially strong Venetian influence here – it’s the most Italian town in Croatia’s most Italian region. Rovinj’s streets are delightfully twisty, its ancient houses are characteristically crumbling, and its harbor still hosts a real fishing industry.

Pula, on the other hand, isn’t quaint. Istria’s biggest city is an industrial port town with traffic, smog, and sprawl – but it has the soul of a Roman poet. Between the shipyards, you’ll discover some of the top Roman ruins in Croatia, including its stately amphitheater – a fully intact mini-Colosseum that marks the entry to a seedy Old Town with ancient temples, arches, and columns.

Of the dozens of amphitheaters left around Europe and North Africa by Roman engineers, Pula’s is the sixth largest, and one of the best preserved anywhere. Throughout the Middle Ages, scavengers scraped the amphitheater as clean as a nice slice of cantaloupe, leaving just the outside intact. Standing inside, though, you can imagine when it was ringed with two levels of stone seating and a top level of wooden bleachers. You can still see the outline of the actual arena (sandy oval grounds) with the small moat – just wide enough to keep the animals off the laps of those with the best seats, but close enough so that blood still sprayed their togas.

Like most Roman towns, Pula had a forum, or main square. Twenty centuries later, Pula’s Forum still serves the same function. The Temple of Augustus, which faces the square, took a direct hit from an Allied bomb in World War II, but was rebuilt after the war. (I asked my guide if it was an American bomb that destroyed the temple, and he answered sheepishly, “Yes, a little bit.”)

Most tourists in Croatia focus on the coast. For a dash of variety, head inland to check out the hill towns. My favorite two are tiny, rugged, and relatively untrampled: the artists’ colony of Grožnjan and popular Motovun, with sweeping countryside views.

Grožnjan (grohzh-NYAHN) is a trapped-in-a-time-warp Istrian hill town. Its setting, artfully balanced on the tip of a vine-and-olive-tree-covered promontory, is pleasing, if not thrilling. Not long ago, Grožnjan was virtually forgotten. But now artists have taken up residence here, keeping it Old World but with a spiffed-up, bohemian ambience.

Dramatically situated high above vineyards, Motovun (moh-toh-VOON, population: about 1,000) is the best-known and most-touristed of the Istrian hill towns. And for good reason: Its hilltop Old Town is particularly evocative, with a colorful old church and a rampart walk with spine-tingling vistas across the entire region. It’s hard to believe that race-car driver Mario Andretti was born in this tranquil little traffic-free hamlet.

As you explore, you’ll see frequent signs for wineries, olive-oil producers, and truffle shops. One recent trend in Istria is the emergence of agroturizams. Like Italian agritrismi, these are working farms that welcome tourists for a taste of traditional rural life.

Opatija (oh-PAH-tee-yah), just outside of the peninsula, is not your typical Croatian beach town. In the late-19th-century golden age of the Austro-Hungarian Empire, this unassuming village was transformed into the Eastern Riviera, one of the swankiest resorts on the Mediterranean. While the French, British, and German aristocracy sunbathed on France’s Côte d’Azur, the wealthy elite from the eastern half of Europe – the Hapsburg Empire and Russia – partied in Opatija.

While the Hapsburgs and Russians are long gone, Opatija retains the trappings of its genteel past. Most of Croatia evokes a more ancient Mediterranean, but Opatija whispers “belle époque.” With its welcoming and elegant promenade, it may be the classiest resort town in Croatia, with more taste and less fixation on postcards and seashells.

The local tourist board is carefully manicuring this region’s image as the hot spot in Croatia to find hill towns, back-country drives, and a laid-back and relaxing lifestyle. You’ll hear a lot about Istria. These days, some travelers even mention Istria in the same breath as Tuscany or Provence. While that may be the region’s malvazija wine and truffle oil talking, Istria is a delight.

(Rick Steves (www.ricksteves.com) writes European guidebooks, hosts travel shows on public TV and radio, and organizes European tours. This column revisits some of Rick's favorite places over the past two decades. You can email Rick at rick@ricksteves.com and follow his blog on Facebook.)

Why cats love to sit on laptops

Too many holiday-themed coffee drinks? How to avoid a sugar crash

Too many holiday-themed coffee drinks? How to avoid a sugar crash

How to save money on pet ownership

How to save money on pet ownership

When's the best time to use frequent flyer miles to book flights? 2 economists crunch the numbers

Using frequent flyer miles can ease the blow to your wallet. But is there an optimal time to use miles? Here's what two economists found out.

Headed home today? These US airports have the most delays

You might want to avoid these airports if you want your trip to get started on time.

“So are you having any sleep issues? Nightmares?”

Gas prices falling for holidays. Here's how much lower they could get

As Qatar welcomes more than a million fans for the monthlong World Cup, even its camels are working overtime.

There’s a spot in Paris where I like to share my macarons. Pulling the ribbon on the tiny box — gilded with tradition and a flair for good living — and sharing them here is the perfect start for a double date with my favorite travel partner and my favorite city.

Why booking directly with airlines can be more expensive

Pandemic rebooking issues drove many air passengers to book directly with airlines instead of third-party travel sites. While ancillary fees have become a major part of airline revenue over the past 15 years, airlines have more recently ramped up efforts to drive revenue from add-on fees. Customers could end up paying more when booking directly with airlines because of the aggressive push toward extra upgrades, combined with seat selection and baggage fees. Online travel agencies such as Expedia and Kayak may help travelers save money because they offer better comparison shopping, which helps travelers choose the lowest overall cost, not just the lowest base cost.

Croatia’ s romantic Rovinj has Venetian vibes, but a breezy charm that’ s all its own.