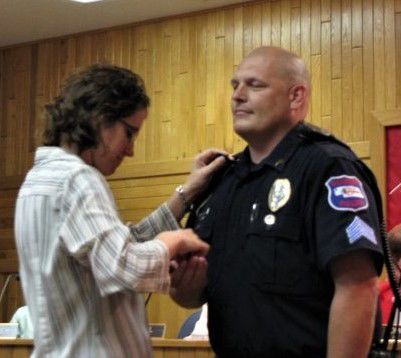 Banzhaf's wife, Jodi, pins on Shawn's collar brass as he becomes a member of the Chadron Police Department. 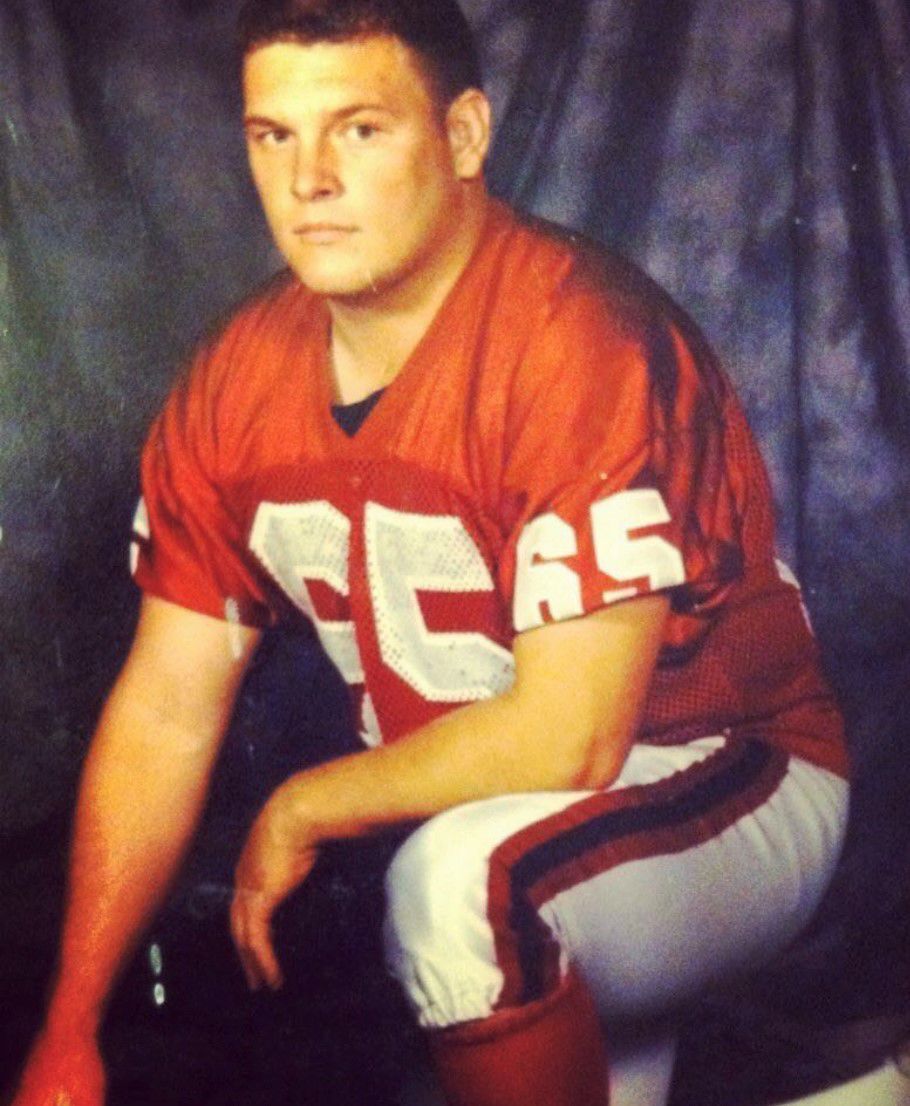 Banzhaf originally came to Chadron on a football scholarship. 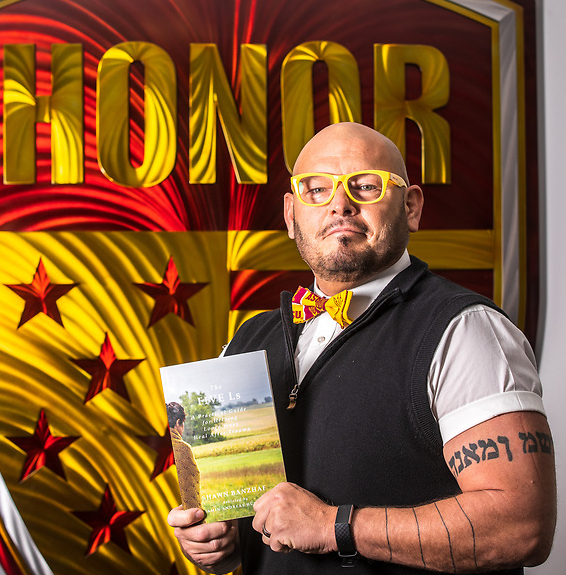 Banzhaf, who now works at Arizona State University, stands with a copy of his book.

A Chadron State College alum is seeking to help people understand trauma and help those they care about with his book “The Five Ls: A Practical Guide for Helping Loved Ones Heal After Trauma.”

Shawn Banzhaf graduated from Lexington Senior High in 1990 with a football scholarship to come to Chadron State and play for Brad Smith. It was here he met with his future, Jodi, and the two started having children so he put his schooling on hold for a few years. Jodi would later graduate in 2004; Shawn in 2010. The couple’s children are also CSC alumni.

While in college, Banzhaf earned his degree in Interdisciplinary Studies, focusing on Criminal Justice. He was active with the Chadron Police Department from 2001-2009, being Chadron’s first community school resource officer. He noted he went up the ranks with current Police Chief Rick Hickstein, though Banzhaf left the CPD as a sergeant.

Also while in Chadron, Banzhaf was also a member of the 1057th Transportation Company with the Army National Guard.

“It was a good career,” he said of working with the CPD. “I loved working for the City of Chadron and being on the police force there. It was an honor to be able to do that. I made a lot of lifelong friends and really appreciate them all.”

Banzhaf went on to become the assistant director of student success for the Pat Tillman Veteran Center at Arizona State University, working with more than 10,000 students.

As for the inspiration for his book, Banzhaf explained that he deployed with the 1074th out of Sidney from 2006-07. “I fought in the war, spent 15 months away from Jodi and my kids. I came home, and had all the symptoms of post-traumatic stress. I was a tough deployment, and when I came home there were a lot of struggles.”

Though never diagnosed with Post-Traumatic Stress Disorder (PTSD), Banzhaf noted his deployment still impacts him, particularly around holidays such as Independence Day.

While working as the senior military advocate at the Pat Tillman Veteran Center, Banzhaf had a student come in that had all the signs of PTSD. “I could tell it on him,” he said, “and then he divulged to me that he had it. I realized, at that moment, even though I have my own PTSD journey I felt not equipped to help him. I thought, ‘If I am the senior military advocate and I don’t have the tools to help this student, how can we expect anybody at ASU, staff and faculty, to help.’”

Banzhaf came up with “The Five Ls” to help veterans, and to be something of a practical guide for people to care for loved ones who have PTSD. The five Ls, — Love, Listen, Learn, Lessen and Lead — are things his wife did for him when he returned from his deployment, he said, though they didn’t have the names for them at that time.

“I realized she was the muse for the whole thing,” Banzhaf said of his wife. Additional assistance came from a friend, Jamin Hubner, who helped Banzhaf with research and making his initial thoughts and story into more of a scholarly work.

The book is also to honor his Chadron friends and family. “A lot of the community did a lot of the things in this book for me,” Banzhaf said. “They loved me, they listened to me, they did all of the things that I lay out. That’s something beautiful about smaller communities. They take the time for you.”

As for the book’s impact, Banzhaf noted he’s had people tell him they read the first chapter and know it’s going to change their lives. One example, he noted, is a wife whose husband is a firefighter with PTSD. The book, she said, made her feel like she had the tools to help him in his struggle.

“To have someone reach out to you and say things like that, it’s pretty powerful,” Banzhaf said, adding that his big dream is that people understand that trauma is common. It might not be from serving in the military, in law enforcement or as a firefighter, but cam come from other sources such as childhood abuse.

“Just think about the trauma of becoming a teenager and going through high school. There’s so many different spaces where I’m trying to help people see trauma is something that’s all around them and each of us has this opportunity to help.”

Banzhaf also wants to decrease the suicide rate of veterans. He lost a member of his unit in his deployment, he said, but another three to suicide since their return home. He emphasized that his books is not just for those with PTSD, but those who have experienced any physical, mental or emotional trauma.

Banzhaf said when approaching someone who’s undergone trauma, the first step is to choose to care. “I see this as a lifestyle. If you can find it in your heart and mind to do that, everything else can radiate from there.”

Speaking to the city that was his home for several years, Banzhaf said, “I want to send my gratitude to the community of Chadron, for who they were for the 24 years I was a part of that community, and what they continue to be for my family.” His son, daughter-in-law and grandsons are Chadron residents. “I know they’re safe and they’re taken care of.”

“The Five Ls: A Practical Guide for Helping Loved Ones Heal After Trauma” is available online at shawnbanzhaf.com

Fall is on the horizon, and with it is the return of the Harvest Moon Fall Festival. Though this year marks the ninth for the event, it’s only…

Thursday night at the Holiday Inn Express and Suites, Mike Works and Makinsey Manning with REV Development, the company that built the hotel, …

Every year Chadron Middle School Library Assistant Maria Wolleson puts together a display about 9/11 and its importance. “This is a busy hallw…

As part of the Chadron City Council’s Sept. 7 meeting, Rick Arnold, wildlife biologist for the Game and Parks in the Ponderosa Wildlife Area p…

Following hearings on the 2021-22 school budget and tax request, during which no public comment was given, the Chadron Public Schools Board of…

At their Tuesday, Sept. 6 meeting, Chadron City Council formally approved the budget for the Fiscal Year 2021-22. The budget takes a significa…

Though the summer heat has been near unbearable some days, a new downtown business has been helping people cool off. Though the most prominent…

The City of Chadron, in its continued efforts to keep the city a comfortable and attractive place to visit and live, will be working with resi…

Folks will have the chance to be named Chadron Griddle Master on Sunday, Sept. 19, in the Blackstone Battle at the Chadron Ace Hardware parking lot.

Banzhaf's wife, Jodi, pins on Shawn's collar brass as he becomes a member of the Chadron Police Department.

Banzhaf originally came to Chadron on a football scholarship.

Banzhaf, who now works at Arizona State University, stands with a copy of his book.