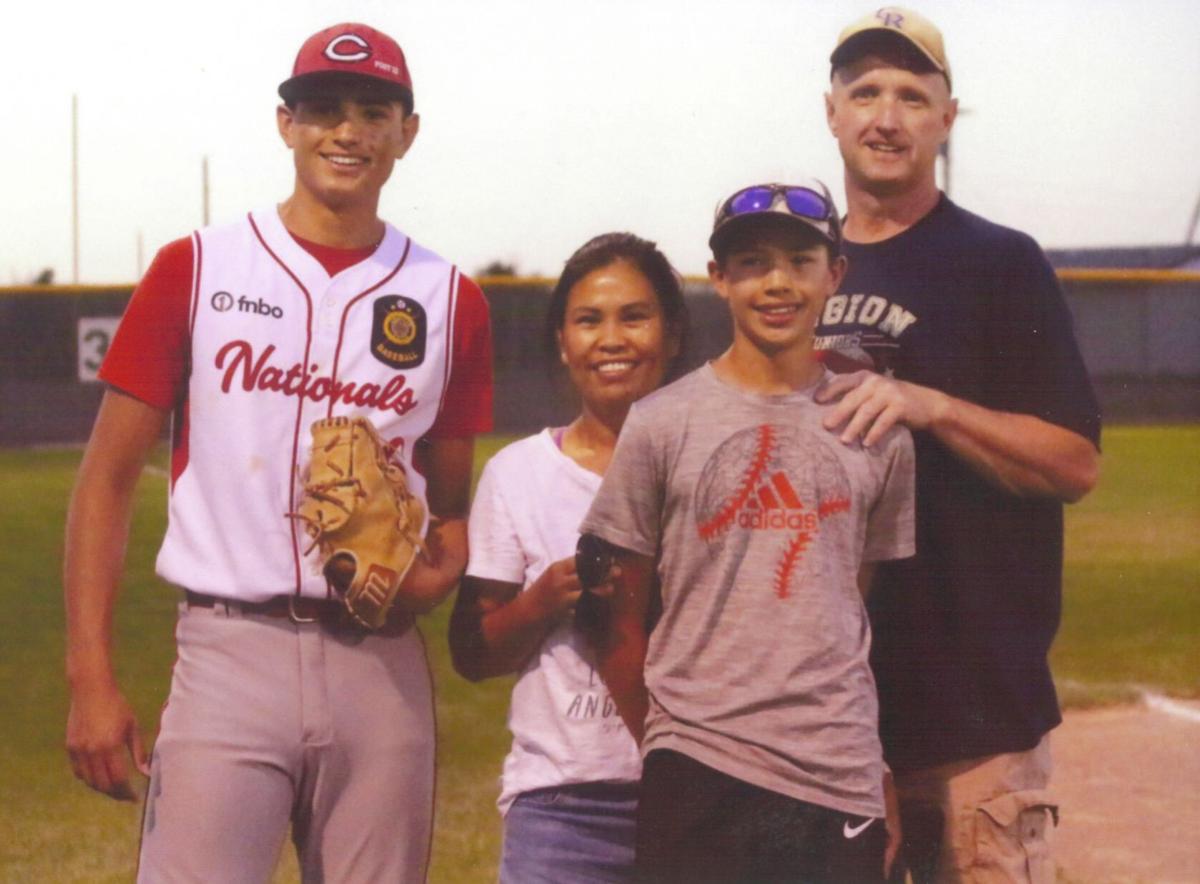 The Dan and Myra Frye family is completing its move from Chadron to Albuquerque this week. Shane will be a high school junior and Tristin a seventh grader. 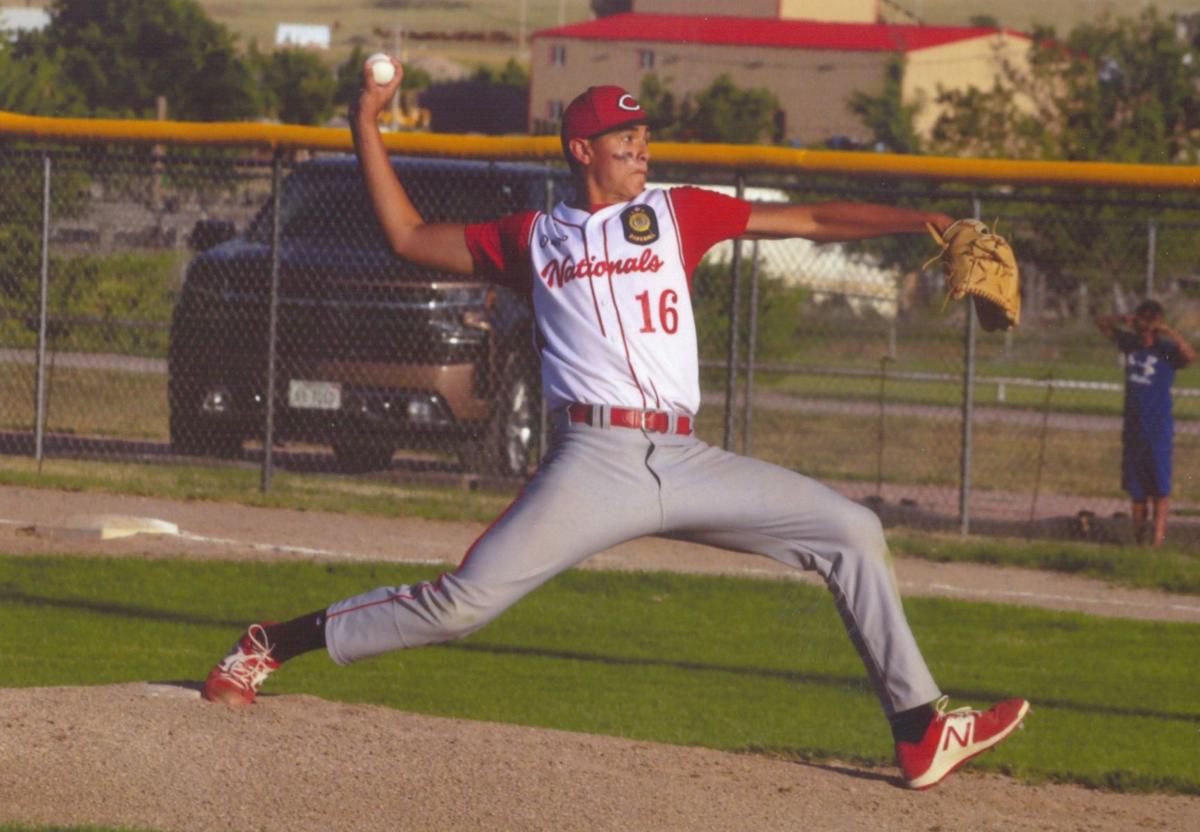 Shane Frye, shown pitching in a late-season game, was the ace of Chadron’s First National Bank-Omaha American Legion Juniors baseball team this summer. He also played first and third base. By moving to New Mexico with his family, he’ll be able to play baseball in both the spring and summer.

The future of Chadron’s baseball program took on a bright hue when the Juniors won the Panhandle COVID Tournament in dramatic fashion the weekend of July 17-19. Numerous players with at least two years of American Legion eligibility remaining contributed to the rousing success story that saw the Nationals win their final four games in the tourney.

But the Chadron baseball outlook also took a hit this summer. That’s because one of the top young players, Shane Frye, along with his parents, Danny and Myra Frye, and their younger son, Tristin, are in the process of moving.

Danny Frye, a lifelong Chadronite, has risen through the ranks in the U.S. Forest Service, and has accepted a promotion as the occupational health and safety manager for three national forests in New Mexico. The Fryes will live in Albuquerque where Shane will attend Eldorado High School. He’ll be a junior this year and is looking forward to joining the Golden Eagle baseball team.

Shane proved this summer that he’s an outstanding prospect, maybe one of the best Chadron has had. He was the Junior Nationals’ ace this summer, compiling a 4-0 win-loss record and a 1.95 earned run average. He gave up just 16 hits in 28 2/3 innings on the mound, struck out 39 batters and walked only 10. He also was the winning pitcher during a Seniors’ game early this summer.

At 6-foot-3, about 175 pounds as he approaches his 16th birthday, Shane can throw hard. He’s also developed a curve ball and a change-up, and his coaches, Bruce Parish, Colby Ellis and Connor Blumenthal, say his control and placement also are outstanding.

“He can ‘spot’ pitch,” Parish said. “He can put it where he wants it to go. Not many kids his age can do that. Besides that, he’s always locked in and ready to play. He’s a hard worker who cares. Sometimes we had to back him off. When we started winter workouts in January, he already wanted to throw 100 pitches. We had to limit him to 50.”

It’s no surprise that Shane likes to pitch. So did his father. Danny was one of Chadron’s top Legion pitchers in the late 1980s. But there was one major difference. Danny was a lefty and Shane throws right-handed. There’s also a similarity. Baseball is the only sport either of them was or is much interested in playing.

Danny acknowledges that he’s been working with Shane for a long time, dating back to tee-ball. Things got more serious last fall, when the two of them spent nearly a week attending a pitchers’ camp at the Texas Baseball Ranch at Galveston.

Veteran coaches were in charge. They worked with Shane on all aspects of pitching and also provided the Fryes with information on workouts Shane could do the year-round. So, last winter the father and son went to the Nelson Physical Activity Center at Chadron State College several days a week and followed the plan.

One of Danny’s Legion coaches in Chadron was Mike Max, a two-time All-American heavyweight wrestler at Chadron State and also a baseball enthusiast. Contacted in Burwell where he now teaches and coaches, Max said he remembers Danny well.

“He was about 6-foot-5 and was skinny, pretty much all arms and legs,” Max said. “He could throw hard. If he’d stayed healthy, he’d been a force. But he had elbow problems when I coached him and sometimes he could throw only an inning or two.”

After graduating from Chadron High in 1988, Danny attended York College to play baseball. But early in the season his first year there he was on the mound when he suffered a broken bone in his left arm, ending his pitching career. Apparently the problem started with a stress fracture, caused perhaps because he had not been throwing with the proper arm angle.

Thankfully, Shane has not experienced any arm trouble and his dad wants to make sure that doesn’t happen. The instructions they received in Texas are designed to help prevent it. Arm health and durability are high on the program’s list of goals.

It’s interesting how Danny and his wife met. Myra was born in the Philippines, halfway around the world from Chadron. They found each other on a Christian dating site on the internet in 2000.

After two years of exchanging e-mails that they remember got more chummy as times went on, Danny made a date to fly to Taiwan, where Myra was working in quality control at an electronics plant. The flight was delayed by the horrific events of Sept. 11, 2001, and had to be reset for later in the month.

“When 9-11 happened and the passenger planes were grounded for several days, I was afraid he’d never come see me, but a couple weeks later he made it,” Myra related. “I was happy we finally got to meet in person. We got along really well. I came to Chadron the following year and we got married. It’s worked out well.”

Tristin also likes baseball and hit well in Chadron’s Major League this summer, but so far prefers playing shortstop to pitching. He will be a seventh grader this fall.

Since English is taught in the Filipino schools, Myra speaks and writes the language well. She proudly became an American citizen five years after arriving in the U.S.

Both Myra and Danny have advanced rapidly in their careers. She has worked at the Chadron Community Hospital nearly 15 years, despite taking some time off when the boys were born and also to take the training to become a registered nurse.

She started working at the hospital in the kitchen, went to admissions and then to billing. In 2011-12 she took a few courses at Chadron State, then spent a year taking prerequisite courses in Alliance and two years at the Regional West Medical Center in Scottsbluff to become an RN. She completed the training two years ago and has worked at the Chadron Hospital since then.

Danny initially worked at the Pine Ridge Job Corps Center for 14 years, starting as a dormitory supervisor, became a maintenance instructor and then a safety officer. Four years ago, he moved to the Forest Service office in Chadron and worked as a forest and grassland safety manager.

To earn the promotion to New Mexico, he said he has to know and be able to interpret hundreds of OSHA (Occupational and Safety Administration) regulations. The three national forests he will be involved with are Cibola, Santa Fe and Carson. Each contains about 1.5 million acres.

“There’s lots of desert, but also lots of timber and logging,” Frye said, adding that he’ll be an advisor to workers, and probably won’t have much to do with trees.

He noted his promotion came after he completed his bachelor’s degree at Chadron State College in May 2019. “Finishing my degree was a big help,” he said.

Danny added that while he and his family are looking forward to living in an area with milder winters, they know they will miss his parents, Dan Sr. and Connie, who are retired, and also his younger brother, Tim, the administrator of Prairie Pines Lodge, his wife, Leah, a pharmacist at the hospital, and their son, Mason, who also loves baseball.

Danny and Tim’s sister, Colette Wagner, and her husband live in Kentucky.

“We’re leaving behind lots of great memories here, but we’re also anxious to get settled in New Mexico,” Danny said.

The Blue teams swept past the Reds during the Panhandle Prep basketball games played at Cougar Palace in Scottsbluff last Friday night.

The Dan and Myra Frye family is completing its move from Chadron to Albuquerque this week. Shane will be a high school junior and Tristin a seventh grader.

Shane Frye, shown pitching in a late-season game, was the ace of Chadron’s First National Bank-Omaha American Legion Juniors baseball team this summer. He also played first and third base. By moving to New Mexico with his family, he’ll be able to play baseball in both the spring and summer.