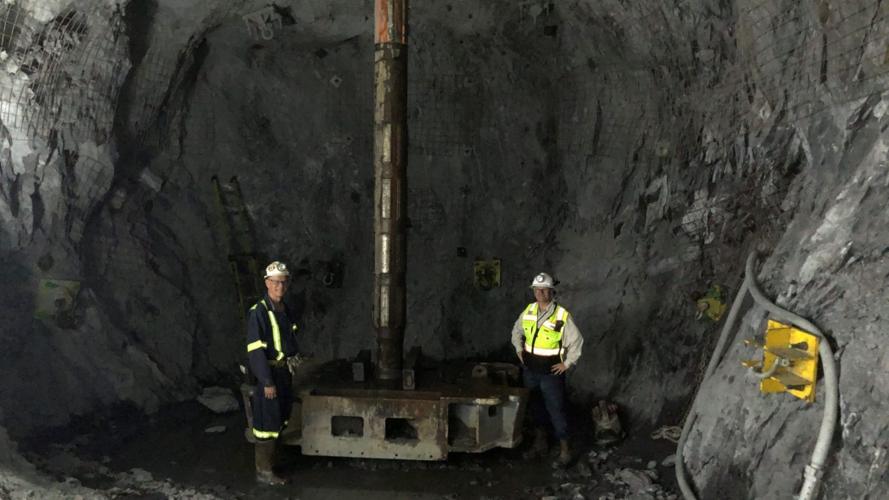 Fermilab LBNF engineers James Rickard and Syd Devries stand beside the 12-foot reamer at the 4,850-foot level, showing the enormous size of the reamer bit used to drill the ventilation shaft. 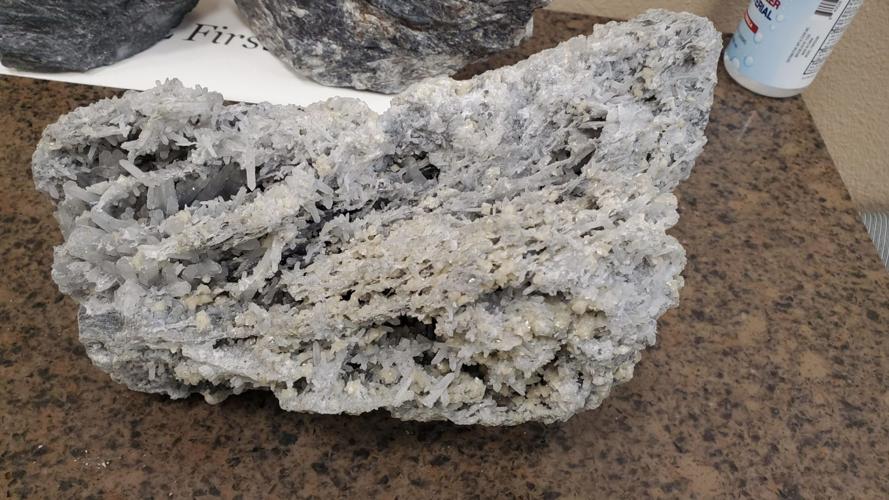 A quartz crystal vein was intercepted at the 4,550-foot level. The crews were amazed the quartz crystals were not destroyed by the reamer’s cutting wheels.

Thyssen Mining excavation crews in Lead are preparing the Long-Baseline Neutrino Facility for the Deep Underground Neutrino Experiment known as DUNE, hosted by the U.S. Department of Energy’s Fermi National Accelerator Laboratory and supported by the DOE Office of Science. In a project that requires the excavation of 800,000 tons of rock, they have carefully navigated the challenge of the raise-bore drilling stage.

On Oct. 4, crews achieved an important project milestone by completing the raise-bore excavation of the quarter-mile vertical ventilation shaft on schedule, paving the way for lining the circumference of the shaft with sprayed concrete.

Raise boring is used to create a circular vertical excavation area between an upper and lower level. For this project, the vertical ventilation shaft will first serve as the opening to improve the flow of air needed for excavation. Later, nearly a mile underground at the 4,850-foot level, where the main construction work will take place, it will provide future cooling for the LBNF/DUNE experiment.

Starting in June, a 1,200-foot-long pilot hole slightly more than a foot in diameter was drilled from the 3,650-foot level down to the 4,850-foot level to prepare the area for the raise bore. A massive 12-foot reaming bit made of tungsten carbide with a steel frame, attached to steel rods called drill string, was then employed and slowly pulled back to ream to the full size of the raise-bore shaft.

James Rickard, the Fermilab resident engineer supervising the LBNF excavation, said he has performed raise boring previously for other projects at 300 feet, but alignment of the pilot hole for a 1,200-foot job was considered one of the biggest risks of the LBNF project. Using a high-quality, German-made directional bit for the pilot drilling helped to mitigate the risk.

During the entire four-and-a-half-month process, only one reaming bit was used to chomp away at 1,200 feet of earth from early summer until its completion. Typically, each reamer is good for approximately 700 feet of drilling, and then a complete cutter change to replace it would cost to the tune of a couple hundred thousand dollars.

The excavation of the ventilation shaft finished safely and on schedule with one reamer.

Using the same reamer for the entire process without having to replace it once was not only an incredible feat for a 1,200-foot vertical drilling project, but it also revealed a geological treasure.

Much to the surprise of the crew, the reamer’s sensors detected that it struck an anomaly, which dropped 300 feet to the newly dug ground. It was found to be a large chunk of quartz crystal that measured 1 1/2 feet thick. Encountering a vein of quartz crystal isn’t overly rare during this process, but the quartz samples typically are damaged by it. This unexpected treasure, the largest Rickard has found to-date, was not damaged by the reamer head, nor by the 300-foot fall it sustained, marking it a gem of the milestone.

With the raise-bore process complete, the newly carved out area now needs to be washed and inspected so its surface can take the 4-inch layer of sprayed concrete coating that will line the ventilation shaft walls. Using 800 super sacks of dry shotcrete mix, with each bag weighing two tons, construction crews combine the shotcrete with water. The mixture is then transported down the raise in a pipeline with compressed air to robotically spray the concrete, slowly lining the circumference in layers from bottom to top.

While the concrete spray is underway, crews have started removing all the underground equipment used in the raise-bore process, disassembling each machine into individual components that will return to the surface.

Lining the ventilation shaft and transporting equipment components to the surface will take six weeks, and this project should be wrapped up by the end of December, a timeline, Rickard said, “is the best Christmas present!”

Fermilab LBNF engineers James Rickard and Syd Devries stand beside the 12-foot reamer at the 4,850-foot level, showing the enormous size of the reamer bit used to drill the ventilation shaft.

A quartz crystal vein was intercepted at the 4,550-foot level. The crews were amazed the quartz crystals were not destroyed by the reamer’s cutting wheels.