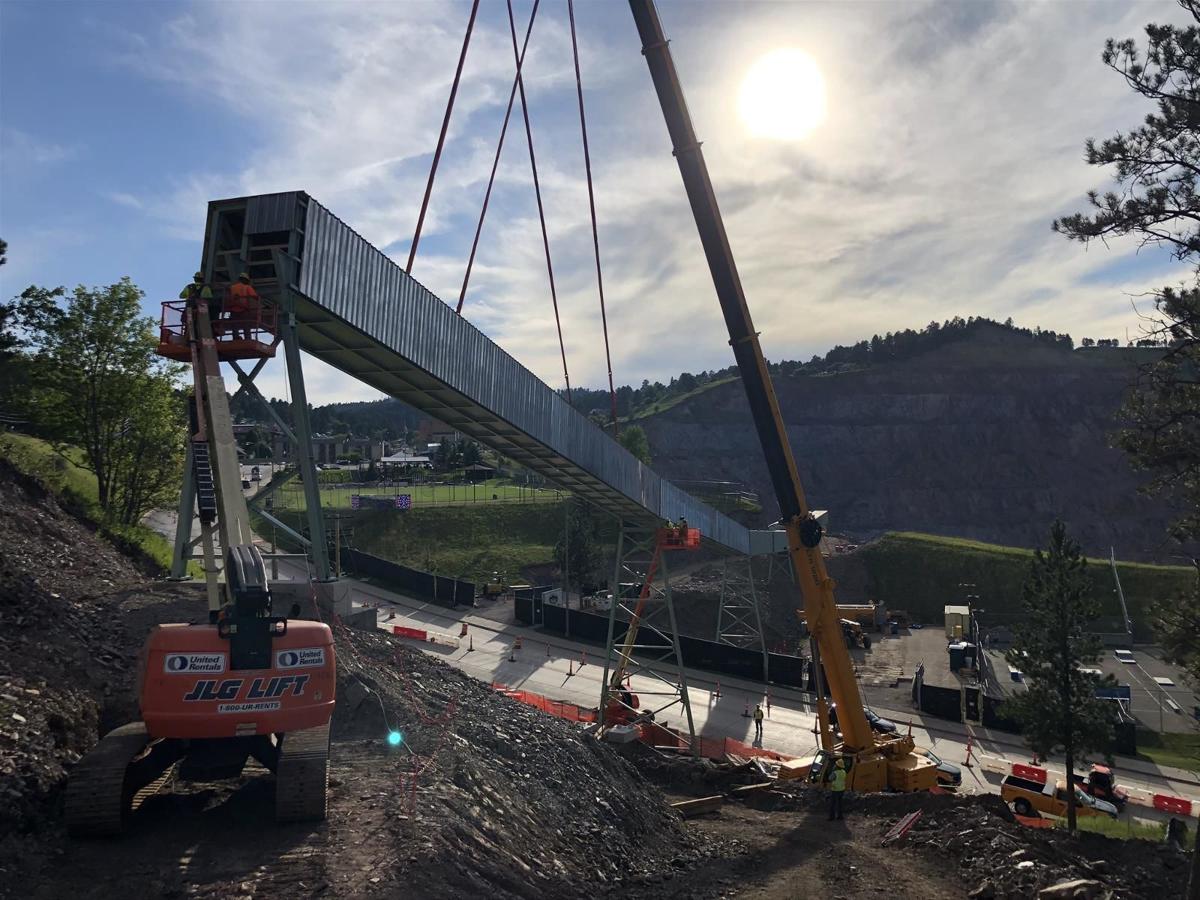 Crews with Kiewit-Alberici Joint Venture install the conveyor truss over U.S. Highway 85. The truss is about 8-by-8 feet around and will be about 1,800 feet long. 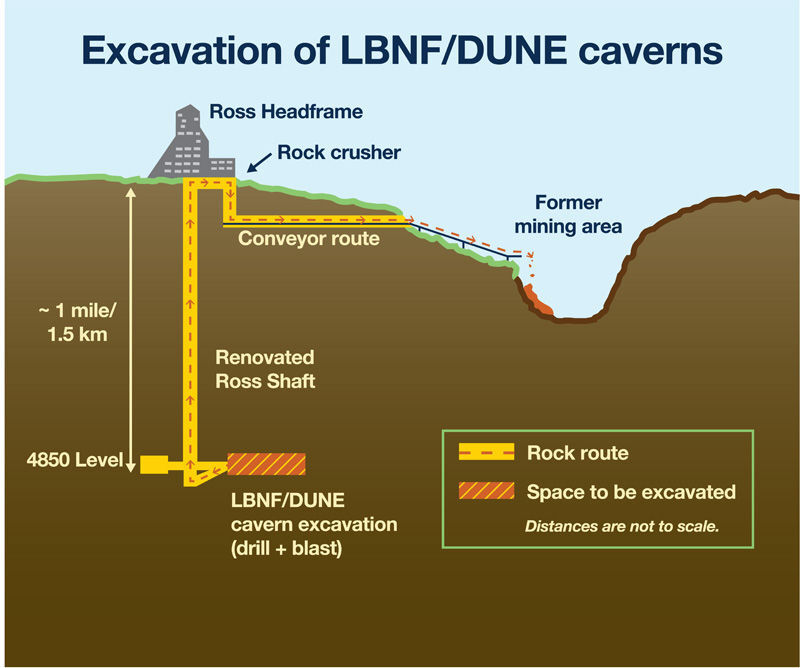 This graphic shows the path excavated rock will take from the 4850 Level to the Open Cut in Lead. 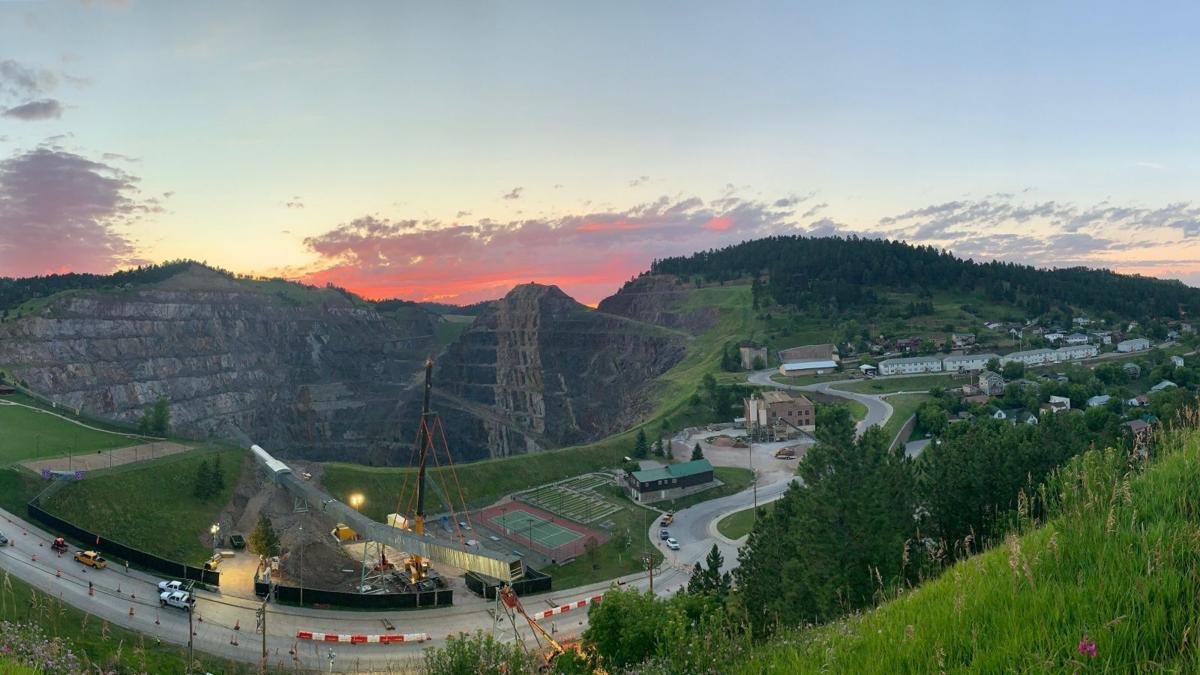 Crews use a crane to place a segment of the conveyor system on its support bents above U.S. Highway 85 in Lead. The Long-Baseline Neutrino Facility/DUNE project will use ore passages from the Homestake Goldmine. 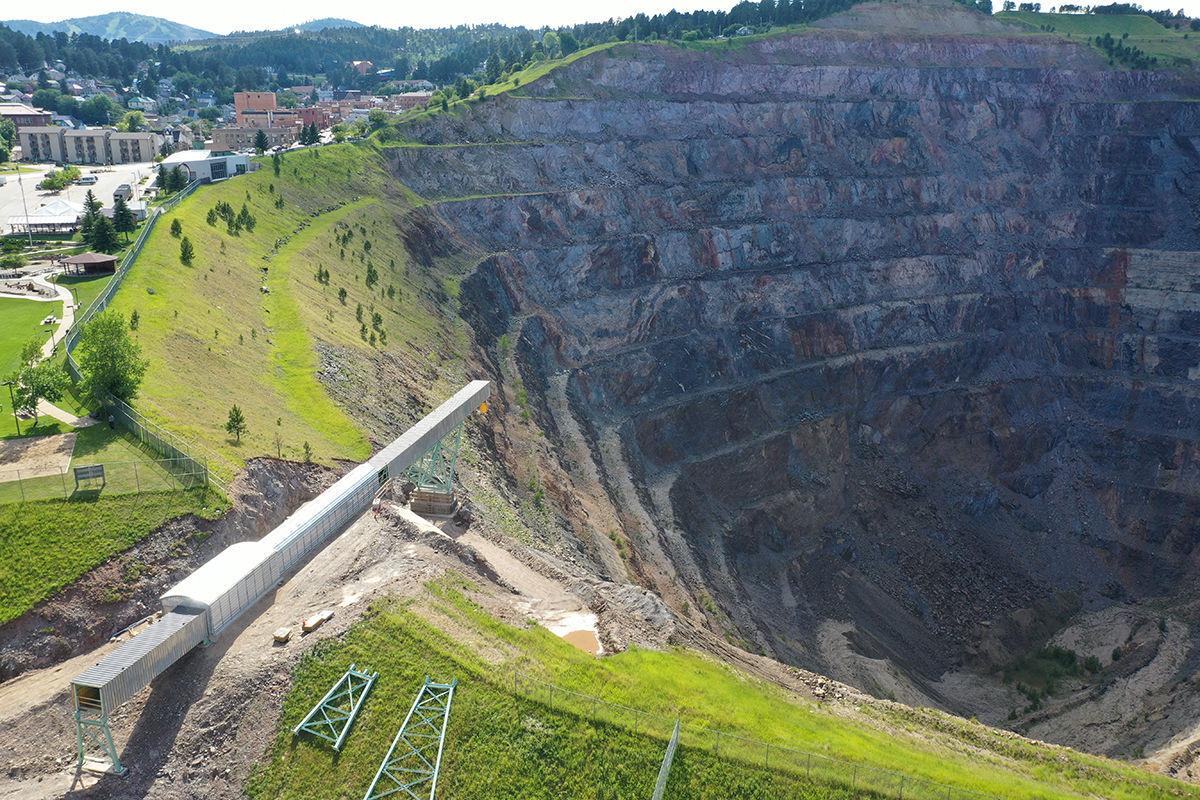 An overlook of the Open Cut is shown, where rock will be deposited from the 4850 Level excavation as part of the Long-Baseline Neutrino Facility/DUNE project.

LEAD | Although the conveyor over U.S. Highway 85 in Lead was installed as part of the Long-Baseline Neutrino Facility, Joshua Willhite said work won’t be completed on the system until the end of the year.

Willhite is the LBNF Far Site Conventional Facilities Design Manager working on the pre-excavation process of the LBNF/DUNE project, which is the international flagship experiment to better understand the universe and how it works.

The project includes the U.S. Department of Energy’s Fermilab hosting DUNE in partnership with agencies and more than 1,000 scientists. The experiment will host a particle detector at Fermilab in Illinois and one at the Sanford Underground Research Facility in Lead, which is about a mile underneath the earth’s surface.

The conveyor that people see as they pass through Lead will bring rocks from the 4850 Level of SURF and deposit them into the Open Cut, or an open pit mining area that was excavated by the Homestake Gold Mine in the 1980s.

Willhite said there’s about 800,000 tons of rock to excavate. It will go through the ore passage system that was used by Homestake.

“We’re not excavating ore,” Willhite said. “The rock we’re taking out has no value in terms of gold content.”

The old passage system isn’t the only thing being used for the excavation, though — the Ross Headframe and Ross Shaft will be used, and the conveyor over Highway 85 follows the same path Homestake used in the 1980s that was dismantled in the early 2000s.

Willhite said the conveyor has design aspects similar to that of the old conveyor, although it’s been updated to have today’s construction standards. He also said the headframe is so historically important to the area that the outside remains untouched, but is reinforced within.

The conveyor system people will see driving by, or underneath, on Highway 85 is actually the second of two that will be used in the excavation.

Willhite said there’s another conveyor that will operate from the tramway, which is on a separate underground level close to the surface, and drops rocks onto the second conveyor people can see. Together, the conveyors are about 4,200 feet long.

Before being put on the conveyors, though, the rocks are placed in buckets called skips at the 4850 Level and sent to the crushing system on the surface, where they’ll be reduced to 3 inches or smaller. Then they’re placed into a rock storage bin and fed to the tramway and the first conveyor.

Willhite said the conveyor people can see is fully enclosed, so there’s no danger of rocks, or maintenance engineers’ tools, falling onto the roadway or onto city parks.

The long metal tube people see is 8-by-8 feet around and the conveyor itself is only 3 feet wide, although SURF reported it should move about 1,500 to 2,500 tons of rock a day once it starts operating 10 hours a day.

Willhite said that may not be until summer 2021.

“There’s excavation underground right next to the shaft, and because it’s there, we can’t take that rock out until we get a certain amount done,” he said.

Willhite also said the surface conveyor was designed to protect against blizzards and is part of the area’s requirements. He said it’s more likely the system may have to shut down due to people not being able to get to work to operate it during the winter.

The excavation will be done by what’s traditionally called drill and blast excavation, which is similar to what was done at Homestake, he said.

“The difference is we care more about what’s left behind than we do about what we’re removing,” he said.

He also said the primary goal of excavation on the 4850 Level is to have three large caverns that will be 60 feet wide, 90 feet tall and 500 feet long. They will be the largest caverns at this depth in the world.

Two of the caverns will house the DUNE particle detectors. The third is for utilities, which includes systems for purifying the argon that goes inside the detectors.

He said when anything of this size is being built, a lot of work goes into the engineering design, but that’s why the area was selected.

“The rock here is excellent for excavation,” he said. “It’s not the same as the rock at Mount Rushmore or Crazy Horse, but that gives you an idea on the scale of rock in the Black Hills that can hold their shape with the excavation.”

He said they have no concerns about the rock during excavation. He is confident in the design that it’ll last 50 years without any major maintenance or repairs.

There’s also excavation happening right now at the 3650 Level, but it will be a 30-foot by 40-foot by 25-foot chamber that will host a raise bore machine that will drill a 12-foot diameter shaft to connect the two levels to provide direct ventilation.

Willhite said the ventilation is mainly for when diesel equipment begins to run, and will allow for circulation and a fan to pull the fumes and heat away from workers at the 4850 Level.

He said there’s enough natural ventilation on the level for people without equipment to breathe, although they’re still required to carry a self-rescuer which has a carbon-monoxide filter in case of a fire, and some produce oxygen.

Willhite said safety is a key factor in all of this. He noted that Kiewit-Alberici Joint Venture, the contractor for the pre-excavation work, has put worker and community safety first, including keeping road closures to the evening to “minimize impact to the community and trying to do things to be good neighbors.”

Correction: This article was corrected at 1:02 p.m. Aug. 6 to reflect the correct spelling of Joshua Willhite's name.

Crews with Kiewit-Alberici Joint Venture install the conveyor truss over U.S. Highway 85. The truss is about 8-by-8 feet around and will be about 1,800 feet long.

This graphic shows the path excavated rock will take from the 4850 Level to the Open Cut in Lead.

Crews use a crane to place a segment of the conveyor system on its support bents above U.S. Highway 85 in Lead. The Long-Baseline Neutrino Facility/DUNE project will use ore passages from the Homestake Goldmine.

An overlook of the Open Cut is shown, where rock will be deposited from the 4850 Level excavation as part of the Long-Baseline Neutrino Facility/DUNE project.